Hell or High Water [2016] – A Riveting and Ruminative Neo-Western 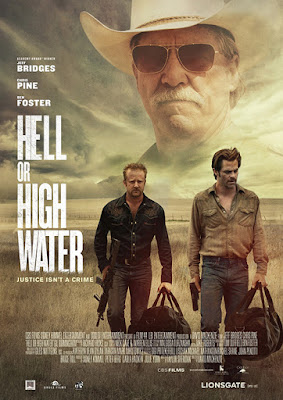 Sometimes an efficient screenwriter & director could use a very old story and still able to diffuse rich shades and profundity we don’t expect.  David Mackenzie’s “Hell or High Water” (2016) – written by ‘Sicario’ writer Taylor Sheridan – is one such surprising movie. This film has themes and moods of the heist/thrillers or crime/dramas, made in the 70s. It seems to be a marvelous hybrid of Peter Yates’ “The Friends of Eddie Coyle” (1973), Don Siegel’s “Charley Varrick” (1973), Peckinpah’s “The Getaway” (1972), and Cimino’s “Thunderbolt and Lightfoot” (1974). “Hell or High Water” could have easily turned into a gross imitation of those old American movies, spewing out the same stock themes. But, the reason why it is considered as one of the best American films of the year is because it sharply captures the real human emotions and the distinct, present-day regional attributes (of West Texas). Like all good crime movies, it makes you feel the sense of a place.  Taylor Sheridan’s script is subtle enough that viewers could just enjoy it as good-old heist movie as well as meditate on the socioeconomic factors plaguing the post-recession American south.

David Mackenzie’s direction finds a middle ground between Jeff Nichols’ earnest portrayal of white working class (in “Mud”, “Take Shelter”) and Andrew Dominik’s incendiary & a little on-the-nose depiction of economic collapse (in “Killing Them Softly”). While on paper, the characters seem to be stereotypes they are bestowed with fascinating humane shades and so their anxiety-ridden rants seem to be an organic development (unlike Brad Pitt doubly insisting on the theme in “Killing Them Softly” through his “America’s not a country” speech). The first few minutes of “Hell or High Water” works as a lesson for aspiring screenwriters on how to flesh out three-dimensional characters, despite working in a familiar story. The film opens on an arid, empty street of some West Texan town. As a woman slowly walks to open the doors of a bank, she (the bank employee) is confronted by two ski-mask wearing robbers to hand over the unmarked, small bills from the cash-drawers. It’s early morning and there are not many people to witness the robbery at Texas Midlands Bank. The bank robbers in question are brothers – Tanner (Ben Foster) and Toby (Chris Pine). They decide to hit another small branch of the same bank. That robbery also goes successful. They return to their ranch and bury the stolen car used for the robbery. 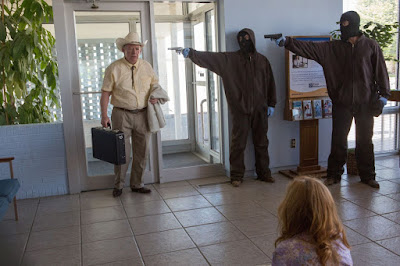 Soft-spoken, non-violent Toby is the man with a plan. Tanner is just a ticking bomb, who would embrace the opportunity to shoot at a person. Although he is a sociopath (recently out of prison), he has enormous love for his brother Toby. On one occasion, Toby asks “Why do you do it?” on why he has agreed with his robbery plan; to which Tanner casually says, “Because you asked, little brother”. This basic relationship dynamics between the brothers and the way the actors bring this out bridges over an emotional connection. Two veteran Texas Rangers -- Marcus Hamilton (Jeff Bridges) and Alberto Parker (Gil Birmingham) are on the pursuit. It is sort of a laid-back chase because the grizzled, drawling Ranger Marcus is on the cusp of retirement. He is looking for a final triumph as well as wants to fully savor this pursuit. The brother’s journey and deputy’s pursuit takes us from one economically battered town to another. The sun-bleached, grimy, fading landscape of the region becomes a principal character as the people living here appear to have been caught in the past and punished by the present. The socioeconomic layers deepen when we learn about the reason (a little ironical one) behind Toby’s bank robbery plan. 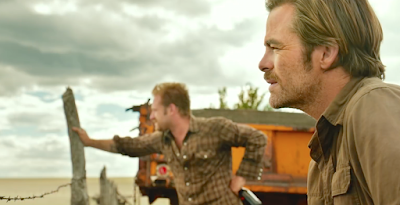 Scottish film-maker David MacKenzie has made a name for himself in the festival circuit with his sexually charged dramas “Young Adam” & “Perfect Sense” and brutal prison-survival movie “Starred Up”. The mix of humor and tragedy we usually find in his films are perfectly mixed to Sheridan’s material. He brings the sense of experiencing everything from a close range, similar to the gritty staging in “Starred Up”. The praiseworthy quality of his direction is the smooth flow as the narrative transitions between genres. The breakneck actions sequences are as elegantly staged as the casual detours into the dilapidated towns. In terms of genre, MacKenzie wades through heist thriller, Western and road movie without ever getting mired by generic elements. There’s a deeply contemplative political layer beneath the narrative surface, which is keyed in a subtle, non-judgmental way. The humongous debt-relief billboards, junkyards, abandoned strip malls & houses, the oil drilling rigs, and the shiny new buildings of the banks convey lot about the places which were left out during their government’s mad dash for flabby economic growth.  There are only a handful of American movies (made recently) which dealt with the nation’s mortgage collapse and economic fallout. Ramin Bahrani’s “99 Homes” brought up the injustice of foreclosed homes, although its volatile theme fizzled out a bit towards the end. Films like “Money Monster” were not more than an entertaining tale about a man who got cheated by untouchable white-collar criminal. Mackenzie and Sheridan make the economic, political critique in “Hell or High Water” well-defined, steering clear of the temptation to be didactic. Apart from the tense, excellently performed verbal showdown in the final scene, the unique political theme runs in the background.


Sheridan’s script was much nuanced in the way he depicts the environment. As he did in “Sicario”, Sheridan is able to diffuse tension through the script with sparse use of dialogues. He was worked with MacKenzie to flawlessly create a place that’s juxtaposed with old and new or past and present. In one scene, you see a cow poke unhitching his horse in a gas station, while nearby atrocious lime-green car rolls into view. In another scene, you see a cowboy lamenting about their dying way of life. Sheridan keeps on adding these fine textures to the narrative which makes the film more than a Southern tale of desperate robbers. Both MacKenzie and Sheridan also give fascinating nods to the works of Coen Brothers and Cormac McCarthy. The funny scene of a waitress asking "What aren’t you having?” and the specific brand of camaraderie between Marcus and half-Indian, half-Mexican Alberto reminds us of elements often addressed by those masters. The desire to feel a sense of dignity and purpose in life plus the need to sacrifice for family is one of the recurring strands in the Coens’ brand of cinema. In “Hell or High Water”, both Marcus and Toby’s journey are founded on that need to fulfill the sense of purpose. The elegiac last trip of Marcus as lawman and his partner’s bittersweet statement, “I don’t know how you’re going to survive without someone to outsmart”, echoes the less-exhausted trip taking by Tommy Lee Jones’ character in “No Country for Old Men”. But, such subtle reminders aside, the idiosyncratic treatment of the material and the seamless mood swings makes “Hell or High Water” very much its own movie.

It is very good to see a block-buster actor like Chris Pine opting to do low-key role of Toby. His conversation with the teenage son as Toby recede into a darker territory was beautifully enacted. Ben Foster plays the typical live wire character (he plays since the re-make of “3 10 to Yuma”), but the craziness factor are bit dialed down. Jeff Bridges is the perfect choice for Marcus. He has been playing Southern characters right from Bogdanovich’s “The Last Picture Show” (1971), Huston’s under-rated “Fat City” to Scott Cooper’s “Crazy Heart” (2009) He gracefully brings in the elegiac note that’s spread throughout the land and personal self.  The self-reliant, gun-toting nature or the eagerness to give into vigilantism (even a passerby offers to string up the perpetrators) by the American Southwest people, seen in the film depicts the common attributes of populace in the region. But they aren’t reduced into a caricature as most of mainstream American films do. The existential anxiety, sense of emptiness these people confronting for decades in these gray, urban landscapes is flawlessly dwelt upon. If traditional heist movies decide to end up on non-violent note, we would see the thieving protagonist riding into the sunset. In this film that particular aspect is reversed. The lawman rides into the sunset and the following panoramic shot ends up hitched on to the ground before fading to black. It feels less cathartic and more tragic.

“Hell or High Water” (103 minutes) transforms the genre conventions of an oft-repeated brand of American tale to provide profound insights about the country’s less-talked socioeconomic factors. It is strongly grounded in a time and place without losing its sense of humanity, unlike Hollywood’s tasteless, ‘event cinema’.

Cowboys, ranches, sheriffs...the typical and quintessential American movie that I have grown up watching brought alive through this movie's review so very beautifully.