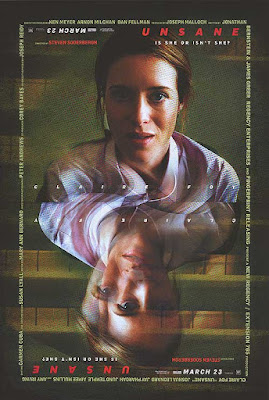 The conceit of Steven Sodebergh’s new movie Unsane (2018) offers a thrilling premise: ‘The Queen’ fame Claire Foy plays Sawyer Valentini, a brash and quick-witted girl who mistakenly commits herself to a mental hospital. The asylum, as we know, is a perfect location for scary flicks. But Unsane, shot using an iPhone 7, doesn’t detail the authentic peculiarities of this strange new world like ‘Shutter Island’ (and its mimicking companion works like ‘Stoneheart Asylum’ or ‘A Cure for Wellness’). It’s uncompromising and harsh compositions more or less gives the feel of ultra low-budget experimental film, which Sodebergh himself has previously made in his diverse career (‘Full Frontal’ & ‘Bubble’). On one hand, the film is a warped, expectedly exaggerated fable on the dark facets of private health insurance, and on the other hand it’s a distressing tale of toxic masculinity that nearly pushes a smart woman into the abyss of mental breakdown. Of course, Unsane also possesses the exploitative ingredients of B-movie horror, intensifying or ratcheting up the tension to absurd proportions. Overall, it’s a grimly fascinating psychological thriller from one of the relentlessly creative American film-maker working today.

Unsane’s derivative story owes a lot to Samuel Fuller’s edgy drama ‘Shock Corridor’ (1963) and Roman Polanski’s wicked tale of female sexual paranoia ‘Repulsion’ (1965). It opens with a warm voice-over set against eerie woods draped in icy blue color: “I always liked you in blue. You wore blue the first time I saw you.” From this seemingly tender confession, it cuts to show our super-sharp, distinctly named protagonist, Sawyer Valentini. She works as a data analyst in a bank. From her lunchtime video call with mother (Amy Irving), we learn that she has freshly relocated to Pennsylvania from her home in Boston. Sawyer is very good at her job, but is bewildered by the boss’s offer to fly to a banking conference in New Orleans and room with him for two nights. Later in the evening, she rushes into a Tinder date or one-night stand, but suffers from a minor panic attack. Before we adjudicate what’s exactly wrong with her, we see Sawyer having a casual talk with a faux-empathetic counselor of ‘Highland Creek Behavioral Center’. 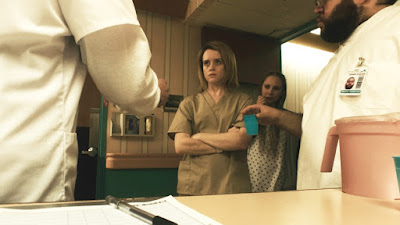 During the chat, Sawyer fleetingly admits to suicidal thoughts. Then she signs a document, adorned with long set of incomprehensible things, without actually reading it. Sawyer thinks that she’s enrolled into periodical therapy sessions. But the suicide talk raises a red flag and the hospital commits her for 24 hours observation to ensure that she will not harm herself. Of course, it’s immediately mentioned that Sawyer has voluntarily committed herself by signing the documents. As expected, she doesn’t react to this very well. Sawyer’s hysterics only increases when she sees a bearded orderly (Joshua Leonard). She’s been seeing this man everywhere, ever since he obsessively started to stalk her. He was the reason why Sawyer remains restless and moved away from home (without even confiding to her mother). After considering Sawyer’s tempestuous reaction, her day-long stay is now extended to a week.

What’s more alarming is that she hasn’t conjured the image of her stalker in the form of hallucination. The man is very much real; he works as an orderly. Sawyer knows him as David Strine, but the name tag actually says, George Shaw. A fellow friendly inmate Nate (Jay Pharaoh) tells Sawyer about places like Highland Creek, where it lures people to voluntarily commit themselves, up until their insurance runs out (most likely in a week). He advises to keep her head down and try to get through the week. Something that becomes hard as David Strine thrusts his sinister plans to covet Sawyer. Meanwhile, Sawyer discreetly calls her mother for help. She flies to Boston and promises to bring hell upon the institution, but soon gets stuck in the bureaucratic and legal muck. With pulpy pleasures abound, things only gets exponentially worse for Sawyer Valentini. 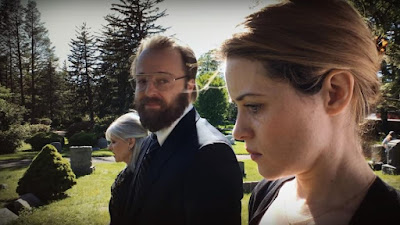 The initial ambiguity surrounding Sawyer’s disquietude and Steven Soderbergh’s iPhone shooting lays fine foundation to this claustrophobic genre piece. The camera’s dead-on shots, as if looking through fish eye lens, makes figures imposing and menacing in myriad ways. It brings a sense of immediacy to engage us with Sawyer’s predicament. Most particularly, the technique works in highly compact environments, incorporating additional level of dread and tense dynamics to the proceedings. Soderbergh also makes good use of the ominous hospital ambiance to instill the creepy sense (Soderbergh shot and edited the movie under pseudonyms Peter Andrews and Mary Ann Bernard respectively). From a dramatic standpoint, much of the narrative developments might seem illogical or silly. But it’s so lean and pulpy that I didn’t mind its shortcomings. Claire Foy’s splendid central performance is a vital reason to watch it. Her bristling and unsentimental presence escalates the film’s horror quotient (Foy’s abrasive on-screen attitude makes her the perfect choice for Lisbeth Salander in Fede Alvarez’s upcoming adaptation of ‘The Girl in the Spider’s Web’).

There’s always this tendency to exaggerate B-horror flicks’ social commentary. Unsane (98 minutes) could be deemed as a profound look at sexual harassment or post-Weinstein era toxic masculinity. But such remarks would be an overstatement, since Soderbergh primary intention is to make an entertaining psychological thriller while pushing the limited boundaries of the chosen technical medium. The director succeeds on that front. Hence, acknowledging the work for (non-existent) thematic profundity would only seem far-fetched.