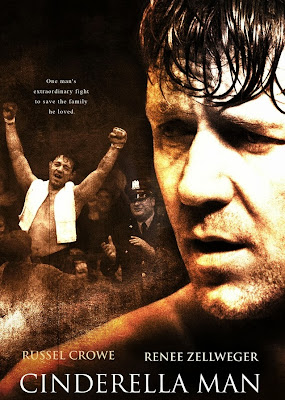 Boxing lends itself to depict characters that get pummeled on their way to glory. The gruesome sport played with arduous intensity gives spectacularly touching true stories. “Fat City”, “Rocky”, Raging Bull” and “Million Dollar Baby” were more than a boxing movie. It used the musty dressing room and confined ring to ponder grander themes. In the same way, Ron Howard’s “Cinderella Man” (2005) takes us to the gritty and harsh period of ‘Great Depression’, in which the great human interest is James J. Braddock -- the lovable, underdog heavyweight boxer. The true story of Braddock is not your usual inspirational saga. It chronicles a life of poverty, disappointment, and embarrassment, where the individual’s triumph remains as a perfect metaphor for America's down-but-not-out spirit of the ‘Great Depression.’

Jim J. Braddock (Russell Crowe) is a tender-hearted guy with a lopsided grin. When we meet him in the movie (in 1928) he is a light heavyweight boxer with a nickname "Bulldog of Bergen." He is happily married to a clever and faithful wife Mae (Renee Zellweger), who can't stand watching him fight. However, she can’t stop him since the boxing money puts food on the table for their three children. Braddock’s middle-class life in New Jersey basks with optimism. To everyone’s surprise he soon loses a fight and starts a downward slide in his career and life. Four years later, Braddock’s family is at the bottom of the depression and lives in a shack, shaking from the cold New Jersey winter. 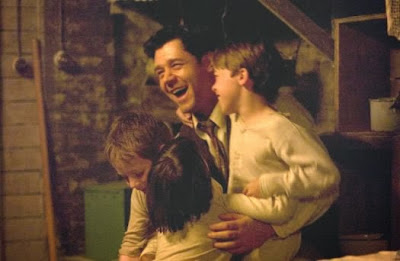 Braddock has lost a lot of money in 1929 stock market crash. Soon, He has suffered a hand injury and has lost his momentum and confidence. Now, he is working a laborer in the docks and his heavyweight boxing career is almost over. But, with the arrival of former manager Joe Gould (Paul Giamatti), Braddock gets a shot at redemption. He offers $250 for a publicity bout with a fighter, who is in the line for heavyweight championship. If Braddock erroneously wins the bout, he needs to face world champ Max Baer (Craig Bierko), whose vicious attacks has killed two men in the ring. You can easily predict what might happen, but how it happens is what makes “Cinderella Man”, an incredibly stirring movie experience.

The script, written by Howard, Akiva Goldsman and Cliff Hollingsworth, faces the problems of standard-issue plot and timeworn dialogues, but balances the boxing sequences and Braddock’s struggle without hammering either of their relevance. This same writing team brought the script for Oscar winning “A Beautiful Mind.” Although that movie was ingeniously structured and extraordinarily acted, the script distorted the facts of their subject's life (John Nash). However, in “Cinderella Man”, the writers have most often stayed true to the facts. The real Braddock was said to be ashamed of accepting charity. This fact is used to show the humiliation, he faced in the depression era: When Braddock, gets in line for government relief (to provide food for his kids), a woman at the window says, in a sickened tone, "I never thought I'd see you here, Jim."

The faults in the script are mastered over by Ron Howard’s rock-solid craftsmanship. The scariness of 1930’s -- America's darkest hour – is sumptuously detailed and re-created. The smoke-filled, claustrophobically crowded streets shows the intensity of those hard times. The boxing sequences make us enjoy, like a spectator in the ring and also quickly takes the POV to showcase the quick-cut brutality of the sport.  Even if you know the outcome of the fights, the cunning shifts of POV make it devastating to see Crowe reeling in pain. The shadowy, deep-toned palette of DP Salvatore Totino presents an unusually vivid and gut-wrenching portrait of a bygone era.

What keeps the film from becoming too sentimental is Crowe's down-to-earth performance. He has transformed himself into a boxer, which is evident in the way he shows his muscular sensitivity. His eyes exhibit the prideful inner character and the family’s desperate need. When Crowe -- as Jim -- kneels down to his son and promises him that he will never send him away in these troubled times, you can feel that, this is not an actor reciting a dialogue. Mae is a usual less trembling wife, but Zellweger’s sincerity shines through the character. She amply conveys her personal integrity. Paul Giamatti, the venerable supporting actor, delivers a stellar performance by remaining as the voice-of-reason and booster. Bierko’s Max Baer comes out as a Hollywood sneering machine by delivering low blows to Mae that if Braddock dies, she can always visit him. However, the real Baer is known for his conflicted character, who remained clownish, only inside the ring. 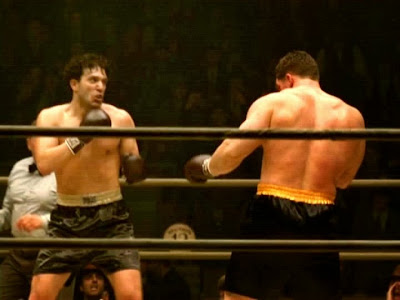 Ron Howard’s “Cinderella Man” gracefully and truthfully handles its subject. It knows when to pull punches and when to wait. Braddock’s second chance should be the brightest beacon of hope for all the downtrodden people.

Its a great movie - must watch !

Well written, Thanks for Sharing

really good collection of movies and actors and actress biography.

Awesome review for an awesome movie! The characters are well explained and compared to their real life images.

It's one awesome movie to come out of Hollywood...

Seen this one and loved it. Enjoyed your post as well.

One of the best and all time hit Hollywood flick...Wonderful stuff in there..You post does absolute justice...

@ Vishal Kataria, Thank you. Yeah, this film doesn't the facts of Jim's life and isn't so sentimental.