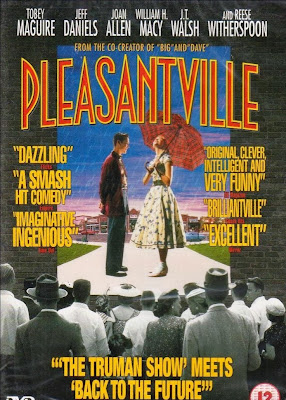 In dictionary, the word ‘Knowledge’ is described as the “psychological result of perception and learning and reasoning.” So, learning something is not always a pleasant thing. It opens one’s eyes to live a better life and at the same time, it takes us to the dark corners of human existence. Knowledge plays a huge part, even in the story of creation of Adam and Eve. This is the main theme in Gary Ross’ clever and satisfying fantasy “Pleasantville” (1998). It mocks the falseness of family values and urges individuals to break through the shields of societal conformity.

Clumsy and shy David (Tobey Maguire) is burdened by the modern life. Watching the reruns of old television show “Pleasantville” is one of his ways to take a break from the problems. David’s twin sister, Jennifer (Reese Witherspoon) is a disreputable and aggressive girl. In this sophisticated 90’s, they live with their mother, who’s never around. One day, a conflict of interest in watching TV shows, ends up in the breakage of TV remote. A mysterious repair man (Don Knotts) visits the house and gives David a ‘special’ remote control. When David, latter settles to watch a 24 hour marathon of his favorite show, a struggle ensues with Jennifer, which this time, sends them to the monochrome and clean town of “Pleasantville” – yes they are inside a 50’s soap opera. 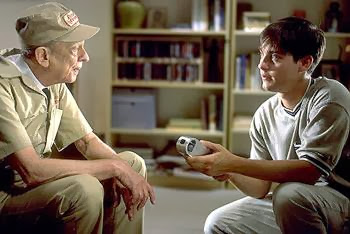 In this poodle skirts and perfectly pressed shirts era, they replace Bud and Mary Sue Parker. Their parents are utterly middle class cardboard characters named George (William H. Macy) and Betty Parker (Joan Allen). In this 50’s television world, the sun’s rays are mild; sex is considered as taboo; there is no profanity; words like “gee-whiz” and “swell” are often uttered in each conversation; there is no rain, storm or fire; basketball team always wins and everyone has the characteristics of an angel. David is thrilled about his new status and newly gained parents. However, Jennifer is horrified by this black and white world. She shouts after contemplating her gray complexion and hates having a perfect dad and mom. Jennifer’s free radical thoughts set about a change in this world. Each member of this community slowly changes from black and white to color. This literal color changing catalyst could be true expression, caring nature, literature, art or sex. 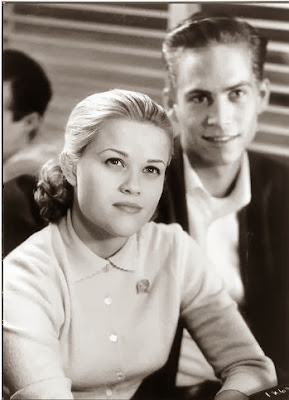 Gary Ross’ script reframes the relationship between colorization and cultural remembrance. Dramatizing the incursions of a color present into a black and white past, Ross creates a narrative based on the cultural apotheosis: “not everything is as simple as black and white.” He uses the 90’s sophisticated digital cinema techniques to bring out a political allegory about the legacy and significance of the 1950’s. “Pleasantville” joins the historical time-traveling tale of “Back to the Future” and the media voyeurism theme inherent in “Truman Show.” By revisiting the 1950’s through the auspices of television media, this film explores and undoes the constrictive limits of the 50’s projected cultural fantasies about sexuality, gender, domesticity and community.

‘Color’ is central to “Pleasantville’s” narrative:  literally as well as allegorically. Black and White indicates the caricatured morality of the 50’s. In films, monochromes are often associated with conventions of sexless, sanitized, nicety. However, when rock ‘n’ roll, non-marital sex, modernist art and rebellious literature comes into existence, color progressively changes the monochrome universe. So, color doesn’t serve only as a demarcating line between past and present, it defines a growing youth and a awakening of community. 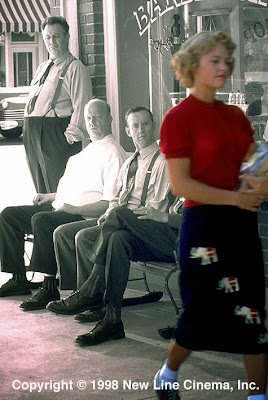 The screenplay turns far more allegorical, when the townsmen protest the complexion change, naming the converted people as ‘coloreds.’ Ross tries to point out the male chauvinism through the ‘Chamber of Commerce’, which consists of all-male members, who are intent on policing in the terms of cultural consensus. The courtroom battles and book burning episodes of “Pleasantville” shows us the burgeoning impact, America experienced in the civil rights protest and feminist era.

Loss of innocence is one of the recurrent themes of Ross (who wrote the script for “Big”, “Dave” and transformed the novel, “Hunger Games”). But, he also did a great job in his directorial debut feature by handling the scenes very well, without mocking traditional values as pointless and repressive. By working with cinematographer John Lindley, he takes full advantage of the visual imagery – the then newly used digital technology helps in every way to say this thoughtful story as well as to engage the viewer. 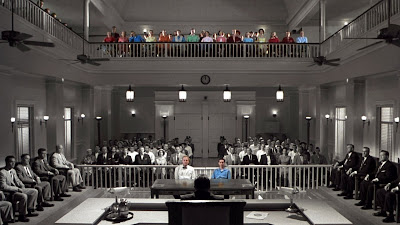 Tobey Maguire’s David is a charming, likable character, whom a viewer can identify himself with. Reese Witherspoon as the 90’s renegade teenager turns in a naughty performance, which satirizes her generation. Jeff Daniels and Joan Allen’s understated performances are splendid. Macy brings out the deadpan comedy as the caricatured father, who's frightened by the gradual transformation of his town.

“Pleasantville” belongs to the category of films, which remains and thought-provoking as well entertaining. The innovative plot and excellent visuals clearly brings home the message that individuals can make a difference (like “It’s a Wonderful Life” or “Wizard of Oz”). It advises us to not be part of a community, which is frightened of change or exhibiting truest emotions.