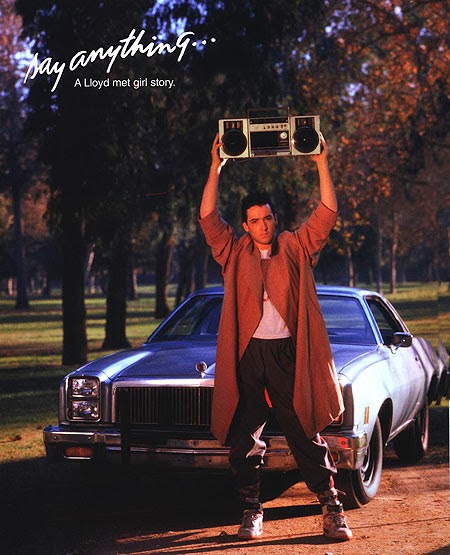 Contemporary teen romance movies are marked by crude jokes, unwarranted nudity, uninvolving sub-plots and cockeyed protagonists. What these movies lack is not the broad strokes of storyline, but a solid emotional investment. A teenage love story can win over viewers only when it has some freshness and when it treats it subject as human beings – a character for which we can root for. Cameron Crowe’s everlastingly optimistic “Say Anything” (1989) captures the nuances of first love with plenty of laughs and a genuine feeling. Yeah, it’s been two and a half decades since its release, but Crowe’s magical work provides insight into an awkward moment in teenagers’ life after high school, at the brink of entering adult world (which will remain relevant forever). The protagonist ‘Lloyd Dobler’ is no more a ‘new age’ romantic, but this guy will surely win you over.

Lloyd Dobler (John Cusack) is an underachieving bright student. He loves loud music and at times lacks self-confidence. He lives with his elder sister (Joan Cusack) and little nephew. Corey (Lily Taylor), the guitar playing teenage girl is Lloyd’s best friend. She is obsessed with her ex-boyfriend, for whom she has written 65 songs. Lloyd’s parents are in West Germany, where the father serves with Army. Father wants him to join in Army; the school counselor wants him to enroll in the local community college, but Lloyd hates this conventional future, whose ambition is to become a professional kick-boxer. At present, he is entranced with an unpopular best student, Diane (Iona Skye). She is a brainiac, who doesn’t have friends or social life and she has also recently won a prestigious fellowship study in England. 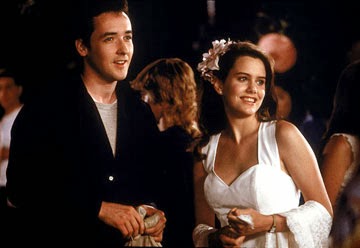 She lives with her divorced father, James (John Mahoney). James runs a nursing home and showers his daughter with gifts and high expectations. Corey declares, "Girls like Diane Court don't go out with guys like you," but she accepts optimist Lloyd’s invitation for the post-graduation party. They both have nothing in common, nonetheless Diane genuinely like Lloyd. He offers emotional support and gives absolute love for Diane, but the arrival of a couple of tax men changes everyone’s life.

Cameron Crowe was well known for penning the script of two famous 80’s teen movies – “Fast Times at Ridgemont” (1982) and “The Wild Life” (1986). As a director, Crowe haven’t made any groundbreaking movies, but he has made good-natured movies, which brings out the positive side of human nature. With the Oscar nominated “Jerry Maguire” and “We Bought a Zoo” he rendered nuggets of insight into the day-to-day life. In “Almost Famous”, he took the drug and sex repleted ‘rock n roll world’ and changed into a terrific bittersweet love story. His scripts are original and full of quotable lines. “Say Anything” has plenty of storming lines: "Don't be a guy. Be a man. The world is full of guys"; "If you start out depressed everything's kind of a pleasant surprise."; "Nobody thinks it will work, do they? NO.
You just described every great success story." Lines like these took Crowe to the next level (before he was considered as off-beat and unmarketable). 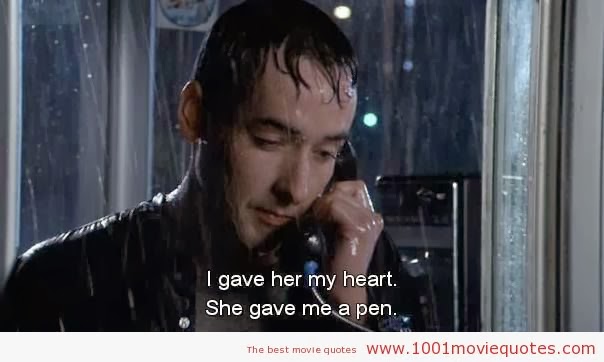 In this film, Crowe has affirmed the richness and depth of the relationships. This being his debut feature, we can see that he is no good with camera or shots, but emotionally he knows precisely how his characters should act and react. The story is a cliche—warm-hearted underachiever winning the beautiful and intelligent girl, but when we see them, flesh and blood, we feel for them. Of course, the whole script would have fallen flat, if not for the right set of actors.  In the 80’s John Cusack was the most sought after actor for teenager roles (“Better Off Dead”, “One Crazy Summer” and “The Sure Thing”). Although, a bit old play a high school graduated boy, Cusack invests great sincerity in the portrayal of Lloyd. His angst is distressingly believable and the humor remains very funny. The awkwardness of first love is the central theme of this film. The theme wouldn’t have been perfectly felt by a viewer, if not for Cusack. Ione Skye was underused by Crowe, but does her part quite well by straying between self-confidence and uncertainty.

Teenage romances are often seen as a fantasy filled with sugar-coated dialogues. Contrary to the belief, “Say Anything” is grounded in reality. This elated, slightly off-beat film makes you realize about some things in life.