The Butler -- A Crash-Course on the US Civil Rights Movement 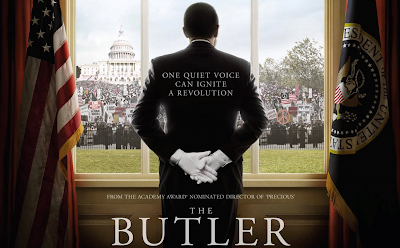 Lee Daniels was known for his non-subtle, straightforward storytelling technique. His previous movies “Precious” and “The Paper Boy” had its share of blunt, clunky moments and few unintended laughs. Once again he aims high with his “The Butler” (2013), to take the viewer through the 20th century domestic racism in America. Of course, that’s not necessarily a bad thing, but in the end the film comes off as a bit over ambitious in trying to encompass a large history within too narrow a framework. However, this is a rare mainstream multigenerational saga set against the backdrop of the civil rights movement and is also rare in a way, where a bunch of white actors act only in the distractive cameos.

“The Butler” is loosely based on the life of a black White House butler named Eugene Allen, who died in 2010. Cecil Gaines (Forest Whitaker) is the fictionalized version of Eugene, who at the start, recalls his childhood in the 1920s Georgia, USA. Field workers in the cotton fields were only technically ‘free’ in those areas. Their white bosses still toil them with low wages and mistreatment. The plantation owner’s psychopathic son rapes Cecil’s mother and later guns down the father. The old matriarch (Vanessa Redgrave) of the house pities Cecil and invites him to work inside the house as domestic servant.  The qualities Cecil gains as a servant helps him to head north and find work as a waiter in a posh Washington, D.C., hotel. As a butler, at an early age, Cecil has learned the importance of silence and serves the customer right. This polished professionalism attracts a White-house staffer. 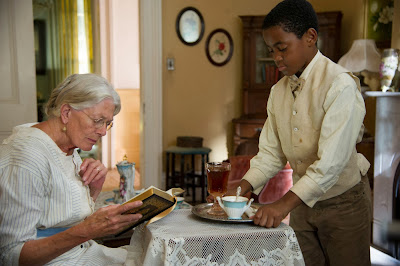 Gaines soon gets a call from White House and earns a slot as the butler. He was also coldly informed by the head butler that “we have no tolerance for politics in the White House.” After joining the staff, Cecil begins to work his way through the ranks and serves eight American presidents from Dwight Eisenhower (Robin Williams) to Ronald Reagan (Alan Rickman). The loyal White House employee’s home life is somehow filled with dissension. Cecil’s prideful wife Gloria (Oprah Winfrey) becomes an alcoholic as she is mostly left to her choices to raise the two sons alone. The elder son Louis (David Oyelowo) is the first one to go to college but later joins radical groups like ‘Black Panthers’ and resents his father’s status as servant in the White establishment.

The script written by Lee Daniels and Danny Strong totally dramatizes Eugene Allen’s personal life, but they have stated (in interviews) that the events and conversations depicted inside the White House have actually happened. Nonetheless, the White House scenes are not as good as the portrayal of relationship between Cecil and Louis. The speed with which the politics unfolds inside White House makes you wish that it could have been great if “Butler” was developed into mini TV series (like “Roots”). Truman, Ford and Carter don’t even get a scene as they are seen only in news footage. The other five presidents are portrayed by well known actors, who kind of become a distraction. The script also isn’t interested in exploring the intricacies of Cecil. The direction is imbued with a desire to deliver Oscar-worthy shots, even though there is no denying that some moments are really heartfelt, honest and moving. 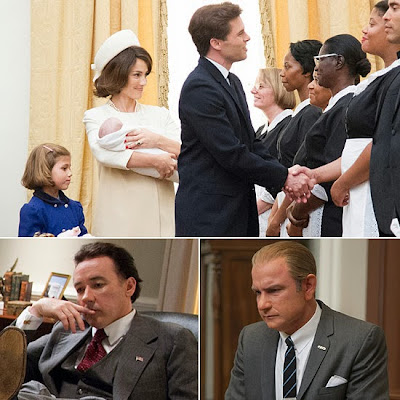 Forest Whitaker gives another dignified performance, who takes the risk of underplaying a main character, which could have easily milked audiences’ tears with a broad-stroked performance. The faces he shows to his employers and family is an effective showcasing of Whitaker’s talents. Oprah Winfrey breaks her image by effectively playing an alcoholic wife. David Oyelow is another scene-stealer, who ages up from 17 to 60, perfectly capturing the anger and idealism of a black youth without making the character, a cliché. Robin Williams, Alan Rickman, Liev Schreiber, James Marsden, John Cusack and Jane Fonda are buried under makeup to play the half-hearted White House scenes.  However, “The Butler” creates a lot of space for talented black actors than what they usually get in Hollywood. Cuba GoodingJr., Terrence Howard and Lenny Kravitz are uniformly excellent. 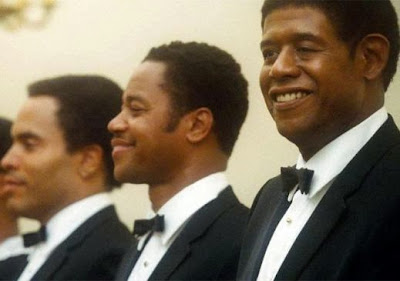 Lee Daniels’ “The Butler” is made for awards and manipulatively tries to create the ‘Big Movie’ feel. Nonetheless, the performance from the main cast keeps the movie grounded and gives it an irrefutable emotional power.

at December 30, 2013
Email ThisBlogThis!Share to TwitterShare to FacebookShare to Pinterest
Labels: Based on True Story, Social Drama