The Attack -- A Piercing Look at a Seemingly Unresolvable Conflict 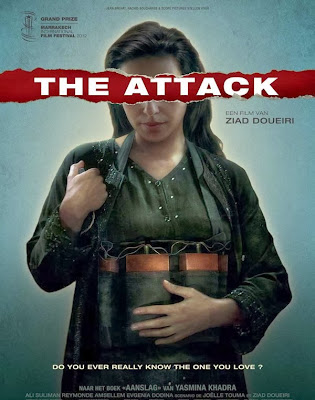 What prods a troubled soul to do murder? That’s the question Lebanese director Ziad Doueiri’s “The Attack” (2012) asks. Of course, there is no definite answer in the end – which is an impossible one, considering the issue here – but takes a viewer one step forward to understand about terrorism, love and trauma. Based on the novel by Yasmina Khadra, this upholding thriller weaves its characters around the Palestine-Israel issue, without considering much about the traditional thrills. “The Attack” was banned in many Arab countries for the director’s decision to film in Israel. In Israel, the movie was accused as an ‘excuse-making’ film, although, it has no single controversial idea and endorses nothing in particular.

Dr. Amin Jaafari (AliSuliman) is an Israeli Arab surgeon. He practices in Tel Aviv. When the movie starts, Amin says goodbyes to his wife, Siham (Reymond Amsellem), who takes a bus for a trip to Nazareth – to visit relatives. They have been married for 15 years. Later, he receives an award – the first Arab to win the prestigious Israeli medical prize.  The next day, Amin and his fellow doctors hears a horrific blast. For the doctors, the chaos after a bomb blast has become routine. News reports that 17 people were dead and dozens of wounded people are treated. Of the 17 dead, 11 were children celebrating a birthday party. Amin wonders “What’s wrong with those bombers?”, while trying to save every victim, even the one who refuses his help.

Siham is not attending the phone. Around 3:00 Am, Amin is called to the hospital and asked to identify a shockingly mutilated body. He, without a shred of doubt, confirms that it is his wife. But, that’s not the worst. Soon, he is ushered to an Israeli intelligence officer, Moshe (Uri Gavriel), who tells that the suicide bomber, in the recent blast, has been identified as his wife. Amin totally denies the accusation, claiming that his wife is a Christian and that he would have known some hint about a thing like this. No one believes Amin, who is taken into the custody. After undergoing sleep deprivation and days of abusive interrogation, he is released. The investigators have absolved his guiltiness from his wife’s evil act. Amin resents most of his Jewish colleagues, whom accept Siham’s guilt without any questions. How could the woman he loved be capable of doing such a ruthless act? Questions like this haunt him, which forces him to take a journey into Palestine, to retrace his wife’s last few days. 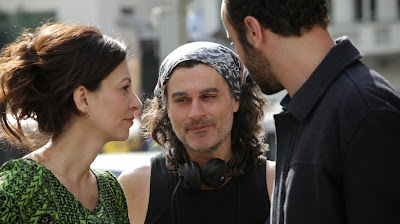 The script, written by Doueiri and Joelle Touma, (based on the bestselling novel) attacks all the beliefs of the protagonist. He believes his wife, who is taking a short trip to the territories to visit family. In the award ceremony, about his current status in Israel, Amin says, "I'm looking forward to the next 20 years." All these placid beliefs were shattered within a day, with a single event. After the blast, along with Amin, viewers are also stranded in the middle. We want to know the truth behind Siham’s involvement, which becomes more hard and complex throughout the journey. But, unlike a viewer, Amin can’t easily categorize the reality, because the more he talks to his family & townspeople, the more he immerses himself again in the world of his childhood. The detective story elements, the script employs are only part of the story.

In an interview, Doueiri said, “I’ve somehow committed a breach by showing the Israelis in a sympathetic way. They (Arab states) think that by being neutral you are actually showing an Israeli point of view.” Doueiri, himself comes from a conflicted background, who says that he grew up hating Jews and Israel. But, “The Attack” has the even handed approach, through Doueiri showcases variety of perspectives. The pain is felt by every character in this film and never the volatile situation in black and white. Doueiri isn’t interested in providing a neat solution. He rather ponders over the demarcation line, which separates the people into two different entities. Reymond Amsalem, who plays the part of Siham is a Jewish actress who studied Arabic for the part (since no Palestinian actors were willing to be a part of this movie). Her character is both poignant and intriguing. Ali Suliman makes us empathize with Amin, who, like many Arabs, lives in a twilight zone, considered as an outsider and traitor in both worlds. 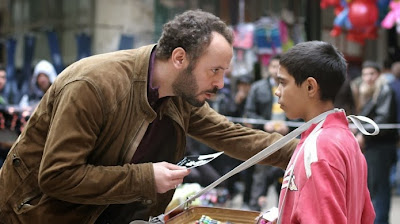 “The Attack” is a psychological journey into the unknowability of human nature. It never panders the world's most intractable conflict with simple and tidy resolutions.

Rated R for some violent images, language, and brief sexuality.

Thank you for this post - looks like an intense movie indeed. If I get a chance, will definitely watch.