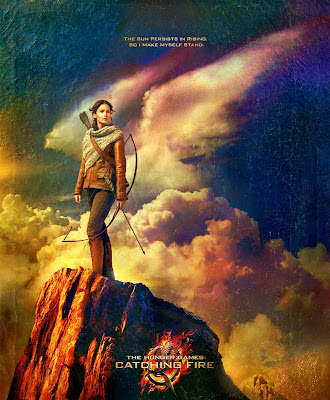 Francis Lawrence, who took over the reins from Gary Ross, elevates the “Hunger Games” series and ditches the child-driven gladiatorial combat to approach wider themes of media distraction, political oppression and the incarceration of a celebrity. Based on the best selling ‘Young Adult’ novel “Hunger Games: Catching Fire” (by Suzanne Collins), this movie doesn’t settle for copy-paste mode of transforming novel onto film. It explores its characters rather than being a mirror reflection of what is portrayed in the book. The new vision and array of characters makes this sequel a great journey into the dystopian futuristic country of Panem, where the 1 percent people live in luxury while the 99 percent brood in the barren districts.

It’s not easy to catch up with this sequel, if you haven’t read the books or haven’t seen the first movie. “Catching Fire” doesn’t have a deadening prologue of saying what happened. It begins with Katniss (Jennifer Lawrence) and her faux lover Peeta (Josh Hutcherson) taking a tour through the 12 districts of Panem, celebrating their Hunger Games victory (at the expense of 22 dead adolescents). Katniss suffers from post-traumatic shock, which is evident in the opening scene, when she is hunting a turkey. President Snow (Donald Sutherland) threatens the lives of her family and friends, provided she keeps up her cherished false love-affair for the media. The pair has only one choice: to be stooges for the evil regime. Katniss reluctantly obeys the president when he throws in the possibility of annihilating her entire district. 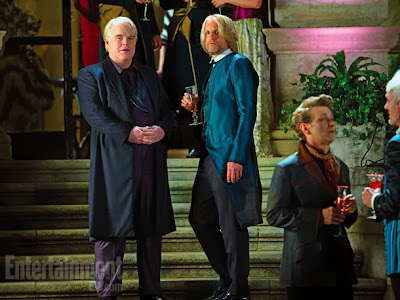 Meanwhile, the fervent spirit of rebellion brandishes throughout all districts. Katniss’ way of circumventing the rules remains an inspiration for these oppressed people. Snow wants to kill her but the new mastermind named ‘Heavensbee’ (Philip Seymour Hoffman) proposes a sinister plan. He makes Snow to concoct a special edition of ‘Hunger Games’ (reminding the anniversary of the regime), which will include only the past winners. Now the pair is compelled to rejoin the jungle fight, which has become more lethal.

There are certain problems in filming a middle book of a franchise. The story will have a great range, the stakes will be high, but at the same time, it can only remain as a path that doesn’t have much of an end. However the script from Simon Beaufoy (“Slumdog Millionaire”) and Michael Arndt (“Little Miss Sunshine”) makes it more entertaining than the predecessor, while giving an elaborate social science lesson on the affairs of a totalitarian state. If you feel that there are some silly plot points, the mistake might reside only in the book. The love triangle, involving Peeta, Gale (LiamHemsworth) and Katniss seemed like a plot contrivance in the first part. But in the sequel, it comes off as more complicated and genuine one, than the silly romantic exercises in “Twilight.” Young Adult novels always has bright and beautiful woman, who relishes in keeping more than one guy at line. But, “Catching Fire” exhibits the vexations behind that plot devise. 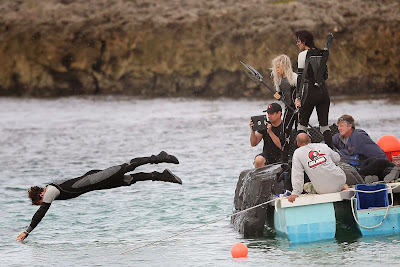 The script also illustrates the government’s manipulation of media, which in turn results in distracting the people from more pressing problems. Stanley Tucci’s ludicrously wigged game-show host depicts a craven media that uses all its flashy insincerity in the service of those in power. Director Francis Lawrence (“I am Legend”, “Constantine”) extracts excellent performances and takes great efforts to make us feel the entrapment and terror of this awful future world. The action sequences are far more superior and naturalistic than the first installment. If Katniss is played by anyone other than Jennifer Lawrence, the character would be filled with a false sense of modesty and sanctimony. Most of today’s movie heroines are intent on jabbering, but Lawrence observes a lot, conveys the pain and disgust through her eyes and dynamically reacts when the situation demands her valor. To state it simply, she flourishes the character in various ways than what the material demands.

Considering the remarkable career of Donald Sutherland and his flair of intimidating roles, portraying Snow must have been a cakewalk. Hoffman’s ‘Heavensbee’ is a strong addition to the franchise. He brings an elusive calmness and menace at the same time.  The supporting characters are filled by resourceful actors: Elizabeth Banks (as garish Effie) and Woody Harrelson (as Haymitch) reprise their previous roles, while the new additions are Sam Clafin as enigmatic Finnck, Jena Malone as prickly Johanna, Jeffrey Wright and Amanda Plummer as an egghead pair. 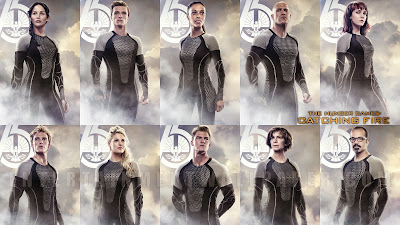 The movie ends on a cliffhanger note, which shouldn’t surprise anyone, since two movies are being made from the third (“The Mockinjay”) book. “The Hunger Games: Catching Fire” (2013) is not the best movie about dystopian society, but it is very entertaining and retains the hunger in a viewer to find out what happens next.


Rated PG-13 for intense sequences of violence and action, thematic elements, a suggestive situation and language.

at December 10, 2013
Email ThisBlogThis!Share to TwitterShare to FacebookShare to Pinterest
Labels: Hollywood Movies

Excellent review... I was in 2 minds whether to see the movie because the ending of part 1 was a damp squib. But this review convinces readers otherwise!

I absolutely LOVE Katniss! I read this series after watching the first movie and it was amazing. Saw the movie as well, and found it a decent adaptation.
A lovely review though! Nicely done

@ Vishal Kataria, Thanks for the comment. I also hated the climax of first part and somehow an intensity was missing in that movie. The second part is lot better.

Now I will watch this movie coming weekend