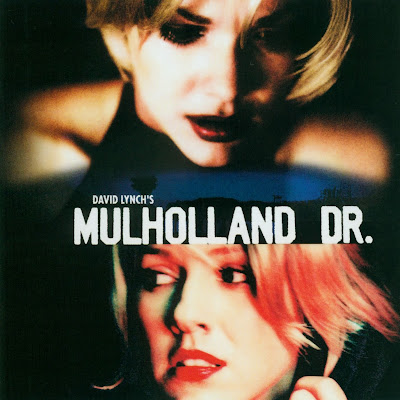 Few years back, when I watched David Lynch’s “Lost Highway” and “Mulholland Drive”, I thought, ‘This movie doesn’t make any sense.’ I always like to watch movies that defy the rules of a traditional narrative, but I was at a loss of words to express my feeling about these movies. David Lynch always intrigues us with a unique plot, then frustrates a viewer, because no could grasp what’s going on. Later, disturbs us with his surrealistic twisted vision and if you could survive all these and embrace his dreamy logic, then you will be amused and thoroughly rewarded for the patience. Cronenberg, Kubrick and Lynch belong to the elite list of film-makers, who are confident enough to bring the patterns of abstract and experimental filmmaking to a broader audience. Lynch’s “Eraserhead”, “Blue Velvet” and TV show “Twin Peaks” are the works of a wholly original film-maker. They contain fresh visual and thematic elements, which are hard to grasp in one sitting. His 2001 frenzied masterpiece “Mulholland Drive” is the most painstakingly difficult work to decipher (to say the truth, I interpreted some visual elements through the help of sites like IMDb).

After watching “Mulholland Drive” (when I didn’t know about Lynch’s works) for the first time, I deemed that the film-maker had no idea how to finish the movie. Now, the subsequent viewings of the movie had helped me to forge a thought in my mind: that it is deplorable to critically judge some mind-bending movies based upon single viewing. This film was initially planned as an open-ended television pilot. In 1999, some scenes were shot, only to be shelved by the TV network. Later (with the help of Studio Canal +), Lynch re-visualized the project to transform it into a feature film, which resists narrative logic and remains free-floating. 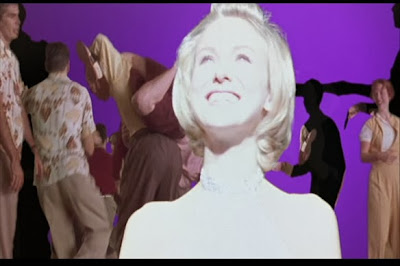 The movie commences with a flashy jitterbug contest, and then a head falls into a pillow. In the next frame, we are introduced to a woman (Laura Elena Harring), who says, “What are you doing, we don't stop here” to her limousine driver as it winds down ‘Mulholland Drive.’ The chauffeur and his companion threaten her with a gun, who are immediately squashed by a group of high-speeding young alcoholics. Rita escapes the accident with a head injury. She stands above the sleepless Los Angeles city and stumbles into the boulevards, full of broken dreams. She sneaks into the house of an old lady, who is departing in a car to the airport.

Meanwhile, a stereotypical blonde-haired cheery girl, Betty (Naomi Watts) arrives from Canada. She seems to be one of the countless girls who arrive at Hollywood hoping to become a star. She bids farewell to an elderly couple and takes a taxi to stay in her aunt’s house. Her aunt is out of town and has arranged an audition for Betty the next day. Coincidentally, it was the same house, where the injured woman is hiding. At first Betty thinks the woman is a friend of her aunt and asks her name. The woman gives a confused look and takes the name “Rita” (from the movie poster of “Gilda” starring Rita Hayworth). When Betty comes to know the truth about Rita, she befriends her and searches her belongings, only to find a bag full of money and a significant blue key. The perky blonde girl seems enthusiastic to solve the enigmatic identity of Rita (“It'll be just like in the movies. We'll pretend to be someone else" says Betty). 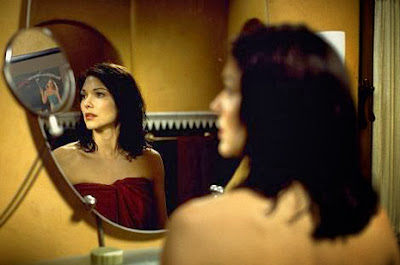 In the second narrative, we see a hotshot young director Adam Kesher (Justin Theroux) being commanded by his financiers, the menacing Castigliani brothers, that he must use an actress named Camilla Rhodes (MelissaGeorge) in his new film. He goes home frustrated to find his wife having an affair with a pool man and gets thrown out. The lucrative financiers’ men are making his life a living hell. In the third narrative, a hit man guns down his friend in an apartment and kills two others, who witnesses the murder. Earlier, we also hear a luncheon’s nightmare as he recounts it vividly to his male buddy in a diner called ‘Winkie’s.’ When the luncheon sees a burnt-looking bum or “monster” in the alley behind the diner, like in the dream, he dies out of fear. Witnessing these warped introductions of these characters will make you squirm in your seats, looking for some explanation. Don’t worry there is a reason for all these narrative, but grasping it, is solely based upon your patience and attentiveness. 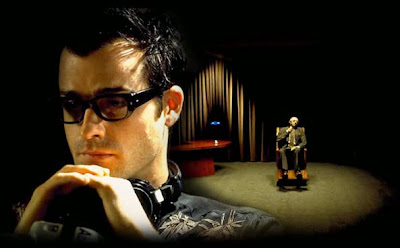 “Mulholland Drive” runs for 145 minutes and for the two-thirds of that time, it moves smoothly, although questions pop up at each intersection. But, in the last act, the ride takes the form of a roller-coaster, raising red flags on your mind and makes you wait for the defining moment, only to find that there is nothing. Ascertaining what happened can make you love or hate Lynch, but what the director subtly establishes through his vision is the corrupted, twisted nature of Hollywood. Through the surrealistic settings, he vibrates the past and present culture of Hollywood. The presence of authoritarian film moguls and graffiti-spattered restaurants eviscerates our impression of this idyllic dreamy place. Film-makers like Samuel Fuller, Raymond Chandler and Polanski have of course established Hollywood as ‘capital of corrupt’, but Lynch’s vision is a notch above because he embraces the notion through an irrational storytelling method, which again remains contrary to the Hollywood tradition.

************ Spoilers Ahead*****************
Those who like to experience this movie are advised strictly, not to read the following two paragraphs. The initial two frames give us a great clue. From the camera’s viewpoint, we see a head falling into a red pillow. In the later part of story, when Naomi Watts wakes (in reality) as Diane Selwyn, we can see her waking up from the same colored pillow. So, naturally a viewer can assume that what happened before was a dream, which is why many strands of narrative never made sense. Diane is a struggling actress, who was under the shade and ‘love’ of successful actress Camila (in reality played by Elena Harring). Camilla falls in love with the hotshot director (Adam Kesher). Camilla goes out of reach from Diane, so, in the dream sequences of Diane, we see Rita (Camilla’s alternate personality) clinging hard to Betty (Diane’s alternate personality). Also, in the dream, the director gets thrown out by her wife’s lover and is chased by menacing guys. In reality, the director was separated without the problem of alimony (“She gets the pool man and I got the pool”) and there are no shady financiers, compelling to cast an actress. In the dream, the car stops and Rita is threatened with a gun. In reality, Diane travels in a limo to a dinner, which changes the fate. In the dinner scene, Diane recounts how she came to Hollywood: “I won this jitterbug contest. That sort of lead to acting.” In the first frame, we see a jitterbug contest, whose occurrence in the initial frames is explained through this line. Diane later contacts a hit man in the “Winkie’s” diner to kill Camilla. The hit man succeeds (although we don’t see him do it) and he becomes the hit man in dream too. 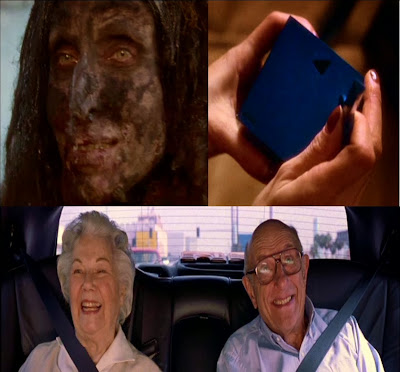 The elderly couples who accompany Betty, in dream, represent the innocence of Diane Selwyn. The deformed bum or monster behind the alley is the exposed inner guilt of Diane. When Diane wakes up from the dream, her neighbor says that two detectives asked about her, which sort of confirms her act of killing. The blue box holds all the inner secrets of Diane. When her dream takes a weird turn in the ‘Club Silencio’ (Betty convolutes in her seat), the box is opened, notifying her that she should wake up from her sleep (“Hey pretty girl! Time to wake up.”) At last, when the guilt crushes upon her heart (the rage also transforms into auto-erotic pleasure), we see all the purity and innocence (in the form of elderly couples) confronting her, which results in the suicide. The sequences of all these events are thrown by Lynch like pieces of a puzzle. This is not the definite explanation and I myself didn’t find answers for many of the questions. There may not be any specific answers at all as Lynch rejected notion of truly resolving any of it. 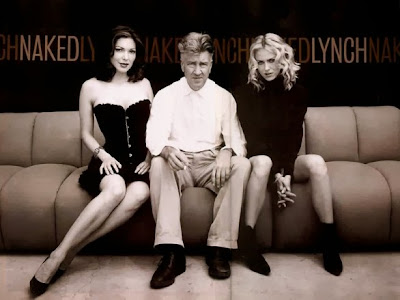 David Lynch introduces dozens of talented actors into the narrative, but establishes none, except for the lead pair. Actors like Robert Forster and Dan Hedaya play the characters, which were obviously designed to establish the beginnings of multiple narratives that would play out over weeks of TV episodes. Naomi Watts’s character was initially one-dimensional but as a genuinely over-protective friend, she exhibits surprising intimacy and depth. Elena Harring holds the screen, although her role doesn’t have the scope Watts has. Justin Thereoux character could have showcased many Hollywood horror stories, but suffers a bit because of the truncated storyline.

Director Lynch’s usual bizarre sense of humor could be found in couple of scenes: when Adam has a late-night meeting with the ‘Cowboy’ (Monty Montgomery); Betty auditioning for a role with a lecherous elderly actor (Chad Everett) and it turns into a highly charged sexual performance. The sexual intensity in Lynch’s movies (he is often labeled as ‘misogynist’) often leads to deepest perversions, but in this movie, the romantic involvement between Rita and Betty is played out without any one of those aberrant practices. The masturbation scene in the end is another matter. It is conceived not only to give a heightened sense of tension and discomfit, but also conveys the somber feelings of the character that results in her pathetic end. 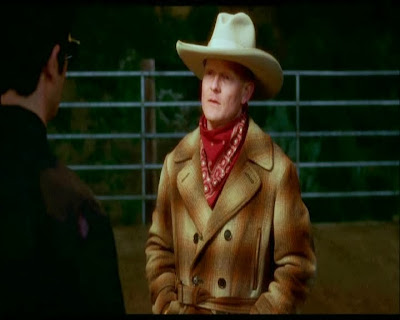 “Mulholland Drive” is the work of a master-surrealist. It deeply contemplates the allure of Hollywood and depicts the women of this tinsel town as so desperate for success, that they slowly become unrecognizable from each other and themselves. It ranks alongside the auteur fantasies like “81/2” and “Persona.” In short, “Mulholland Drive” is a movie for those who can confront rapidly burning questions, not for the seekers of cordial answers.