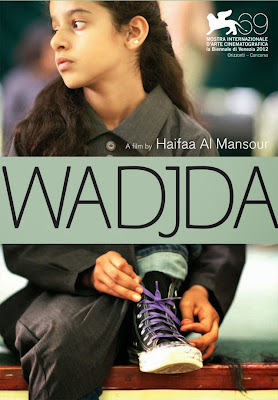 Haifaa Al Mansour’s movie about an innocent, subversive girl, “Wadjda” has quote a few surprising notes attached to it. It was the first Saudi Arabian feature film to be directed by a woman and the first movie to be entirely shot within the oil kingdom. As you can see in the end credits, the shooting of this movie were helped by powerful supporters Prince Al-Waleed Bin Tal and backed up by various global movie enterprises like “Sundance Film Institute” and “Abu Dhabi Film Commission.” Screening the cinema had its own hardships, since there are multiplexes or theatres in Saudi Arabia. However, it was played in the neighboring country UAE, which has a slightly more relaxed view of women. As a viewer, there is no need for you to worry, because these prominent talking points -- behind the making of “Wadjda” (2013) -- only transcends our viewing experience rather than forcing us to like it.

‘A kid on a bicycle’ – In movies, I think this phrase represents innocence and a forward motion point, i.e. from childhood to adulthood. From Vittoria de Sica’s “Bicycle Thieves” (1948) to the recent French fable “Kid with a Bike” (2011), the quest for a bicycle always takes us through the constraints of a society. A girl’s simple desire to ride a bicycle makes us glimpse into the everyday reality of woman in Saudi Arabia. “Wadjda” nicely blends in the new wave Iranian film-making style (“The White Balloon”, “Children of Heaven”) with the Western art house style and the result is an affecting drama that will set the cinephiles’ pulses racing. 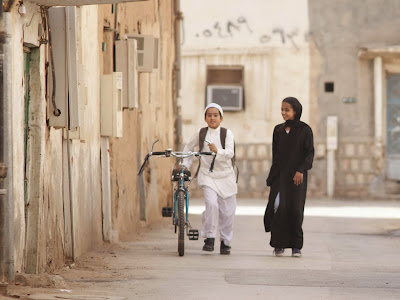 The film starts in a girl’s school in contemporary Saudi Arabia. The 11 year old girls are mumbling the morning recitation of Quran. The camera shows us a row of dull flat-heeled black shoes. But, one shoe among the lot is basketball high-tops. It belongs to “Wadjda” (Waad Mohammad), a rebellious and independent young girl. She lives in a middle-class suburb in Riyadh with her parents. Her mom (Reem Abdullah) admires western dress in private and is always in a state of fear that her in-laws would marry off the good-looking husband (Sultan Al Assaf) again, since she hasn’t produced a son. The bright-eyed Wadjda has difficulty in contemplating the challenging social norms. She likes to listen to pop music, hates to wear head scarves in public and hangs out with a boy named Abdullah (Al Gohani).

One day, she challenges Abdullah that she will buy a bicycle so that they can race together to assert who is the best. Abdullah, at first, laughs at her, since girls aren’t allowed to ride bikes in Saudi Arabia. Apart from stopping the freedom of movement, it is feared that bicycle riding would compromise a young girls’ key to a happier future -- her virginity. After school, Wadjda sees a new green bike at the local toy store. The owner says it is 800 Rials. From the next day onwards, she hatches up plans to raise the money. She sells bracelets of football clubs, run errands for the elder girls, which brings her under the eye of stern headmistress, Hussa (Ahd). Wadjda’s lack of enthusiasm for Koran recitation, changes, when she hears about a Quran-reciting contest at school with a cash prize. 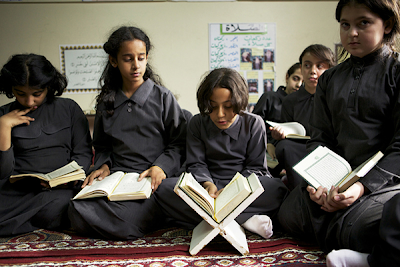 The 12 year old thesp, Waad Mohammad plays her role with a tangible confidence. If you take out the girl’s charisma out of this movie, the subject will become too grim to bear. When she is set loose – on road --, in the final sequence, you could feel the hope, exuding through her brimming eyes. The script is nuanced and is filled with sharp social commentary in most of the scenes. We see a girl of Wadjda’s age with photos of herself in her wedding gown. The teacher plucks out from girl’s hands saying photos are not allowed at school. Wadja’s sudden interest in Koran recitation is in itself, an irony: She hopes to win by memorizing each verse to buy a bicycle or to remain as a rebel, opposing conformist societal values.

Although the parallels were never fully explored, there are definitely some subtly handled moments. Wajda’s mother’s slowly waning reluctance to buy a bicycle can be related with her frustration of boorish chauffeur, whom she must hire to drive across town. On a minimal scale, the script glances at, how forbidden freedom (the sub-plot involving two teenage girls) can constitute to arrive at ludicrous conclusions. There is also a mischievous sense of humor: Wadjda peels off a sticker from a tea cup to see a picture of devout Saudi mother and child. However, she comes up with a global reality, after inverting the cup to see a stamp saying, “Made in China.”

Director Al Mansour, being the first director of Saudi, had to stay inside a van in the shooting of exterior scenes, since a woman can’t be seen publicly working alongside with men. She has ably confronted all those restrictions and has efficiently brought out the simple, solid story on-screen. Cinematographer Reitemeier’s confident compositions resonate well with the movie’s themes.

“Wadjda” is a sweet-hearted film about a girl’s spirit and determination to advance against all odds. In the film, Wadjda writes her name in a paper and sticks it into her painted family tree (girls don’t belong to a family tree). That moment tells what this movie is about: ‘Girls do count.’

i hope i could watch these movies somewhere... the review is very good indeed..

Wonderful plot.. On my list now. Thanks for the review !

thanks for the review