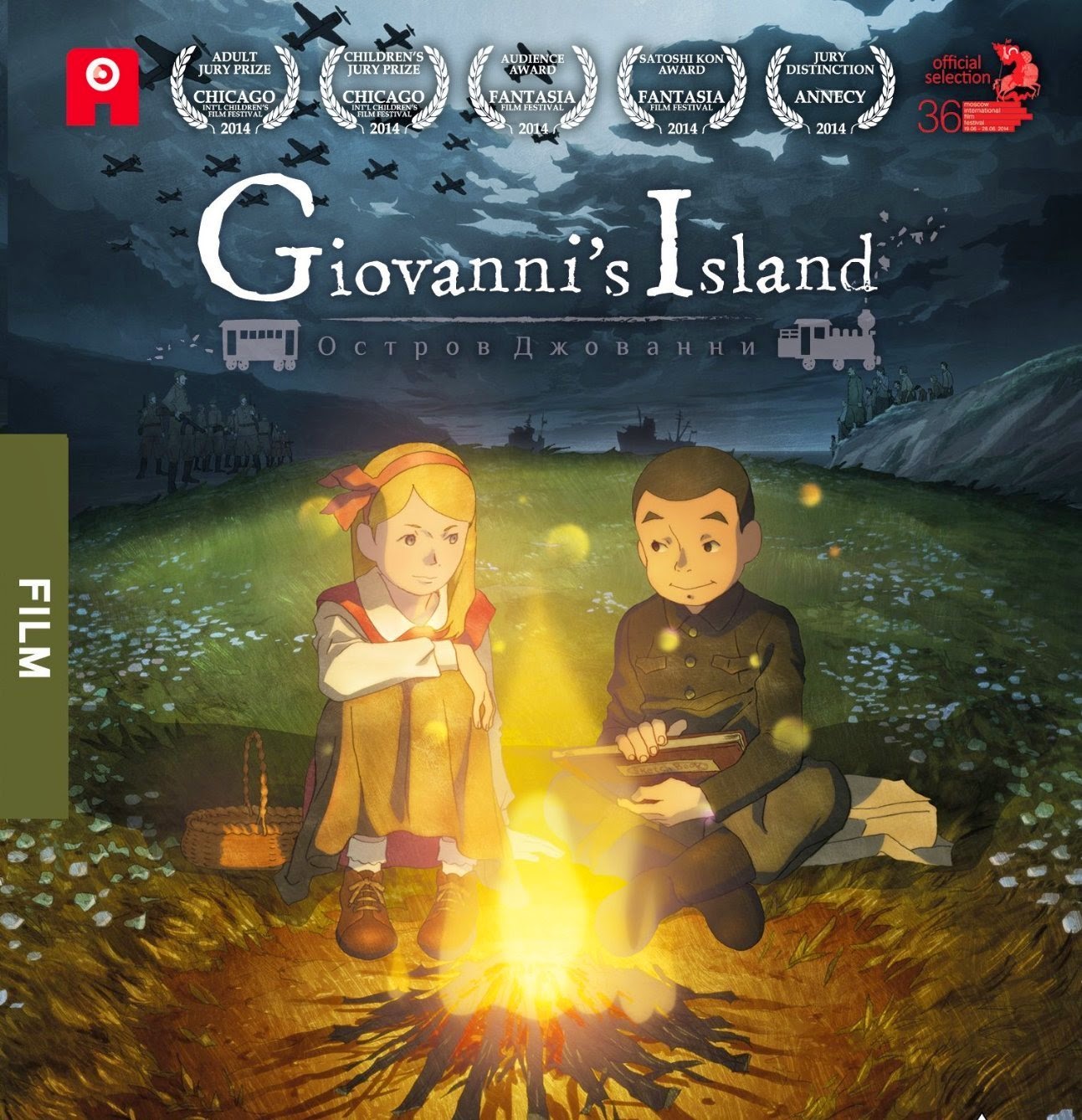 Isao Takahata’s powerful anti-war anime “Grave of the Fireflies” (1988) and Mori Masaki’s harrowing “Barefoot Gen” (1983) showcased how innocent souls get crushed when the manic leaders at the top battle for supremacy. It possessed unbridled beauty and enlivening childish delight, which made all the sorrow, fatigue and despair endured by the characters more lamentable. Mizuho Nishikubo’s “Giovanni Island” (2014) owns some of the spirit of those movies as it also tells the cruel fate of children caught in a conflict they don’t even understand. Though the anime is too melodramatic to be called a ‘masterpiece’, it does share the charm of Studio Ghibli films.

“Giovanni’s Island” tells a historical story that’s rarely explored in any kind of art form: the Russian Occupation of the island Shikotan, after Japan’s defeat in World War II. The island is said to still remain under the control of Russians, so we understand the necessity of telling this tragic story. The anime starts on July 4, 1945, on Shikotan. Many men have gone off to fight the war and we see the sportive two brothers – Junpei (10 year old) and Kanta – going on about their daily routine, which is hunting for bird eggs and attending schoolhouse, governed by Miss Sawako. The boys’ widowed father, Tatsuo is the island guard and he pretty much breaks down when Japan’s surrenders on August 15, 1945. Grandfather Genzou is a proud fisherman. Tatsuo is a hard-line guy and a loving father, who is enamored by the classic Japanese story, “Night on the Galactic Road” by Kenji Miyazawa. 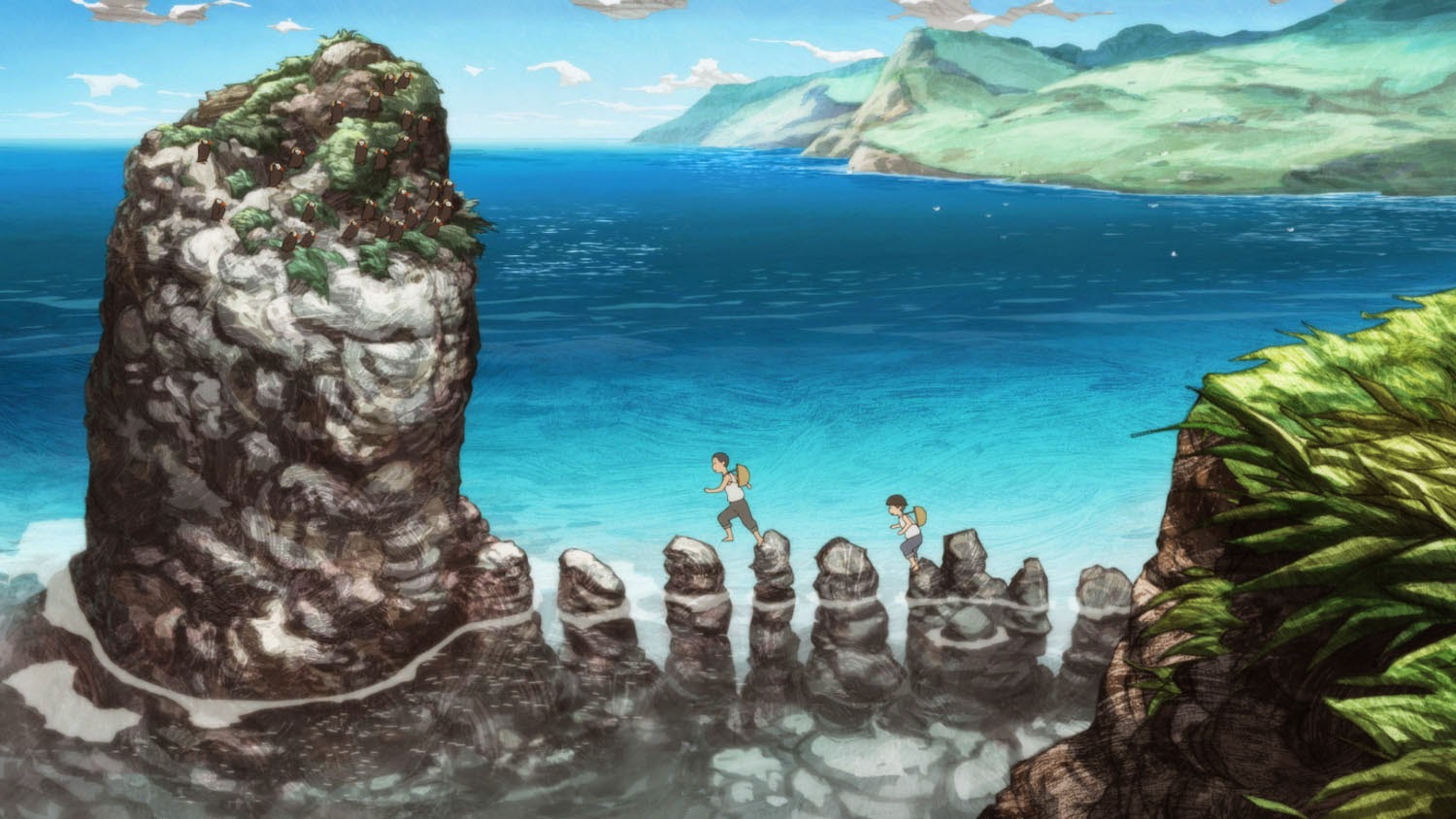 Tatsuo often asks Kanta to read the book and the boys are also drawn towards the story of two kittens going on metaphysical journey, aboard a magical railroad train. The brothers name themselves after the story’s primary characters – Giovanni and Campanella. They often dream about traveling through Milky Way on that magical train. Their lives are breached soon as Russian soldiers set foot on the island after Japan’s surrender. The Russian commander takes the boys’ home and they are allowed to occupy the stable. Junpei and Kanta’s reckless uncle, Hideo also arrives around the time and does some odd smuggling jobs. For the boys, the invasion has one favorable prospect: it’s the friendship they develop with their next-door neighbor Tanya, the daughter of commander. 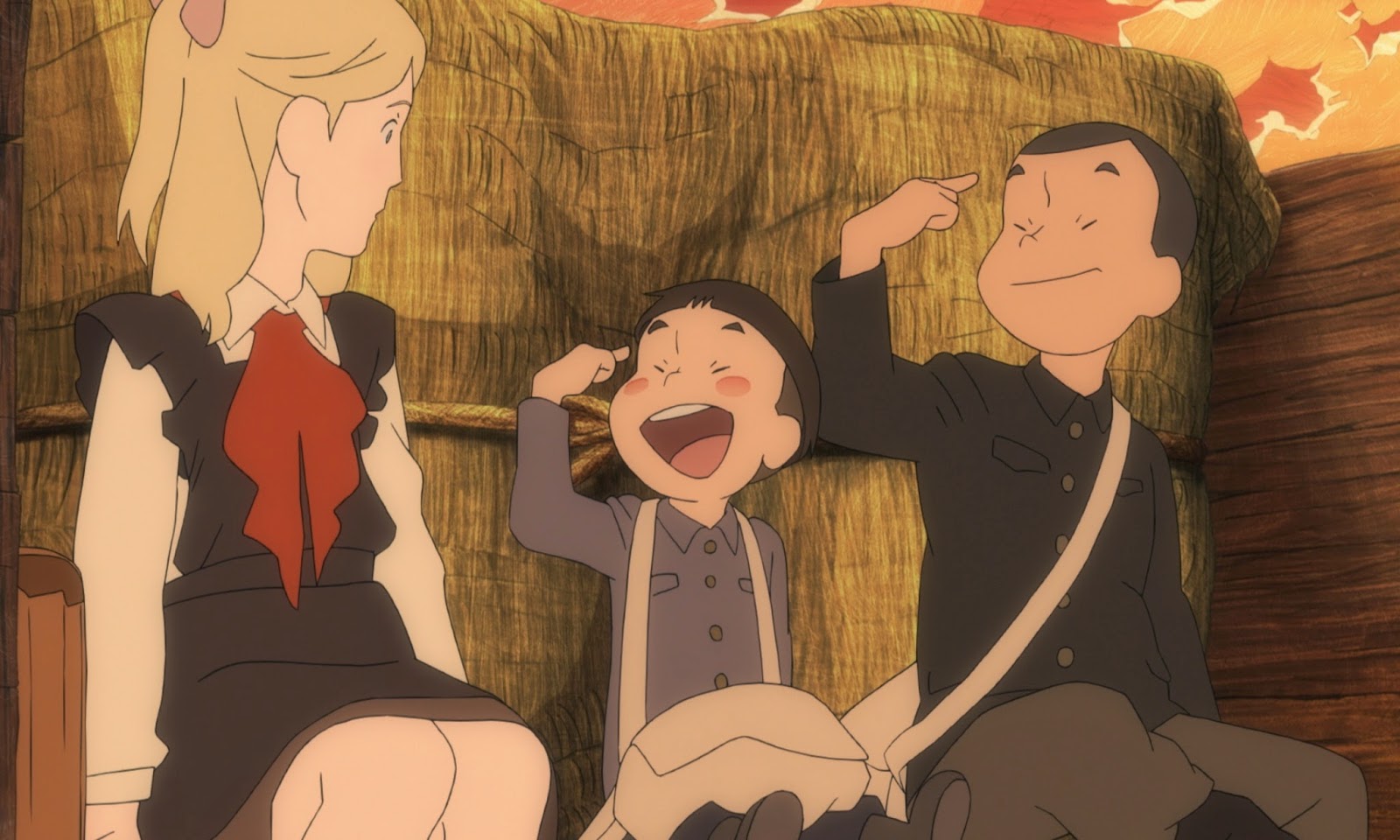 The blossoming relationship between Junpei and Tanya transcends the language barrier and presents some optimism towards cultural assimilation. The Japanese and Russian kids in the classroom too share an amiable relationship. But, things take a more serious turn when the boys’ father is arrested and all the Japanese residents of island are evacuated to a Russian internment camp. The conniving uncle and affectionate teacher accompany the boys. The bone-chilling cold weather and the impoverished conditions are too much to bear, but the brothers tell each other the fantasy tales, hoping for a better future.

The boys rendering the fantasy tale about a magical train traveling through the stars contributes to a lot of spectacularly drawn dream sequences. Apart from these stylish, grandeur moments we are also captivated by the understated simplicity in many of the sequences. The initial sunny orange setting of the 1945 and the harrowing icy blue sketches in the later part subtly indicates us the change in atmosphere and the emotions. Even if I use a load of adjectives to praise those hand-drawn images, it would still remain as an understatement. One of the most beautiful animated images unfolds in the sequence when the boys realize that Tanya also has a fascination toward trains. From the both sides of the house, they connect the tracks for model train sets and as the train runs through Tanya’s and the boys’ place, we know a connection is being forged, literally as well as metaphorically. 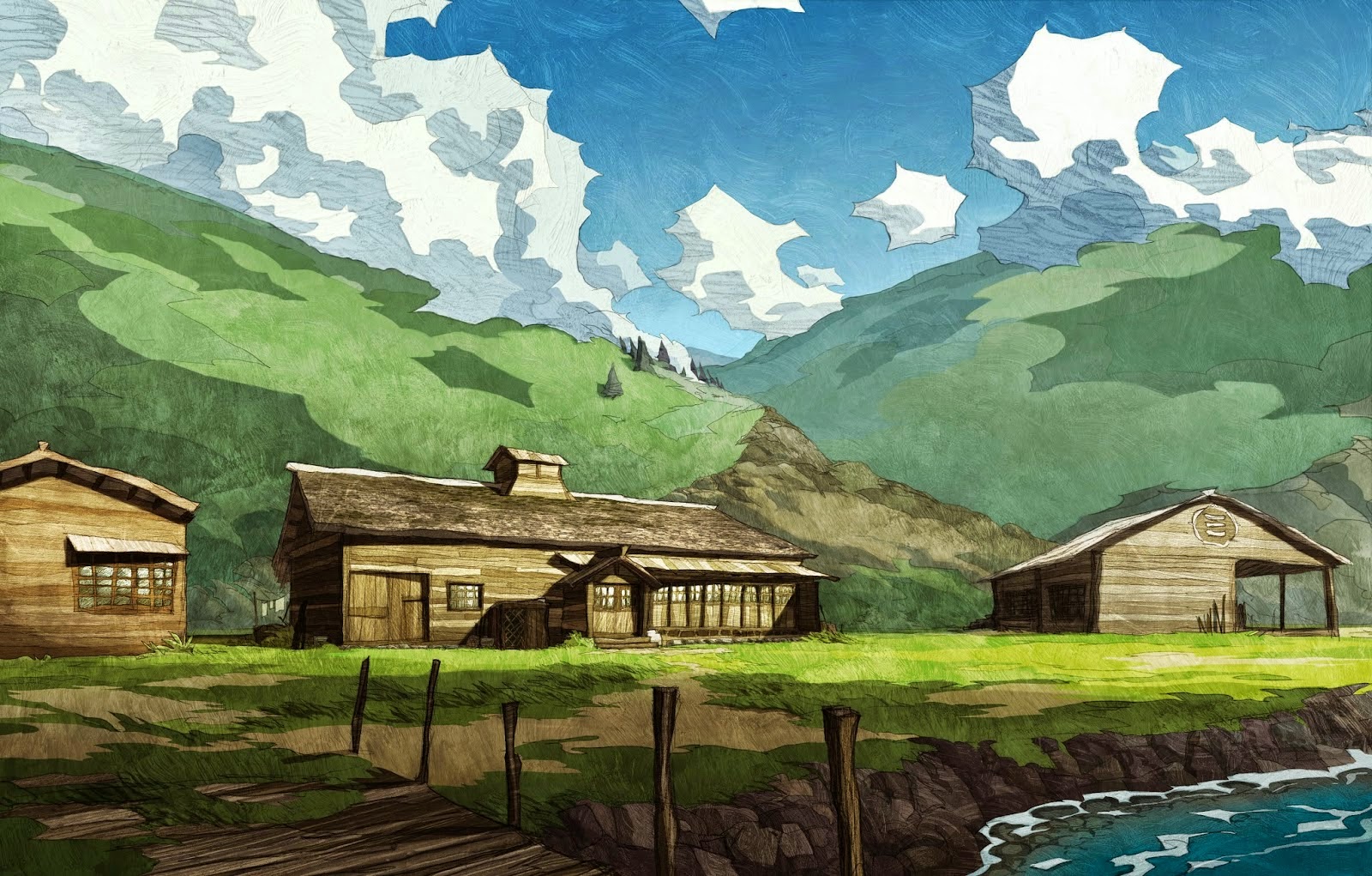 The story is also stated with sensitivity. The Russian characters aren’t demonized. The invading soldiers are shown as human beings, obligated to carry on their duty. Both the good and bad qualities of the Japanese are also explored. Even though the uncle Hideo character initially comes off as a scheming, selfish guy, he is also shown to have a more genial side. The second-half of the anime remains emotionally overwhelming. The sentimental streak gets overboard in these parts as they are designed to make us cry out our eyes. There’s nothing wrong with crying for these distressed souls, but the tears are slightly manipulated than genuinely earned. Nevertheless, this part had one powerful scene, which happens when the boys meet their father in prison camp as two towering fences stand between them. The boys and the father achingly stretch their hands to touch for one last time. 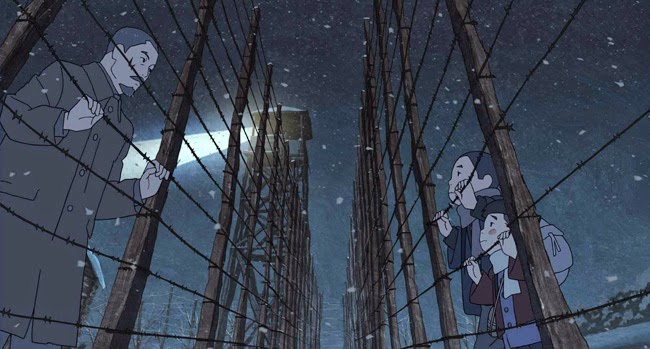 The first-half of the movie was more wonderful and a fine coming-of-age story as we watch the young innocent love between Tanya and Junpei. The director in these early sequences also tries to show the resilient nature of the children and the common humanity they inherently possess. We often see Japanese and Russian children in their respective classroom loudly singing their respective folk songs. But, at some point later, the Japanese and Russian kids try to sing each others' folk songs. This small but powerful moment shows how conflicts and ever-threatening situation lie only in the minds of adults.

“Giovanni’s Island” (102 minutes) is one of the most beautiful animated films of the recent times. The narrative doesn’t have the poignant eloquence of the classic Japanese animes, but it still intensely affects our emotions.