Stations of the Cross – A Provocative Religious Drama 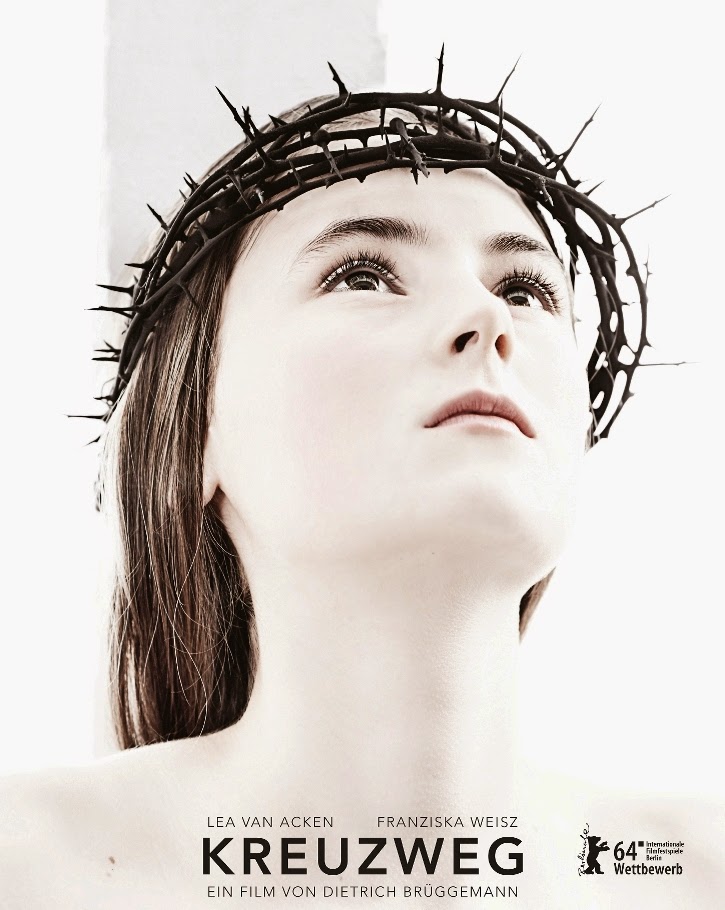 The detrimental effects of religious indoctrination seem to lie at the heart of brilliant, provocative German drama, “Stations of the Cross” (aka ‘Kreuzweg’, 2014). The movie directed by Dietrich Bruggermann (and co-written by his sister Anna Bruggermann) uses the simple context of sectarianism to raise complex questions about intolerance, self-censorship, and altruism. What’s more interesting about the film is that the film-making style itself is rigidly constrained, echoing the tightened beliefs of the religious sect it portrays.

“Stations of the Cross” is a series of representations, which contains 14 pictures that depicts Jesus’ final journey (from death sentence to his crucifixion). The beautifully constructed and acted film is divided into 14 sections, shot in 14 single takes, cut from one black title card to another, announcing each step of the final journey. The protagonist is a 14 year old girl Maria (Lea Van Acken), who is carrying a hefty emotional cross in her heart. We first see her among a group of pupils in a Sunday class, taught by Father Weber (Florian Stetter) about the rights and wrongs of the spiritual world. This lecture is happening one week prior to the teens’ ‘confirmation’ ritual. 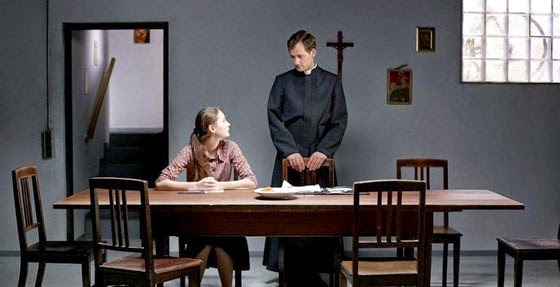 The scene goes on for nearly 15 minutes as the young and engaging Father goes on talking about sacrifice and the ways to fill one’s heart with the love of Jesus. Maria’s is a member of a sect called ‘Society of St Paul’ (fictitious one), which no longer recognizes Rome’s authority (as Father Weber says:"Because Pope and Vatican turned their backs on 2000 years of tradition"). In this sect, the host is never handled and the music that contains loud beats is deemed as a ‘Satanic influence’. The confirmation ritual is the passage to their adulthood and a stage to draft themselves into the army of soldiers for God. Maria is seriously worried about her 4 year old brother, Johannes. The boy refuses to or can’t speak. Maria wants to offer her life as a sacrifice to God to save her brother.

After that initial talk with the Father, Maria goes to great length to make sure that every action conforms to the stringent beliefs of her church. The little desires she possesses are also crushed by her over-bearing mother, Mutter (Franziska Weisz).  Maria’s father doesn’t talk much and an ineffectual guy in front of his wife. The only family member who provides Maria some comfort is the Au-pair Bernadette (Lucie Aron). The notions of sin haunt her when a charming boy, Christian, asks her to sing in their church’s choir. When Maria tells about the boy’s invitation to her mother, she hollers that the girl is in pursuit of flesh. All the psychological abuses Maria endures only paves way to make a journey that replicates the one taken by her God. 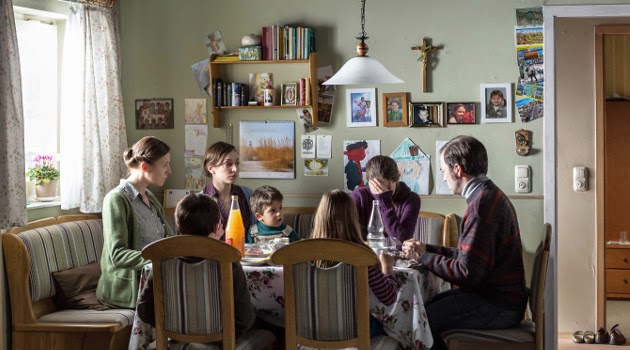 Each of the well-composed chapters is filmed with a piercing clarity by DP Alexander Sass. The muted palette itself echoes the severity of the subject. The camera mostly remains static, except for three shots. Director Bruggermann’s each compositions reminisces some distinct religious paintings as we see characters/character gathering around dinner tables, classroom, and confessional with a poetic stillness. The acting and these shot compositions may be precisely choreographed to little details, but everything emerges naturalistic as if we are observing something tangible. The meticulous fixed frames reminded me of Haneke’s films (especially “The White Ribbon”).


The themes and the setting would immediately make us recall the nuanced works of Ingmar Bergman and Carl Dreyer. But, at the same “Stations of the Cross” more or less, looked like a companion piece of Bruno Dumont’s “Hadewijch” (2009) and Cristian Mungiu’s “Beyond the Hills” (2012). The angelic conduct of Maria brought to mind the face of Agata Trzebuchowska in Pawel Pawlikowski’s “Ida”.  The girl is often judged and taught that her look can provoke sins, but it’s banal belief that doesn’t adhere to this particular religious sect or society. The thought Maria has about Christian is immediately externalized as very impure and priest, inside the confession booth, goes on to ask: “Did you look at him in a manner that may have raised unchaste thoughts in him?” The question is something universal that may be used to confront a girl, whatever their beliefs are. The psychological abuses Maria faces isn’t contrived to beset a particular religious or Catholic sect. It perfectly observes how even the basic maternal love could be consumed, when you place the ideology or belief above everything else. 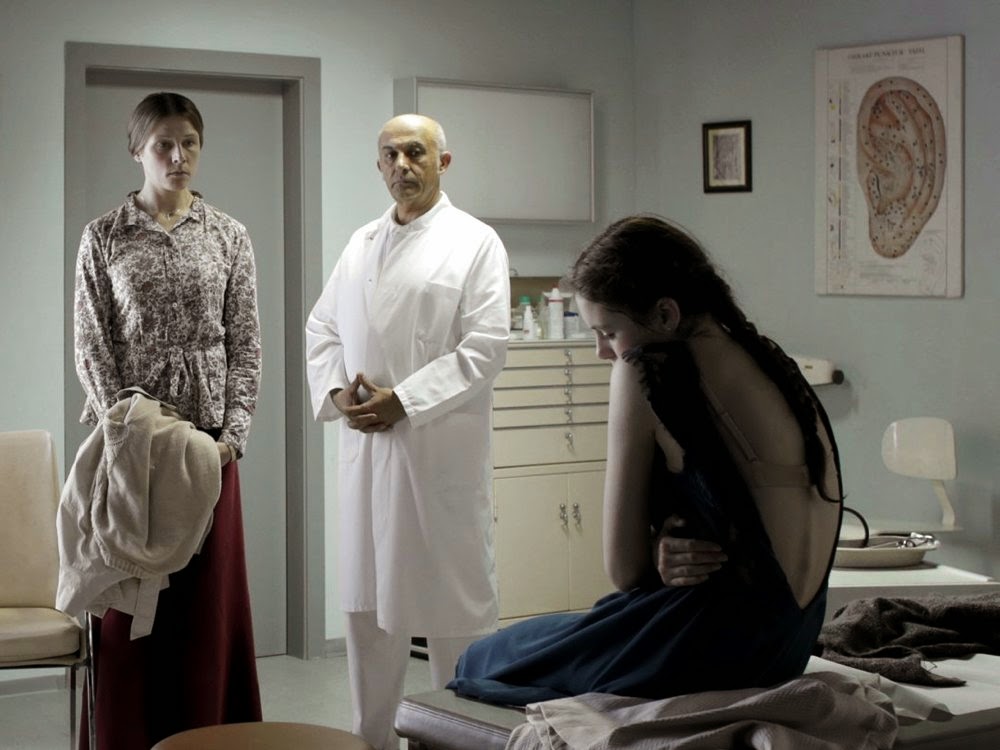 
Maria’s dangerously righteous mother and the impassioned Father Weber blabs about their notions of sin, sacrifice, Jesus etc, but they never talk about the love or trust that makes us human. In fact, all the extremist groups avoid the word ‘love’, so that their distrusting belief could be advertised as a far-reaching brand. The radical practitioners of any faith see something demonic about how the world operates because its build on pillars of suspicion. Towards the end, when Mutter is going through a brochure, selecting a coffin, she rambles about how her daughter performed a miracle (miracle itself happened because of love), while the throes of death loomed over her. She is satisfied about the way Maria died ‘in a state of perfect contrition’ and after completing the communion. Once she sees her husband’s dejected look, she gradually breaks-down and cries hard. This heart-breaking scene shows the inherent guilt feeling of the mother. Mutter knows that her daughter would have survived if she had showed love and trust, but tries to mask that thought by chucking out words like ‘beatification’. 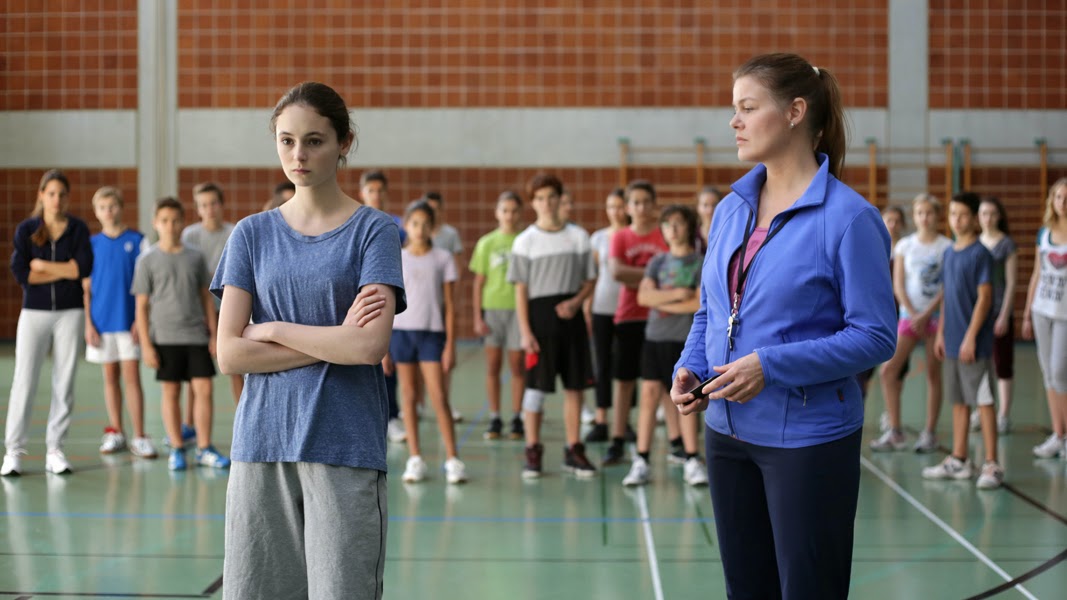 Although the movie boasts a tag ‘stark religious drama’, the script written by Dietrich Bruggermann and his sister Anna includes some subversive and darkly comic moments. Father Weber gives Holy Communion to Maria as she lies in the hospital bed, and places the sacramental bread on her tongue. It immediately leads to an appalling situation, where an orderly comes in, takes out the bread (“We’re not eating solids yet”) and asks the father “Have you gone mad”. Although what happens next is something sad, the expression on the Father’s face and orderly provides some wicked fun. The absurd notions regarding the rock, pop, soul, and jazz music is slightly dialed up for provoke a chuckle. These little comic moments, however, doesn’t make the director and writer to stray away from constructing those deep inquiring moments. The viewer’s thoughts wouldn’t have been kindled, if not for the revelatory and engaging performances, especially from the debutant Van Acken, who played Maria. It is painful to see that angelic and despairing face crumbling under the spiritual burden.


The stunningly shot and expertly acted “Stations of the Cross” (110 minutes) offers a transcendental and thought-provoking movie experience. It subtly exposes the constraining nature of hard-line religious doctrines.

Kreuzweg aka Stations of the Cross -- IMDb
at February 04, 2015
Email ThisBlogThis!Share to TwitterShare to FacebookShare to Pinterest
Labels: Allegorical Movies, Social Drama