The Neon Demon [2016] – A Polarizing Tale of Purity, Vanity, and Death 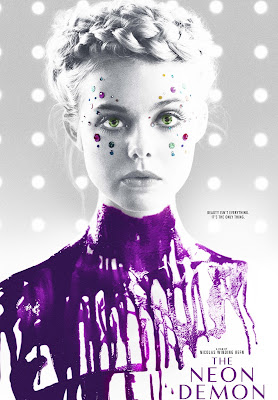 It’s a common knowledge for movie-lovers that you will be either enchanted or sickened by the films of maverick film-maker Nicolas Winding Refn. A middle ground doesn’t exist for a general viewer to relax and process their emotions. I love Refn’s works. I love it for the weirdly beautiful visual compositions and for the sheer unpredictability. This unpredictability factor doesn’t just exist in the form of a twist, attached to the plot trajectory; it rather lies in the way Mr. Refn conjures aesthetically brilliant image, totally disregarding traditional plot development. If I stop from being zealous fan of Refn and try to analyze his works from a shaky middle ground, I am kind of ensnared in a state of confusion. From “Bronson” (2008), Refn took a heavily stylized, hyper-real approach as opposed to the realistic depiction of criminal underworld in the “Pusher trilogy”. From then on his films were both utterly pretentious as well as unforgettably hypnotic. The film-maker’s visuals and subjects aren’t derived from moral self but rather from the subconscious level. As Refn himself stated in a ‘Guardian’ interview (after the release of fiercely booed “Only God Forgives”): “It's like pornography. I'm a pornographer. I make films about what arouses me. What I want to see. Very rarely to understand why I want to see it and I've learned not to become obsessed with that part of it.” While, the sexual brutality and other kinds of brutality plus the moral emptiness in Refn’s movie is questionable, I think his films could be analyzed better by comprehending the aggressive temptation to simply shock and to showcase the arousing images. There are plenty of campy elements and on-the-face metaphors in his films, but the frames withhold immense beauty that we are distracted from worrying over narrative cohesion.

Despite my love for Refn’s films, I must say that his latest venture “The Neon Demon” is mildly disappointing. Although, “Only God Forgives” and “Valhalla Rising” lacked the emotional connection, Refn built in his acclaimed feature “Drive”, the films had notions of mysticism and an enamoring surrealistic sheen. The ambiguity affixed to the mystical loner protagonists was engaging when compared with the totally artificial, disjointed characters in “Neon Demon”. The surrealistic glitter is as beautiful as in Refn’s other movies, but it felt like a stretch (Neon Demon is Refn’s longest movie so far, clocking at 118 minutes) to sit through as some of the portions are just plainly boring. Of course, there’s nuggets of visual insights to be savored even for a Refn’s mildly disappointed film, so as to warrant a second (or more) viewing. We know how like Quentin Tarantino, Refn’s characters are basically derived from other old movies rather than reality. As Refn referred to the existential hit-man & thieves (from Melville’s to Mann’s & Walter Hill’s) in the designing of Gosling’s hero in “Drive”, he takes infamous, vixens-filled-melodramas like “Valley of the Dolls”& “Beyond the Valley of Dolls” (script written by eminent critic Roger Ebert) as the point of reference for “Neon Demon”. He introduces an immensely attractive virginal 16 year old girl, aspiring to be a model, who gets devoured by three women trying to make a career for themselves in the dog-eat-dog fashion world (in the “Valley of Dogs” and its satirical sequel, three women get stuck in Hollywood’s debauchery). 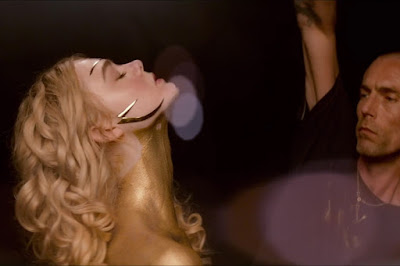 Refn’s vision of Los Angeles is that of a stranger and so it has a heightened dream-like quality. Refn’s protagonists are seemed to prop up in new surroundings, trying to get along, only to see their efforts getting overturned. Let it be the 11th one-eyed, enslaved man in “Valhalla Rising” or the Driver in “Drive”, we are not provided with detailed backstories (which was the essential ingredient in film-noir) about the central characters. Even a film like “Bronson” – a character created from real-life person—didn’t bestow any background details upfront. He just likes to drops us (like his characters) into a strange atmosphere to simply observe the joys and unstoppable injuries inflicted on protagonists. Elle Fanning’s Jesse in “Neon Demon” just appears in L.A. She is a beautiful girl from a small-town, boasting big aspirations to be a star. When we first see her, she is lying down in a sofa, cloaked in shiny blue dress and blood. She is totally lifeless and in a way, strangely enchanting. As the frame gradually widens to include cornucopia of contrasting color palettes, we sense the repeated camera flashes as if the dead woman’s body is being photographed by forensic experts. But no, this is not a crime scene; just a fashion photo-shoot. At the same time, the fake blood-drenched image establishes the inevitable fate of the girl. Among the existential worries that perplex handsome individuals, death of beauty would be the foremost worry. While, this film doesn’t profoundly deal with the obsession over halting the degradation of beauty, it looks into the weirdly beautiful nature of youth, preserved by death. The first shot and the actions of Jesse’s frenemy Ruby (in the scene of necrophilia) points out this notion of beauty and death. 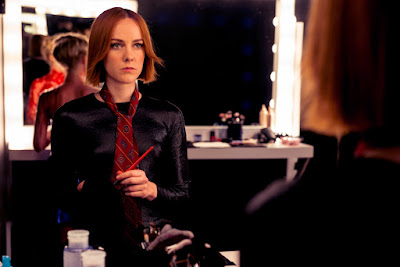 Although, people you often converse with would say ‘inner beauty is what counts’, in reality those same people would be instantly attracted towards external beauty. The answer to the complex question of ‘what is beauty?’ is hard to find, but we all instinctively and visibly react to an external beauty. Jesse is not just a shining empty vessel, like her overly ambitious fashion-world counterparts, Sarah (Abby Lee) and Gigi (Bella Heathcote). Her humane awkwardness and innocence elevate the surface beauty to greater levels. A kind of beauty the other girls’ face, hardened by plastic surgeries and emotional detachment, couldn’t possess. Jesse’s beauty radiates in the way she looks within herself, while gazing at the world around her. Since, the externally beautiful Sarah and Gigi doesn’t have much to look from within, they are easily revolted by the new-comer Jesse rapid climbing of the fashion ladder. The emotionless and sleazy men, who come across Jesse’s beauty, as we can guess, want to exploit her beauty for their betterment and art. In order to exploit her external beauty to perfection, these men (and women) kindle the inherent, hidden narcissism of Jesse. While Jesse was chosen for shining innocence, the molding of narcissism is essential to make her a ‘star’. This is well established in the magnificently staged surrealistic scene, where Jesse becomes ‘a diamond in the sea of glass’ (as you can see, she begins to kiss her image reflecting in the glass). Of course, Refn doesn’t use a traditional birth and death of a star story-line. His starting points are the perfectly-framed images and so the character motivations and plot trajectory remain ambiguous at its best, and boringly annoying at its worst. 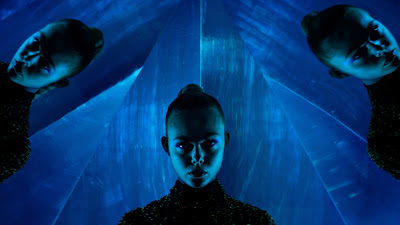 The men in “Neon Demon” are merely portals to kindle the women’s obsession. So, they are abruptly chucked out by Refn when deemed unnecessary (which we also straightforwardly call it as ‘bad writing’). Keanu Reeves’ sleazy hotel manager (Hank) character is utterly baffling one when compared to other characters. May be, he is there to point out to the film’s obvious metaphor of including a wildcat which devours Jesse’s motel room. He asks Jesse to pay for the damages, citing that she has kept open the patio door to allow the wild animal to enter. The man is obviously saying that Jesse’s life is going to be devoured because she left some figurative door open to let in some humans dangerous than animals (if you remember the scene, when Ruby applies lip-stick in front of mirror, glowing with hate for Jesse, you can see a taxidermied ‘leopard’ or ‘mountain lion’ in the background). The more subtle motivations of Refn are reflected in the way he uses colors like red, green and color (I have to re-watch it to ponder over the abstract triangle image, Jesse sees in the pond) to indicate the themes of death, vanity, and empowerment.


More than the ‘diamond in the sea of glass’ visual imagery, the subtler and astounding one (imo) was the one in nightmare sequence, when Keanu Reeves’ character forces a knife deep down Jesse’s throat. In an interview to ‘Vulture’ magazine, Refn calls this scene ‘as the nightmare reflecting Jesse’s fear of penetration’. In that scene, Jesse places her ear at the cardboard walls and dreadfully listens to the screams next door. The frame catches Jesse, huddling close to the wall, from the other darkened side. While the earlier ‘diamond in the sea of glass’ image reflects the power of Jesse’s beauty, this nightmarish image seems to indicate her loneliness and paranoia attached with such a power. The most commendable aspect of Refn’s camera angles is that is never gazes at the scantily-clad women, from the perspective of a male gaze. Lust is not evoked in the way these women walk in front of male stylists and photographers. Refn only observes Jesse’s apprehension and gradual surge of self-love, while she walks or when she is photographed. Even though, director Refn seems to increasingly make movies with limited scope and within a comfort zone, his ability to conjure such sensible as well as nuanced images is what makes us believe on what a vital, provocative film-maker he’s going to be in the next decade or two. 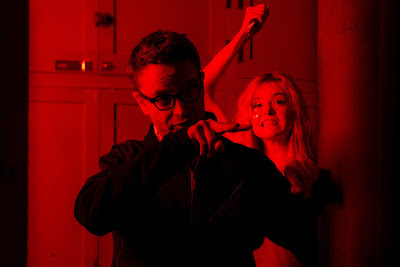 To quote from another one of Refn’s interviews, “On one level, Jessie can be seen as, you know, a deer in the headlights, an innocent coming to a giant city of sin. At the same time, she could be an evil Dorothy, coming to the city in order to poison the Wizard.” I could feel the deer-in-the-headlights side of Jesse (which Elle Fanning’s resplendent face perfectly exhibits), but this ‘evil Dorothy’ side is neither engaging nor fully realized due to teetering narrative. It is no doubt that the director bizarrely surprises us till the end, dangling the question of ‘what is beauty?’, but at some point the weird path it takes becomes so exhausting. Or may be I should give this film another try to understand the mixed feelings, but in the first time watch, “Neon Demon” wasn’t very engaging (even “Valhalla Rising” was more engaging in the first time watch). However, I’d like to finish this meandering write-up (which I wanted to be a ‘fine review’), with Refn’s thought-provoking words in the ‘Slant’ magazine interview: “Go home, watch “Drive”, and you'll see the height of male fetish. You watch “Only God Forgives” to deconstruct it, to emasculate, so you're crawling back into the womb of your mother to be reborn as a 16-year-old girl, who was born beautiful. Then watch “The Neon Demon” again.

at September 02, 2016
Email ThisBlogThis!Share to TwitterShare to FacebookShare to Pinterest
Labels: 2016 Movies, Surrealism