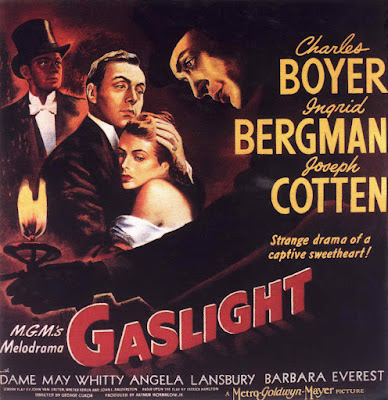 The 1938 play by British playwright Patrick Hamilton known as “Gaslight” led to the formation of term ‘Gaslighting’, which from then on is used in clinical and research literature of psychiatry field. Gaslighting is known as a type of psychological torture, where the victim is perfectly manipulated so as to question their own sanity. This systematic manipulation of the mind was immortalized by the adaptation of play in 1944, starring cherubic Ingrid Bergman. Before the American film-maker George Cukor’s adaptation, British film-maker Thorold Dickinson made the film on same subject with Diana Wynyard playing the central character. Its success led Hollywood studio MGM to buy the remake rights and a clause insisted to destroy all versions of Dickinson’s version. However, the British director saved a print and donated to BFI and the institute’s National Archive later digitally remastered the British version. George Cukor’s version gained immense critical acclaim (Bergman won first of her three Oscars) and a good box-office run. Although over the years, the 1944 version is decried of its classic status, by citing plausibility issues and by calling it a ‘travesty’, I feel that it still remains as a rich, intricate study of an emotionally torturous marriage. As David Melville in the ‘Senses of Cinema’ article (titled ‘Madman in the Attic’) says, “The playing of Charles Boyer and Ingrid Bergman maps out the mechanics of torture and ecstasy, dominance and submission, with a clarity that the makers of The Night Porter (Liliana Cavani, 1974) or The Story of O (Just Jaeckin, 1975) could only dream of”.

Nominated for seven Oscars, “Gaslight” is one of the best film-noir/melodrama of the 1940’s. Critic Emmanuel Levy states that “Gaslight” belongs to string of paranoid thrillers made in 1940’s, where rich younger woman are threatened or driven to insanity by their middle-aged husband. From Hitchcock’s majestic adaptation of Daphne du Maurier novel “Rebecca” to Anatole Litvak’s “Sorry, Wrong Number”, the women’s residing place itself is transformed into a cage of terror by their ‘beloved’ husbands. Apart from Bergman’s heart-rending performance, “Gaslight’s” classic status hinges upon impeccable art direction (for which the film won an Oscar) and set decoration. The sets reminds us of silent expressionist era films (from Germany 1920’s), where stifling closed spaces creates more paranoia. The film opens with a shot of flickering gaslight on Thornton Square, London. This later becomes a symbol for the heroine’s dreadful mood –which incites doubts on her rationality (manipulated to perfection by her victimizer). In the first scene, young Paula Alquist (Ingrid Bergman) stable life in Thornton Square is extinguished due to the murder of her guardian & Aunt Alice Alquist, a legendary opera singer. The murderer isn’t found and young Paula is sent to Alice’s master in Italy. 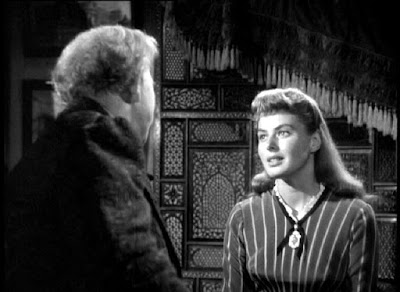 Ten years passes by and the angelic Paula is in love with a man named Gregory Anton (Charles Boyer). She gives up her singing lessons and the aspirations to be singer to marry the man. After enjoying their honeymoon in Italy, Gregory talks about his desire to live in a fine house in London. Although Paula wants to severe the ties with her aunt’s home (which she has inherited), the love she has for husband make her to move to the old, Gothic house. Through brief close-up shots, focusing on Anton’s eyes, director Cukor hints us about the husband’s greed and hidden hideous nature. Tension slowly starts to build as Paula begins to misplace or lose things. The hiring of young, cheeky maid Nancy (Angela Lansbury) adds up to Paula’s unrest. In a nuanced manner, Gregory continues his well-thought out campaign to make Paula believe that she is forgetful and eventually insane. The man who swept her off feet becomes the man who wants to drive her out of mind.


In the ‘Senses of Cinema’ article on the film, great analysis has been done about the narrative’s inherent erotic nature. Paula, while slowly submitting to Anton’s psychological tortures, continue to remain under the man’s spell, which has ample sexual implications. As critic Melville points out in a passage, “Boyer parts the floating gauze curtain of the room where they have spent their wedding night. Bergman lies motionless on the bridal bed, her arms spread in a crucified pose. We wonder, just for an instant, if she is dead. Her bridegroom seems capable, quite literally, of fucking her to death. Once we return to London, it is clear Boyer uses sex to intensify his control over her – withholding his favors whenever she shows signs of independent life.” Apart from Anton’s cruel treatment, his flirtation with young Nancy (who responds in a brash manner) adds up to Paula’s psychological pain. Angela Lansbury, in her first ever movie role (she was working as a cosmetics girl), is said to be of the same height as Bergman. In the first introductory scene of Nancy, she is dressed up in rich, elegant clothes like her mistress. But, her lewd manner makes Nancy look like an unrefined imitator of Paula. The sexual threat Nancy withholds brings up an intricacy to the emotional torture (inflicted upon Paula) rather than plainly relying on unsubtle cruelty of husband Anton. 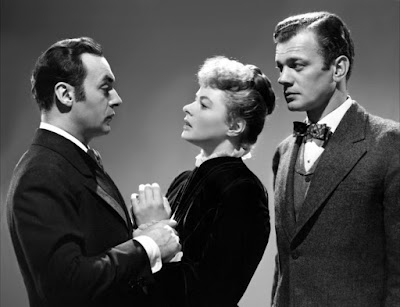 The script crafted by John van Druten, Walter Reisch and John L. Balderston is more convincing and engaging than the British version, as there was stronger (may be not strong enough for some) motivation behind Anton’s actions in Cukor’s version. Scenes of courtship between the two main characters are also absent in the British version. While the former movie adaptation, designed the character of detective as old, awkwardly comical man, in the Hollywood version, it was played by Joseph Cotten (which allows room to plant insidious doubts on Anton’s mind and also gives a possibility of romantic relationship at the very end). The humorous nature of British detective is transformed into a minor supporting character of old, nosy Miss Thwaites (played to perfection by Dame May Whitty). Although the film’s scenario is easy to guess (and it has been replicated in many other films), “Gaslight” haven’t lost its luster, thanks to a remarkable performance from Ingrid Bergman. Her fragile psyche, the unbearable suffering on-screen and the final, fitting emotional burst is so compelling to watch (Bergman also deserved an Oscar for her delightfully nuanced performance in Hitchcock’s “Notorious” (1946) – she had a ghoulish husband in that film too). She conveys the film’s campy, melodramatic notes with great elegance. It is astounding to witness the way her mood wavers like the dimming/illuminating gaslight in a scene when Anton alternately accuses and delights her.