Zoom [2015] – A Meta-Movie Bogged Down by Superficiality 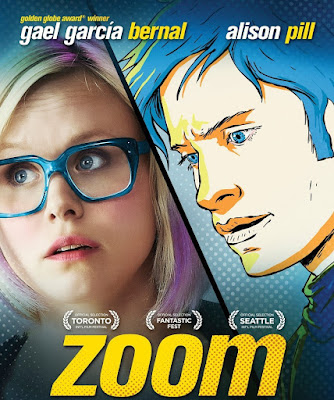 Pedro Morelli’s Canadian-Brazilian co-production English film “Zoom” (2015), a weirdly funny meta-fiction, starts off somewhere in Charlie Kaufman territory and ends up being a shallow gimmick. As in the acclaimed American screenwriter’s tales, “Zoom” sprouts from the obsessive, insecure feelings of a person about their external appearances. Emma Boyles (Allison Pill) works in a sex doll manufacturing factory (although the place looks like a big cellar or garage) making ‘the perfect body’. Her co-worker is Bob (Tyler Labine) whom she uses as ‘co-worker with benefits’, and has a session with him during the lunch hour. Being around the super-realistic sex toys, Emma is caught-up with the obsession for surface beauty and shows a sketch of herself with bigger bosom to Bob. The guy dismisses the sketch, telling she is not that type of girl (code-word for ‘not sexy’) and that her ‘natural ones’ are his friends. It is the kind of idiotic thing a guy working at sex doll factory can say to his co-worker with a desire to get large breasts and so the enraged Emma sits in front of a surgeon with the money she has saved for buying a condo. She is a bit hesitant about the spending money for such an operation, but the doctor convinces her with simple words: “well just remember, you can’t show off your condo at the beach”.

It’s like they say, “Be careful what you dream, your dreams might come true”. Emma gets her wish, saves the new selfie as FB profile picture, deletes the comment that asks whether she has enlarged few things, and happily looks at the soaring number of ‘likes’. Gradually, she feels uncomfortable with her current physical self. She hates the stares of men, while walking along the street and simultaneously pours her heightened insecurity into a graphic novel character Edward Deacon (Gael Garcia Bernal), an action-film director turned art-house film-maker, who wants to save his work from the clutches of a big studio. While Emma’s tale moves in live-action space, her imaginative tale of Edward unfolds in animated space, which reminds us of Linklater’s “Waking Life” or “A Scanner Darkly”. Edward gets everything: from fame to money to girls. But, when Emma feels downcasted, she inflicts loss on her creation by shrinking Edward’s man-hood. Apart from these two-interconnected tales, there’s a third one involving Brazilian model-turned-novelist Michelle (Mariana Ximenes), who leaves her disapproving husband Dale to a Brazilian island for penning her novel. Can you guess whose story she is writing? In the animated tale, Edward seems to be making a movie about a model. As the dead-locked interconnected tales spins out of control, themes of self-destruction to sexual objectification to creative inspiration are pondered over. 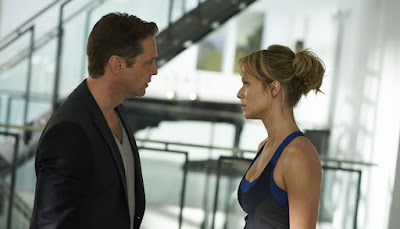 Pedro Morelli’s script and directorial style can’t be accused for lacking energy. In fact, there’s so much of energy that the narrative and characters are upended to only showcase or epitomize the verve. For such a multi-dimensional narrative, “Zoom” doesn’t boast any multi-dimensional character. Michelle, Emma, and Edward are initially written as ‘type’s to observe how they are objectified based upon their physical appearances. But, these stereotypes never transcends to become a real character or an engaging scenario as the three persons strive to breakthrough the roles, assigned to them based on surface looks. Writer/director Pedro Morelli (co-writer Matt Hansen) opts to diffuse the vision of stringent Hollywood producers, which is a cool idea, but also heavily impacts the other themes his narrative deals with. While Morelli takes a dig at the ‘commercialization’ forced down the film-maker’s throat by studio-heads, he loses the emotional impact he created through the earlier personal moments involving Emma and Michelle. 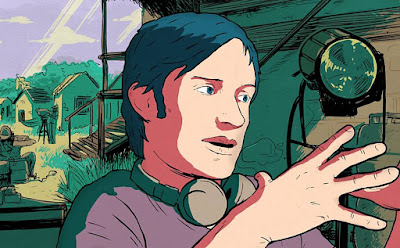 It is commendable to have created a meta narrative, linking character destinies, not just be the positive aspect of ambition, but also by darker aspect of self-destructive impulses (creation and destruction of their lives is ‘literally’ in the others’ hand). But, the journey taken by characters and ambiguous destination becomes tedious than invigorating. The director is self-aware about the cliches and makes a thicket of in-jokes. However, being aware of cliches in the narrative doesn’t absolve the inclusion of the cliché. The excessive use of humorous self-awareness fails to scratch beneath the surface. Of course, it’s understandable that such an interlocked narrative needs a fair amount of goofiness and absurdity in the third act, but the goofiness is there in tiresome proportions. The Russian nesting doll plot structure will certain dazzle some viewers and it may be perceived as a wondrous tongue-in-cheek observation of parallels realities. For me, the script’s creativity tides too much to become disconnecting.

“Zoom” (94 minutes) is definitely worth a watch for the way it literally and creatively addresses the intricate connection between authors and their creations, alongside the themes of body image. If it had toned down its absurdity and made the critique sharper, “Zoom” would have been a truly distinct work.

at September 14, 2016
Email ThisBlogThis!Share to TwitterShare to FacebookShare to Pinterest
Labels: Black Comedy