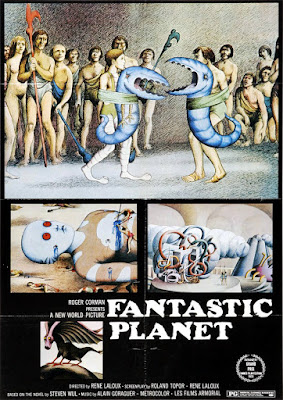 Roland Topor, Alejandro Jodorowsky, and Fernando Arrabal, in the early 1960’s collectively formed ‘Panic Movement’ [named after Greek mythological god ‘Pan’ – God of nature & wild]. Influenced by Salvador Dali, Antonin Artaud, and Luis Bunuel, the trio did surreal performance art to provide a counterpoint to the increasing mainstream spin on surrealism. Most of their theatrical works were deemed ‘shocking’. While Jodorowsky and Arrabal started to work on feature-films (from late 1960’s and they dissolved ‘Panic Movement’ in 1973), artist Roland Topor wrote the novel “The Tenant” (which was made into a movie by Roman Polanski).

Around the time 'Panic Movement' was initiated, in France, animator Rene Laloux, who went to art school to study painting, took a job in a psychiatric institution. In the early 1960’s, he hosted series of creative workshops, including painting and puppetry, and also did experimental animation short with the interns. They were made just with moving paper cuts, although these shorts won prizes at festivals. In 1964, Laloux made contact with Topor with whom he made two shorts – “Dead Times” (1964) and “The Snails” (1965). By the late 1960’s, Topor and Laloux decided to work on a full-length animated feature, based on dentist-turned-sci-fi-writer Stefan Wul’s novel [“Oms en serie”]. Since there weren’t many full-length animated films were made in France at the time, they started their project in the great Czech illustrator Jiri Trnka’s studio. In Prague, Trnka is known as ‘Walt Disney of Eastern Europe’ though there is no similarities between their works.

Roland Topor created the designs; Laloux took the direction part; and the Czech team made drawings for the actual film. Alas, the production went to inanimate stage due to Soviet Invasion of Czechoslovakia and the subsequent censorship. Moreover, they ran out of funds. Eventually it emerged safely from the blistering communist censors and the film was screened at the 1973 Cannes Film Festival. Rene Laloux’s trippy visual experience titled “La planete sauvage” aka “Fantastic Planet” went on to win Grand Prix Prize at Cannes and also got nominated for the ‘Golden Palm’. The trouble this film ran into during Soviet occupation of Czechoslovakia made many to read it as an allegory of Soviet Union’s cruel treatment of its satellite states. While it could be interpreted in many different ways - from political to theological - “Fantastic Planet” is basically a cautionary tale of (our race’s) thoughtless violence and stresses the need for individuality. 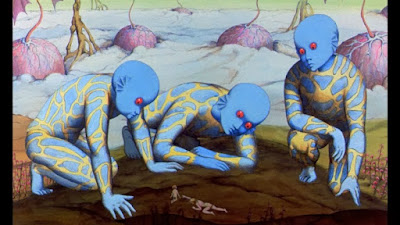 The mesmerizing cut-out tableaux, the twisted creatures and landscape gained the ‘cult status’ and continues to revered among devotees of mind-expanding substances (‘psychedelic’ is the word often thrown in relation to the film). The story is just rehashed version of biblical story ‘Exodus’. A baby Om (humans) named ‘Terr’ is rescued and grown as a pet by 100 feet tall ‘Draag’ leader’s child [named Tiwa]. The intelligent, grown-up ‘Terr’ steals the simple device of knowledge from ‘Draag’ to find a place among the wild ‘Oms’. After facing near-extinction in the hands of draags, Terr eventually leads the downtrodden ‘Oms’ to a new land. The film opens on a sinister note as we see a woman, dressed in rags, clutches her small baby and runs through strange, desert scape. A giant blue hand blocks the woman’s path, which is revealed to be that of a ‘draag’ child’s. Three draag children are just playing with the female ‘om’ and they accidentally kill her.


Draag’s are giant creatures, living in a planet called ‘Ygam’. They have advanced technology and are often engaged in hallucinatory meditation sessions to expand their spiritual knowledge across realms (draag’s souls float around as little balls in space). As much as they exhibit logic and reason, they also have emotions. Like our human parents, draags too insist on the need for learning and succumb to the children’s desire to have a pet. The pet in this case are actually tamed, inferior human-like race. Despite the showcase of intelligence by ‘Om’, the race is considered inferior and often referred as ‘vermin’. The draag girl Tiwa loves her pet Terr in the same way we love our pets. She inflicts casual torture upon her 'pet'. This casual cruelty contrasts significantly from their teachings, search for inner peace and technologies, pretty much like our own apathy. Like the humans’ inferior treatment of fellow humans, the draags feel no emotion in mistreating the ‘Om’. In the Draag council, there’s proposal for ‘de-omisation’ (read it as ‘genocide’), which has obvious parallels with the many human-led massacres. Apart from the satirical and allegorical portrayal of ‘draags’, the Oms are also handled in an even-handed manner, painted with their own superstition and ignorant attitudes. 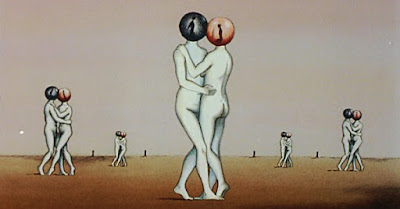 Those who are expecting a thoroughly entertaining animated fare would feel disappointed by the film’s flat narrative tone. In fact, there’s less dynamism when compared with Jan Svankmejer’s works. Since the creators were much interested in designing their vision, not much focus is given to apt narrative beats. But, what’s fascinating about “Fantastic Planet” is the imaginative visual surrealism, which reminds us of Bosch as well as Dali’s paintings. Terr’s journey into the Ygam’s weird landscape is filled with interesting creatures and wild plants that are alternately haunting as well as funny. The gleaming crystal outgrowths, the multi-limbed foliage, huge trees with vacuum-like openings, giant insects and the various eroticized landscape imagery - phallic & vaginal structures - invokes a ghastly as well as mirthful emotions.

The hand-drawn lines provide incredible and intense sense of detail, transcending any accusation for datedness. Rene Laloux directorial approach is that of a stationary observer, which escalates our interpretation with familiar horrors. Of all the sensational images, one of the most unforgettable visual from the film is that of encased ‘draag’ soul attaching itself to headless naked bodies, marooned at Ygam’s moon, to make a elegant waltz. In other words, it could all be termed as ‘a marvellous mind f**k’.


While “Fantastic Planet” (72 minutes) is largely known for the fanciful, psychedelic designs, its true appeal lies in the meaningful way it questions our apathetic ways. The rich tapestry of images insists on the cardinal rule for survival – peaceful co-existence.

such a detailed post. thumbs up to that.
the premise and execution does look interesting.must watch it some time...let me see

Thanks for taking the time to read & comment. Do watch the movie and tell me your opinion of it.