The Meddler [2015] – A Melodrama with Authentic Character Dynamics 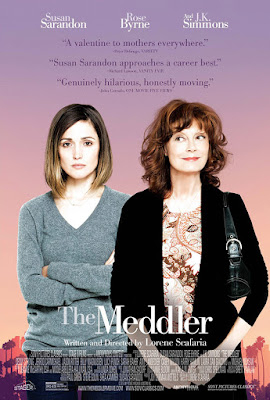 Lorene Scafaria’s second feature-film is as cutesy and melodramatic as its title suggests -- “The Meddler” (2015). But, despite the clamorously manipulative dramatic layers, the film holds certain nuances that also makes it a refined study of loss and misery. The film could be briefly explained as the story of three individuals, emotionally afflicted by some form of separation from their loved ones. How they reach out and reach within themselves makes up for the plot trajectory. Among the three individuals, the most satisfactory character and the one who occupies a lot of running time is Susan Sarandon’s Marnie ‘meddler’ Minervini. She is a widow, who despite the smile plastered over the face can’t handle the time, passing on earth without her husband’s presence. Although she likes to talk a lot, Marnie doesn’t want to talk about disposing her husband’s ashes or about choosing a grave marker. After her husband’s death, Marnie has moved to a posh neighborhood in Los Angeles, which she comments as ‘like living on Main Street in Disneyland’. She is there to build a strong bond (or restrengthen the ties) with her emotionally stunted early 30’s daughter Lori (Rose Byrne), a writer whose script has been recently green-lighted for a ‘pilot’ episode. Apart from the loss of father, Lori carries an extra baggage of losing her boyfriend Jacob, an actor, who is alleged to be still sleeping with her, even though he has no feelings for Lori.

Lorene Scafaria’s premise and characters gives us a familiar feeling, but the transcending factors are the performances and subtle writing. ‘Anyways’ is a key word. It is the world Marnie often uses to start a sentence while incessantly talking to her daughter’s voicemail. It shows that Marnie has been talking and talking, digressing through one topic to another, without ever getting a fitting replies. May be Marnie is always like this –talkative. However, the newly found loneliness along with the guilt of possessing lot of husband’s money makes her search for love or at least a recognition, if not from the daughter then at least from strangers. She chooses for surrogate relationships with a young African-American iPhone store employee Freddy (Jerrod Carmichael), whom she instigates to go to college and offers to drive him daily to his classes. And then, a chance conversation with Lori’s acquaintance Jillian (Cecily Strong), an young lesbian mother, makes Marnie to pay for the girl’s dream wedding. She also offers to babysit the adopted kid. It is clear that she is desperate to fill a void created by demise of husband and by rejection from daughter. Through sharing money, Marnie is intent on creating a bond with strangers, which may not give as much pain as the real relationships with the truly loved ones. Her activities in forming surrogate bonds hit a block when she meets a potential love interest Zipper (a brilliant J.K.Simmons). The man also has broken ties with the family and similar to Marnie’s ‘grand-dogs’ (childless Lori only has dogs to take care of), Zipper has his substitute, music-loving chicken family. 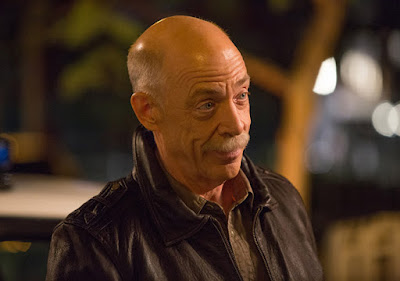 A big applause to writer/director Scafaria for not treating “The Meddler” as a standard issue, parent-without-boundaries comedy, sprinkled with crude jokes. There are cutesy slow motion shots, finely packaged resolutions, and overly sentimental dialogues. But, as I mentioned earlier, Scafaria surprises us with some of the visual nuances and in weaving character dynamics, especially that of between a mother and daughter. In a typical drama, the lack of self-awareness, on the part of primary character will be only used for comedy. But, it doesn’t happen here. Marnie Minervini isn’t just laughably embarrassing her daughter by meddling in matters; the women’s lack of self-awareness also shows her inherent loneliness and emotional pain. When Lori says to her mother that she needs a hobby, Marnie immediately replies “May be you could be my hobby”. We can pass a chuckle at this line, but an afterthought would make us empathize for Marnie because she is little exasperating in a way our mothers are. Susan Sarandon is the reason we root for Marnie. She turns a character which could be a stereotype into an archetype. Look at her go for nuanced emotions when other veteran actress would have gone for emotional fireworks. Susan Sarandon’s performance could be summarized as the gentle breeze that untethers the film from being a caricatured comedy. 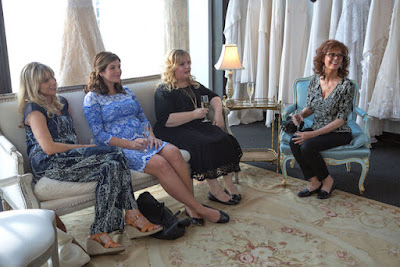 Director Lorene Scafaria, in her interview to rogerebert.com has stated that Marnie’s character was designed from her own mother, who moved to New Jersey after the passing of her husband. Getting a phone and the overly shiny surface emotions are something Scafaria has derived from real-life scenario. So from knowing where the director/writer has derived her story, it is easy to perceive on why she doesn’t cast a judgmental light on Marnie, Lori and their relationship. When they both are conversing they doesn’t say anything a mother-daughter, sharing a common grief, wouldn’t say. It is also good to see Scafaria not manipulating Marnie’s grief to make her talk to a hallucinatory vision of husband. Most importantly, we don’t see the tension between mother and daughter escalating to the levels of a verbal warfare. Like the beautiful tragicomedy scene, when Marnie mistakenly buys ovulation testing kit for Lori, instead of the pregnancy testing kit, their relationship veers between awkward laughs and frustrated tears. I mean, sharing a well-earned laugh and tear – how realistic can on-screen relationships be than this? The catharsis and closure isn’t always satisfying (it is necessary to satisfy audience, who seek closure for an on-screen crisis within 100 minutes) but that doesn’t take away the layers of excellence diffused in the narrative. The film conveys comedy and grief through well-timed cuts and eye fro details. I particularly liked the scene when Marnie gets together with her husband’s family for a lunch and the talk hovers around the topic she wants to avoid. The frame observes Marnie, placing the empty chair on the dining table in front, where Marnie’s husband used to sit, gracefully communicating the feelings of loss and grief.

Thanks to the three women (Susan Sarandon, Rose Byrne & director Scafaria) “The Meddler” (100 minutes) transcends few mawkish elements to become an earnest attempt in exploring the ways people deal with loss and loneliness. The narrative momentum isn’t maintained throughout, although it is good to see a film that doesn’t treat ‘meddling’ woman as a comedy track. Along with Paul Weitz’s “Grandma”, “The Meddler” should be watched as ‘double bill’ – both a richly performed character study about women above 50.