A Brief Introduction to the Cinema of 'Denis Villeneuve' 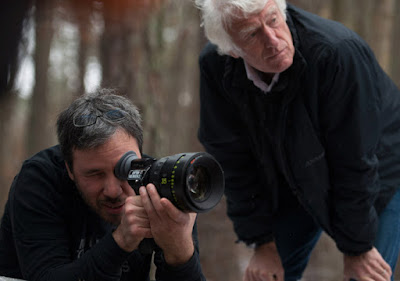 “My job is very fragile. There’s no insurance. I never know the next morning what I’m going to do. As long as they allow me to make movies there, I will. But it’s one movie at a time. I’m making every movie like it’s my last one, because you never know. I only believe I’m making a movie when I put my eyes behind the camera.”

I don’t believe in words that are alleged to be prophetic. But, I can’t stop wonder how apt the name was for the first film competition Mr. Denis Villeneuve decided to participate. It’s called “Destination World Race” aka ‘La course destination monde’. May be he destined to transcend national boundaries to make movies that raced around the world. Now let me not get ahead and make a myth out of Villeneuve’s staggering rise to be one of the important, contemporary film-makers.   Born on October 3rd 1967, in Quebec’s southern-side suburb, Trois Rivieres, Denis Villeneuve abandoned science major at college to pursue interest in film studies. He enrolled at ‘Universite de Quebec a Montreal’ and at 1990, he made his first documentary short with Stephane Thibault for ‘Destination Worldrace’ under the tittle ‘La Course Europe-Asie). This short movie series (1988-99) presented by Radio-Canada had participants traveling alone around the world to make 4 minute movies. On the year 1990, Villeneuve won the first prize in this competition. This early victory pushed him to make similar low-budget, minimal running time projects. In 1994, he wrote and directed his first short film titled “REW-FFD” (1994). In 1996, the budding film-maker got a meaty chance to direct a segment in anthology of short films called “Cosmos”. It was a showcase for young Canadian directors’ talent and Villeneuve made the tense segment titled “Le Technetium”.

In 1998, he decided to make his first feature film “August 32nd on Earth”. The film was about a woman named Simone, a fashion model, whose life goals changes when she miraculously survives a car accident. She is now obsessed in giving birth to a life (to have a baby) and seeks the help of her best friend Philippe. Despite bizarre nature of plot outline, this film was an impressive effort for a first time film-maker. It was a deliberately elusive work of a woman’s self-discovery (the remarkably arresting performance of Pascale Bussieres was another strong aspect). The film was also screened at 1998 Cannes Film Festival and received glowing reviews. The follow-up feature film “Maelstrom” (2000) was equally elusive and confirmed that Villeneuve is Canada’s burgeoning film-making talent.  The marvelous French-Canadian actress Marie Josee Croze played the central role of a depressed, substance abusing woman named Bibi, who falls in love with a man whose father she believes to have accidentally killed (a hit-and-run case). The bizarre & distinct aspect of “Maelstrom” is that it is narrated by a fish, waiting to be cut off on a butcher’s block. There was a narrative and visual maturity Villeneuve gained in this second film itself, which continues to marvel us till now.

Denis Villeneuve took a 9 year gap before the release of his acclaimed drama “Polytechnique”, based on the shooting at Montreal’s Poly-technique School on December 6th, 1989 which claimed the lives of 14 women. One of the prominent works Villeneuve made in his 9 year hiatus from film-making was the 11 minute short “Next Floor” (2008). Based on the original idea bestowed by Pheobe Greenberg, the place of action in this short film was a banquet table. There were quite a few moments in “Next Floor” we are left to watch the events unfolding with bafflement and an open mouth. It was a vivid portrayal of how over-consumption and uncontrolled appetites would forever take control of our senses. Villeneuve’s “Polytechnique” left out all the uniquely weird narrative & visual techniques to incorporate a very minimal, but powerful visual style. This film swept seven major awards (including Best Picture) at the Genie Awards – the Canadian equivalent of Academy Awards. Marc Lepine, the shooter at Poly-technique School, specifically targeted woman, noting down in a letter that woman (& feminists) had robbed him of opportunities to lead a better life. But, Villeneuve doesn’t turn into a poster boy for ‘feminism’ or shove in loud messages through ‘Polytechnique’. The way he visualized the impact of violence and how his frames lingered in many of the film’s distressing unspoken moments must be lesson for film-makers trying to portray real-life morbid events on-screen.

In 2010, Villeneuve returned with a tale of a woman tracking down her mother’s horrific past. It was the film you could say cleansed any doubts in the mind of movie-lover about Villeneuve being one of the excellent film artists. The film was titled “Incendies” and deemed to be one of the best films to come out of Quebec cinema. “Incendies”, in many ways transcended the set of limited themes dealt in Canadian films. It was said to be rare effort from a Canadian film-maker to transcend national borders or detach himself from national belonging, in order to make a universally acknowledged anti-war tale. The beauty of “Incendies” lies in the way of how Villeneuve diffused his favorite, pet theme of ‘female condition’ into this gripping drama. I mean, we usually see a wronged man gathering up the courage to face what undid him. In “Incendies” an old woman does that by compelling her daughter and son to make a trip across the afflicted past. But, unlike a wronged man’s usual cinematic intention to wreak havoc, this woman character doesn’t want to twist the knife inside. She just wants to obliterate the evil in a man’s soul by showing him unbridled love.  I never knew that a simple act of reading a letter at the film’s climax would provide to be such a cathartic, powerful moment. A letter to uproot the deafening silence [“I say that you story begins with a promise that will break the thread of anger”, what an unforgettable, resonating final words in the film!].

The great success of “Incendies” naturally gave Villeneuve the chance to be part of big-budget Hollywood productions. Most of the emerging film-makers by cutting corners often get crushed by the Hollywood machine. When “Prisoners” made in 2013 with star actors Hugh Jackman and Jake Gyllenhaal, I didn’t have much interest in it. It was the first time Villeneuve to not have female protagonist (script was not also written by him). Nevertheless, Villeneuve used the highbrow technical prowess of American movies to make a moderately profound and immensely entertaining crime/mystery. This film marked the director’s first collaboration with ‘Master of Light and Shadow’ Roger Deakins and musical composer Jonas Jonasson. Despite the intricate script structure, “Prisoners” was pretty much a whodunit thriller. A kind of film you don’t re-watch when its suspense elements is uncovered. But, thanks to Deakins and Villenueve’s technical mastery, this film could be re-watched just for those impeccable frames of menacing, rain-drenched, wintry landscape alongside the faces of grieving, furious men. May be it was Villeneuve’s involvement that vividly brought out the despair of women characters (played by Maria Bello and Viola Davis) due to male violence.

Before shifting to Hollywood to make “Prisoners”, Villeneuve was already embroiled in the making of twisted psychological thriller “Enemy” (partially based on Nobel Prize winning novelist Jose Saramago’s “Double”) with Jake Gyllenhaal. The film got released after “Prisoners” and got mixed reviews due to its hard-to-crackdown narrative and thematic structure. The mysterious nature of “Enemy” not lies in the set of activities done by characters, but it’s all entangled within symbolism, which doesn’t have much of the cinematic logic. “Enemy” tells the tale of a history professor Adam Bell leading a dull life, coming across a person who looks just like him. Bell’s obsession with the other person derails his life as well as that of the women close to them. Villeneuve uses the thriller framework in “Enemy” to metaphorically explore the twisted notions of masculinity (about how it finally hinges on the prospect of ‘sexually conquering women’). It is also a film about ‘self’ or inquires on ‘what makes an individual?’ If depicting the female condition, exploring the position of women in the society plus reflecting on the cyclical nature of violence are some of the director’s favorite themes, the other predominant theme in his films are the presence of some form of doppelganger or a dichotomy (which you could find in abundance in the works of David Lynch and David Cronenberg).

The duality is not just the usual cinematic good and evil one. The duality exist with in his protagonists – be it the obsessive, suicidal protagonists in his first two Canadian movies or in the loving-dad-embracing-violence characterization in “Prisoners”. Even wen Villeneuve doesn’t pen the script, he chooses to zero-in on this feature of dichotomy & duality. In “Enemy”, this theme was pretty much obvious, but it was subtly ingrained in the visuals of his poetic tale of evil “Sicario” (2015). Thanks to Roger Deakins, the duo once again designs an atmosphere that is drenched in dread and duality. You see that brooding aerial shot, moving through the landscape of one of the peaceful cities on Earth (El Paso, US) to one of the most violent cities in the world (Ciudad Juarez, Mexico), laying within few kilometers. With Johann Johansson musical score throbbing in the background, you get to witness one of the most visually complex scenes in contemporary cinema, as the American convoy from Texas passes Mexican border to escort a prisoner back to their country.

Apart from the elegant visualization of the geographical dichotomy, Villeneuve through Tyler Sheridan’s script, focused on the dualities existing within human mind. It’s an aspect in the narrative, which makes the actions of particular characters totally unpredictable. Both Emily Blunt who plays the protagonist Kate Mercer and the magnificent actor Benecio Del Toro keep their words to bare minimum and express their dual nature through remarkable emotions. With “Sicario”, Denis Villeneuve also once again got the chance to employ female characters as his protagonist (after “Incendies”). In an interview, Villeneuve stated that he was drawn to this script mainly because it featured a female lead (writer Sheridan was previously advised to change his lead into a male by Hollywood studios). Whenever you think about tale of drug cartel, you visualize men and their struggle against the ‘powers to be’. And, whenever we hear that a film has a female lead, somehow we grossly relate it to the bland term ‘chick-flick’. But, here is a sensible film-maker working within the reach of mainstream, trying to engage wider audience by infusing something potent and original female characters. Here is a film-maker traversing through different genres, Hollywood studios are throwing at him, but still he is able to make his own distinct path.

I am now eagerly waiting for his critically acclaimed hard sci-fi thriller “Arrival” starring Amy Adams in the central role (based on Ted Chiang’s novella “Story of Your Life”, which I tremendously liked reading). With the Blade Runner Sequel in making, Denis Villeneuve will be one of the most vital film-maker you got to watch out for in the next decade or two. He boasts the dream of adapting Frank Herbert’s hard-to-adapt sci-fi epic “Dune”. I think Villeneuve has the superior skills to succeed with such an adaptation (if it happens).

Here’s my personal ranking of Mr. Villeneuve’s films. It’s very much a subjective endeavor. So I hope that the commenters will convey your own ranking rather than decrying at mine.

F For those who have missed watching Villeneuve's marvelous short film "Next Floor":

A movie essay breaking down the tense 'convoy scene' in "Sicario"

Essay on the 'Convoy Crossing Scene' in Sicario