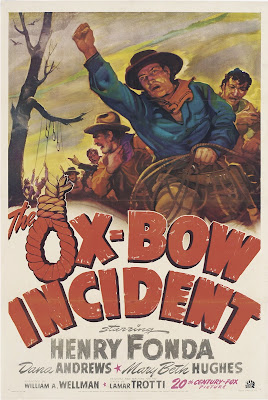 In 1936, acclaimed German film-maker Fritz Lang (shortly after fleeing from the Nazi authority to US) made is debut American feature “Fury”, which incisively dealt with mob mentality and collective human frailty as a potentially dangerous force. “Fury” tells the story of Joe Wilson (Spencer Tracy) wrongfully accused of kidnapping and later is persecuted by a lynching mob, which is driven by a local rumor mill. The kind man Joe barely escapes from the mob and goes through a transformation after coming across mass hysteria. The intense film ends up calling for more compassion to fight the frailty that feeds fascist ideals and mob-induced violence. Old Hollywood’s stalwart director William A. Wellman (“Wings” -- 1927, “The Public Enemy” -- 1931) took reins of adapting Tilburg Clark’s novel, which although set in the old Wild West, also examined the human weakness and loss of individuality, fueled by hysterical emotions. Both Lang’s “Fury” and Wellman’s “The Ox-Bow Incident” (1943) features a complex moral agenda and a timeless narrative that could be related even in this era of fear-driven American political and social consciousness.

Within the crisp 75 minute running time Lamar Trotti’s adapted script in “The Ox-Bow Incident” contemplates on the notions of authority, masculinity, the blurring lines between justice and vengeance. Although it starts off like a typical ‘Western’ genre film, it gradually turns into a ‘noir’ and acute social drama, condemning the irrationality of frontier justice. The dubious, hypocritical high-minded morality of the society is dealt in the main narrative as well as in the under-written sub-plot of Rose Mapen. The film starts with two cowboys – Gil Carter (Henry Fonda) and Art Croft (Harry Morgan) – riding into a small, near-empty town in Nevada, 1885. They are not strangers to the town and have returned after months of cattle-tending work. Gil is more exhausted and feels bad when hears that his girl Rose Mapen have fledged out of town. He starts up a fight with a local ranch hand Farnley (Marc Lawrence), when the guy makes an indirect allegation of Gil being a rustler (cattle thief). As the fight settles down and before finishing up the whisky shot, a man runs into town bearing the news of Larry Kincaid’s murder. The alleged homicide (committed by rustlers) of Farnley’s best friend and popular rancher brings together a posse, whose members intends to immediately lynch the criminals. 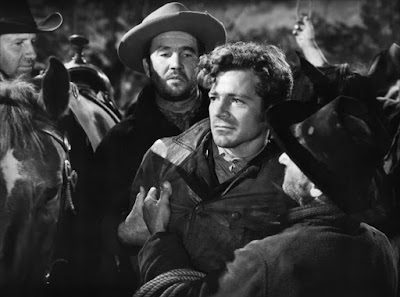 A genial store-owner Mr. Davies (Harry Davenport) and local judge, in the absence of town sheriff, serve as voice of reason. Gil and Art also join the posse, but they are well aware of how the men are wholly driven by vengeance. An old confederate soldier Major Tetley walks in with bluster carrying new information about the cattle thieves and alleged murderers. The major takes charge of the mob and brushes away the idea of legal justice as weak and feminine. The major also drags down his young, compassionate son Gerald, thinking that witnessing frontier justice would make a ‘man out of him’. Among the bored and aggressive men of mob, one memorable member is a boisterous woman Ma Grier (Jenny Darwell), who’s accepted by men because of showing masculine tendencies. Considering the racial overtones of the era, it is also surprising to see an African-American character Sparks (who’s one of the voices of reason and viewers stand-ins) treated with respect. In the dead of night, at a place called ‘Ox-Bow’, the posse catches up with three wayward men – Donald Martin (Dana Andrews), Juan Martinez (Anthony Quinn) and a senile old guy Harvey. The posse has enough reasons to suspect these three men as rustlers/murderers, but do they have enough proof to hang the three men on the spot? 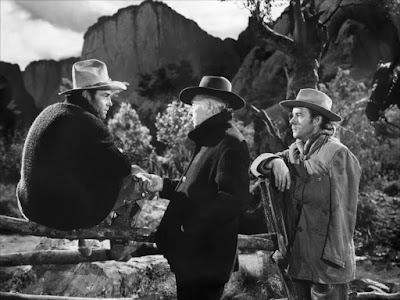 Despite starting off with farcical humor, director Wellman smoothly transitions the narrative to be a tense, profound drama. The character nature are simply established but the gradually grows upon us alongside the narrative intensity. Wellman’s staging in many sequences are brilliant and Arthur C Miller’s cinematography (won three Oscars in his career) has the resonating power to preserve the film’s powerful message in our mind, long after seeing it. Despite the studio-bound backdrops, the stunning black-and-white cinematography offers profound depths to the frames. There’s a great deal of dynamism in creating these beautiful, balanced images. The night-time visual tone perfectly reflects the men’s dark and twisted idea of justice. There’s that wonderful shot, where rays of sun glides through the trees to fall upon the condemned man, awaiting his gruesome fate. The entire ‘hanging’ sequence is subtly handled by Wellman and Miller, escalating our fear before delivering that one final blow (the shot as the man disperse and Sparks praying before the ‘tree’ was so emotionally affecting). However, the one phenomenal shot in the film comes at the end, when Fonda’s Gil Carter reads Donald’s letter to his wife. The weightiest scene has marvelous close-up shot, which conceals Fonda’s eyes (I know this shot conveys something deep, although I can’t pin-point an exact meaning). If the film form is near perfect, the narrative brims with significant sociopolitical context. 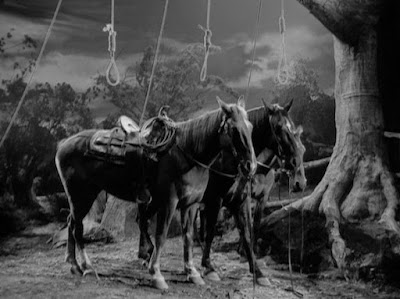 The script forces us to bear the weight of having to make a ‘life’ or ‘death’ decision, which afflicts the rational men in the posse. As few of the plot’s generic conventions paves way to examine the characters’ depraved behavior and their eventual moral enlightenment, we are left to observe the central irony: men and women trying to maintain law and order through criminal behavior and creating more chaos. Modern audience may prefer that haunting silence in the end than the summation letter, but still the words in that letter only stresses over the timeless message without being bland (“Law is a lot more than words you put in a book, or judges or lawyers or sheriffs you hire to carry it out. It's everything people ever have found out about justice and what's right and wrong. It's the very conscience of humanity. There can't be any such thing as civilization unless people have a conscience, because if people touch God anywhere, where is it except through their conscience?” says the thoughtful passage). Henry Fonda’s character Gil is sensibly written as a morally ambiguous man, caught in the middle of talks between legal justice and frontier justice. It is a good moment when the character literally leaps across to choose over one side. Sparks, Gerald and Davies are left to serve as the narrative’s moral backbone, whose characters are fully developed without providing any backstories (the actors playing these parts also give a marvelous performance). “Ox-Bow Incident” is a kind of early anti-western movie as it questions all the ‘Western’ genre elements (chiefly the unchecked masculinity). May be that’s the reason for this film getting lukewarm critical and commercial response, unlike other classic, landmark Western movies like “Stage Coach” (1939), “High Noon” (1952), etc.

“The Ox-Bow Incident” (75 minutes) is a powerful and thought-provoking film on the human frailty and callous, unreasonable nature of vigilante justice. Its sociopolitical message will remain relevant whenever our fellow humans make moral compromises to devour like rabid dogs.

Coming to your blog for the first time. I appreciate the sheer research, detailing and effort you've taken to make this post. Will be back for more later. Kudos!