Hunt for the Wilderpeople [2016] – A Warm and Rollicking Journey 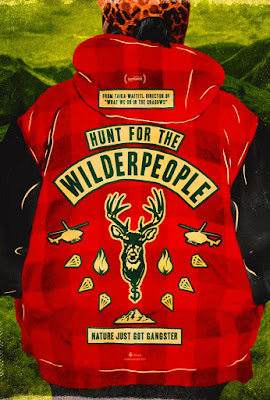 The joys and pains of being a misfit is the central theme of New Zealand film-maker Taika Waititi’s beguiling comedy/dramas. Waititi, son of a painter, had drifted between creative professions of acting, photography, writing, music, and finally settling on directing. One of his early short films “Two Cars, One Night” (2005) earned him an Oscar nomination. He soon launched his directorial debut “Eagle Vs Shark” (2007), casting fellow New Zealand comedian Jemaine Clement (known for TV series “Flight of the Concords”) as the socially awkward protagonist. It was a wry comedy with a tone that’s similar to Jared Hess’ “Napoleon Dynamite”. He followed it with sharp coming of age tale “Boy” and then collaborated with Clement to make the energetic vampire mockumentary “What We Do in the Shadows”. The nuanced comedy, showcasing the odd-ball vampire's slice-of-life gained cult standing among the fans of this sub-genre.  Waititi’s latest venture, based on Barry Crump's book 'Wildpork and Watercress', titled “Hunt for Wilderpeople” (2016) is a much more sophisticated film in terms of budget & visuals, as he confidently breathes in an eccentric rhythm. The tone undulates between smashing comedy and sensitive drama. Although the tone isn’t perfectly balanced at times (as it becomes too goofy for its own good), the marvelous audiovisual elements plus a fantastic cast transforms this film to be one of the best feel-good movies of the year.

The film opens on the greeny mountainous New Zeland landscapes and an arousing choral chant fills the soundtrack. A police car cruises through the rugged terrain and we see the glimpses of character sitting on the back seat of police vehicle. The car stops at a farm and the camera slowly introduces the hero of this tale: a troubled 13 year old pudgy boy Ricky Baker (Julian Dennison). The comically stern social worker Paula (Rachel House) with a interpretative motto “No Child Left Behind” drops off Ricky at the latest in a long series of foster homes. She warns the new foster mother Bella (Rima Te Wiata) about the assortment of mischief the boy is capable of. Bella bestows unconditional love on Ricky, which pales in difference when compared to her husband Hec aka Hector Faulkner (Sam Neill), an illiterate, cantankerous bushman. The stoicism Ricky gained by getting ricocheted from foster home to another, breaks up in front of Bella’s compassion. The childless ‘aunt’ lets Ricky run away, climbing the steep hills, close to the farm and advises him to be back for breakfast. Ricky has acquired the taste for hip-hop music. He is embroiled with pop psychology that his ambitions are to become a ‘gangsta’ as he already feels like an outlaw. 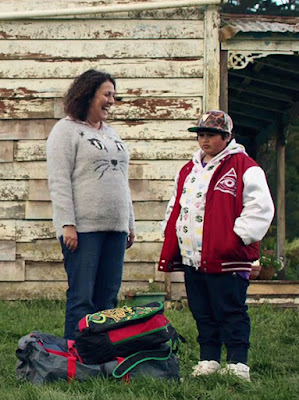 Bella has outfitted Ricky’s room with variety of books, a hot-water bottle and toy animals. They both bewilderingly observe each others' talents. Ricky has the knack for saying expressive haiku – like ‘Kingi, you wanker’, while aunt Bella flaunts her butchering knife to slaughter a wild pig. The boy slowly comes out of his shell after aunt gives the first birthday present he ever received: a farm dog which Ricky names ‘Tupac’. Hec just keeps his distance, answering in monosyllables or just glowers. However, the prospect for Ricky achieving a steady life is prematurely killed with a sudden tragedy. The ensuing events make Ricky and Hec to run into the hills. The duo end up camping in the bush for a longer time than intended as a simple misunderstanding turns them into fugitives (a crazy national manhunt is set off and news media concocts their own version). The misfits argue about several things from poetry to processing difficult emotions. The adventure makes them to meet up with charming individuals like a chatty teenage girl (Tioreore Ngatai-Melbourne) and madcap ‘Psycho Sam’ (Rhys Darby). 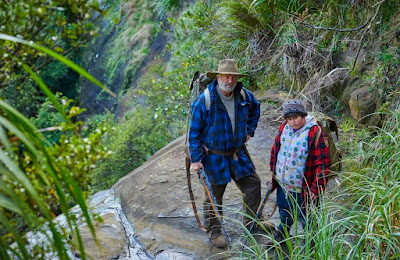 Waititi’s movies strike a chord with us because of his emotional honesty that withholds existence’s fuller spectrum of joy and tragedy.The mixture of distressing elements alongside humor is achieved with a delicate emotional balance. The other vital ingredient of Waititi’s stories is the New Zealand brand of humor, which like the Eastern European humor designs comedy out of the mundane, boring life elements. Director Waititi’s deadpan montages are perfect example for his trademark dry comedy (which also reminds us of Edgar Wright’s visual comedy style). While he finds room for compassion and humor in the grimmest of scenarios, the director never belittles or caricatures the characters. The absurd humor which raises the misfit characters’ falsified notions do get a bit tiring or repetitive, but we don’t loss the well-crafted emotional connection. Waititi often kind of over-writes things which makes certain comedic exchanges as part of some other unrelated skit. For example, there’s a sequence where Paula and Ricky argues about their likeness to ‘Terminator’. But, what keep the film from straddling too much are the taut visuals. You may not need an introduction about the picturesque, ‘majestical’ landscapes of New Zealand, although what need to be mentioned are the innovative visual gags. In the montages, we see the camera moving from left to right, unfolding all the actions happenings in the dense forest. The movements in time and space are merged with a single shot. It’s as old a method as in the 360 degree photographs, but here the visuals well serves the narrative as the moving frames are diffused with little gags. The astute direction also helps in the emotional scenes. While the writing calls for over-the-top sentimentality, the camera sensibly keeps a distance. Look at how Waititi frames the film’s most tragic moment. He only uses a medium shot and obscures the crying face from our view. Then, there’s the fire-camp scene, when the shot lingers on Ricky’s face as he uses cryptic words to convey the tragedy that befell on his best friend Amber. 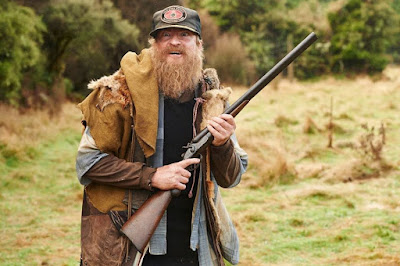 Waititi’s extended scenes of absurdist chases didn’t engage me very much, but the comedic gold, in terms of writing is the episode involving Darby’s ‘Psycho Sam’ aka ‘Bushman’. He adorns his head with tin-caps to stop government guys infiltrating his mind, since his aspiration is to love outside the world of ‘form-fillers’. Of the recurrent themes Waititi explores, the most I like is the way he treats hyper-masculinity (“I come from a country whose idea of masculinity is quite extreme and I've grown up around a lot of that energy, I've been part of that a lot. And it's very draining, it's quite tiring trying to be macho” says Mr. Waititi). It’s shown as contortion of reality and as a toxic fantasy. Ricky fancies a thug life (aka skux life) to forge a career in drug-dealing and to eventually have a Scarface-style shoot-out. While in reality, he is not capable of being that worst or emotionally insensitive. This central conflict is etched with a fine dose of humor in Waititi’s previous three features too. It’s also commendable to see a modern day comedy that relies less on crudeness or insult. Of course, there are few ‘fat’ jokes, but they are like good-natured poking rather than being a cruel blow. The performances aren’t certainly polished, although it’s definitely touching. Dennison does a fine job of making Ricky likeable as well as little annoying. He is really good at tapping onto Ricky’s profound emotional depths. It’s been a long time since we saw such a warm, understated performance from Sam Niell.

“Hunt for the Wilderpeople” (101 minutes) is an amusing and poignant adventurous tale set in New Zealand’s hinterlands. ‘I watched Ricky’s skux life/ it was majestical/ I loved it’ (thanks for bearing my own haiku).

at September 27, 2016
Email ThisBlogThis!Share to TwitterShare to FacebookShare to Pinterest
Labels: 2016 Movies, Feel Good Movies, Films from 'Down Under'