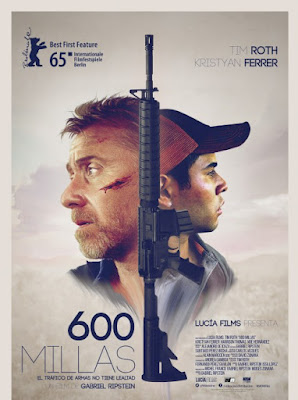 Organized crime in the borderlands of Mexico and US remains as a well spring for contemporary crime cinema, where the ‘right’ thing is done by a ‘white savior’. While films like “Sicario” takes a hyper-realistic approach to examine the intricate web existing between US and Mexico in the booming crime business, most of the American cinema likes to pin the blame on their impoverished neighbors. Mexican film-makers often take a matured approach in dealing this subject, addressing the complex co-responsibility between the two countries in cartel-related activities. Gabriel Ripstein’s feature-film debut “600 Miles” (2015) takes a peculiar look at organized crime in a lean, non-glamorous manner. It is small in scale and has a very narrow scope with no big on-screen moments (the film was featured in the prestigious Panorama section at last year’s Berlin Film Festival and won the ‘Best First Film Award’). Almost entirely shot with a handheld camera, “600 Miles” is a character study about two small cogs with a menial job, getting caught up in the illegal trade web. One is a Mexican teen (Kristyan Ferrer) smuggling weapon from Arizona to a drug cartel in Mexico; the other is a desolate ATF agent (Tim Roth), who is assigned to monitor the gun traffickers (not to stop the gun-flow).

Director/producer Gabriel Ripsten, son of the acclaimed director Arturo Ripstein (“The Castle of Purity”) and grandson of Alfredo Ripstein (known as father of the Mexican film industry) shuns the typical, lurid conventions to offer a thoughtful rumination on the disentangled relationship between American bureaucrats and Mexican links in the organized crime. In Mexico, it is illegal to buy firearms, while across the border there’s a strong appetite for procurement of guns. In the film’s opening scene, we see a white delinquent teen (Harrison Thomas) with a violent streak and a profound knowledge about guns asks specific questions to a guy in the gun store. As the white teen buys powerful, military grade firearms (after filling out all detailed forms), Arnulfo Rubio, the young, low-level Mexican gun runner waits in the car.  Arnulfo drives around, keeps the accounts straight and counts the money, whereas the less stable white guy is just full of bluster. Since Ripstein’s film shows little interest with plot details, what we get are pointed observations, like the one where a request for ID comes for the cigarette packs and not for the boxes of ammunition. Amidst the islands of those pointed observations, what we get for a narrative is a slow, meandering process which either introduces a new facet about characters or perilous crime journey. 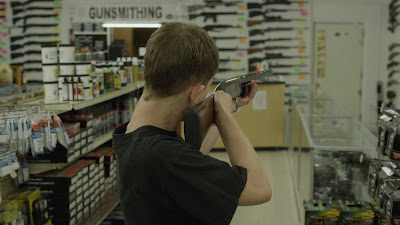 Arnulfo goes through waves of conflicting emotions as he is keen to climb through the cartel. As we in other Mexican films or films about Mexico, the concept of family comes first. But, Arnulfo is only alienated in this social environment, as he is in constant search for a father figure and there’s no dynamism in his relationship with mother. Director Ripstein’s camera only follows around the characters and so when Arnulfo is stuck (literally & figuratively) in the surroundings, the frames doesn’t artificially try to create dynamism. Tim Roth’s Hank Harris, the ATF agent [U.S. Bureau of Alcohol, Tobacco, Firearms, and Explosives] is the perfect companion for Arnulfo in the unforeseen journey across Mexican border. Hank looks more introspective and world-weary than Arnulfo. One of the great qualities Roth instills in to Hank is the believable level of empathy and compassion. Hank has been the look out for Arnulfo and his buddy, following up their gun-store purchases. In one particular moment, Hank confronts Arnulfo and is about to make the arrest, when the white kid jumps on him, kicking him to near death. The scared Mexican teen just bundles the injured American into his truck to drive him into Mexico and determined to consult his bosses. The young Mexican also thinks that the American help the cartel with their business by passing on some valuable information. But, mostly Arnulfo doesn’t want to kill Hank because he feels a strange kinship with the American; especially after hearing that Hank is as lonesome as he is (Hank tells that his wife is dead when Arnulfo gives him a chance to call any family member). 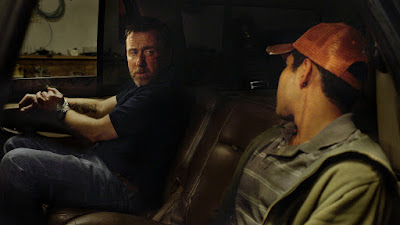 It was immensely satisfying to watch Arnulfo and Hank warming up to each other, despite their different backgrounds. As they both help each other and make meandering, small talks, “600 Miles” gradually becomes an intense road movie. We are so manipulated to empathize with both these guys that we also begin to wonder about the realism behind such a journey. In fact, it is a clever manipulation on the part of Ripstein and his co-writer Issa Lopez to make us feel for both the central characters, so that the sudden ending provides the perfect, emotional whiplash. Director Gabriel Ripstein throughout the narrative makes us see what he wants us to show (the budding friendship between Mexican and American), only to take a brutal U-turn in the end, to make us think of the distressing truth that actually aren’t shown on-screen. We are left to figure out the truth, buried beyond the images and words, we saw & heard throughout the journey. Neither the fateful journey nor its bitter denouement is so refreshingly new. However, the commendable factor is Ripstein’s demystified, narrow frames (cinematography by Alain Marcoen), which solely trusts the two actors to diffuse profound textures into the characters (and the actors have done a glorious job). The bodies left in the wake of precarious friendship between innocent Mexican and experienced American becomes a perfect allegory for the inextricable relationship between the two countries (in the organized crime arena).

Those who have less patience to take in the simple images and static shots would find “600 Miles” (85 minutes) as a very boring movie. But, I was thoroughly engaged by this modest but sincere, low-key drama. The simple, static image at the very end remains as the film’s most powerful, unforgettable image. And, in this image what you see is just an American having an all-American breakfast, exhibiting the typical all-American indifference.