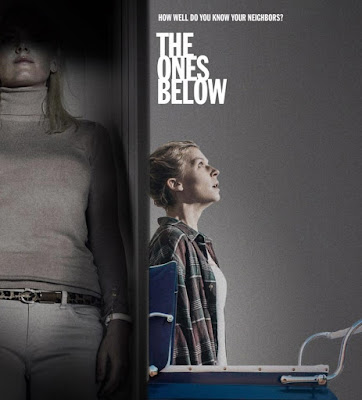 The weird anxiety and alienation that comes along during the early days of parenting could make up for a menacing psychological drama. Add a deceptively genial outsider or neighbor, whose objective is to widen the cracks in relationship during the dejected days of early parenting. Now you can have a cracking psychological thriller. The perfect use of confined literal space and emotional space could turn the story into something in the vein of Hitchcock thriller. If the flawless visual language of such a film-maker is interested less in main-stream resolutions and wants to just pose thought-provoking, relatable questions then the tale has chance of becoming as great as a Haneke’s movie. British playwright/screenwriter David Farr’s directorial debut “The Ones Below” (2015) makes perfect use of color schemes and the claustrophobic space to bear the markings of a good psychological thriller. The antagonist is often cloaked in yellow to indicate her misleading surface nature – full of optimism and brightness -- and the real, inward qualities of an aggressive animal.  The muted colors of upstairs apartment, where the film’s protagonist stays, and the garish colors in the downstairs apartment plus that big, glass window looking into the downstairs flat’s garden shows how much the director and cinematographer has relied on well construed, traditional visuals to increase tension rather rely on cheap elements. Clemence Poesy plays the central character and she displays an amazing intensity to play an emphatic, inward person. Despite all those good things, there’s a banality built-in to such psychological thrillers, like the inevitable anticlimactic ending or the so-called ‘twists’. But, what turns “The Ones Below” into a ‘watchable’ thriller (and not a good thriller) is not just the presence of banal elements, but an unpardonable breach in logic and very inorganic character transformations.

Parents-to-be Kate (Clemence Poesy) and Justin (Stephen Campbell Moore) are the attractive, privileged couples living in a plush upstairs, situated in a lovely London suburb. They both have a vaguely defined job and Kate has some unresolved feelings with her mother Tessa. An old picture of Kate, her now deceased brother and distracted mother indicates that Kate has had a distressing childhood with her then mentally-sick mother. If you have seen enough thrillers on this theme, you would have guessed by now that this small detail would play a large part in the film’s third act. The long vacant downstairs apartment is suddenly occupied one day. Kate and Justin are curious about them and think they must be rich, especially after looking at the way the newcomers have re-modeled their backyard garden. The rich downstairs neighbors –Theresa (Laura Birn) and Jon (David Morissey) are also expecting a child. Character wise, Teresa and Kate are totally opposite, although the pregnant ladies develop a good friendship, so as to make Kate invite Teresa and her husband (a tough-looking, investment banker) for a dinner. 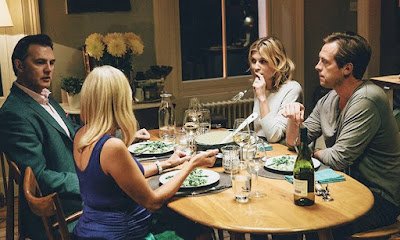 The film could be watched just for that dinner scene, marvelously staged with uncomfortable close-ups, abrupt questions and troubling silences. Jon announces that Theresa has stopped drinking due to pregnancy, although when Jon looks aside, she drinks quite a lot of wine as Kate watches with a baffling look. Despite trying to find some common ground to talk about, the couples’ opinions (from motherhood to every other thing) only make the differences glare. Soon, Theresa has a tragic accident as she fells down the stairs (loses her baby). It may have resulted due to quite a lot of drinks she had or because of that cat (Kate’s) jumping from nowhere, scaring the wits out of Theresa or she might have stumbled due to the footwear left outside. May be it’s a combination of all these things. But, Jon and Theresa place the blame totally on their upstairs couples. “You don’t deserve the thing inside you, you c**t”, says embittered Theresa to Kate. But, soon the downstairs couples call upon a truce. They send an apology letter, stating that they won’t be back for few months (at least until Kate gives birth to her child). Theresa and Jon come back from their mourning period as warm-hearted neighbors. But, as you can guess everything goes to hell for Kate and Justin. 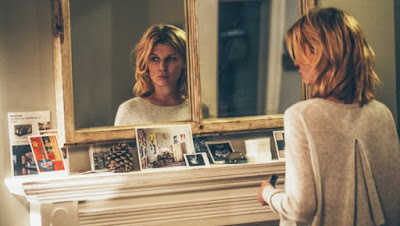 “The Ones Below” is at its best when it tries to be less generic. The nicely built tension in the dinner scene, the subtly intimidating nature of Jon, the well-meaning attempts by Kate to be polite, the sleep deprivation and the paranoia, loneliness attached to parenting are the narrative’s relatable and genuine moments in the film. What could be more dreadful for a parent, holding screaming baby in the middle of a night to make a trip to hospital and come back, only to find no parking space? The narrative is good when it uses everyday objects –car-alarm -- to pervade a chaotic atmosphere. But, David Farr doesn’t use these genuine, personal moments to sustain the tension and paranoia. The writer/director slowly and finely builds up the characters, only to inorganically transform them for the sole purpose of teleporting ‘twists’. He often goes for the generic elements, like the worn-out ‘women-has-gone-crazily-paranoid’ idea. While Farr shows immense promise in the way he tries to evokes the visual brilliance of masters like Polanski and Hitchcock (cinematography by Ed Rutherford), his screenplay derives too much of the cliches from the ‘paranoid-thriller-handbook’. The performances are uniformly excellent. As Clemence Poesy passes off the palpable sense of unease, Laura Birn convincingly plays the malevolent woman with lustrous surface emotions (the character would definitely make you want to punch her teeth in).

“The Ones Below” (87 minutes) is a watchable domestic thriller which feels stilted due to the inclusion of potboiler elements. Poesy’s performance and director Farr’s assured frames stop it from becoming a totally banal venture.