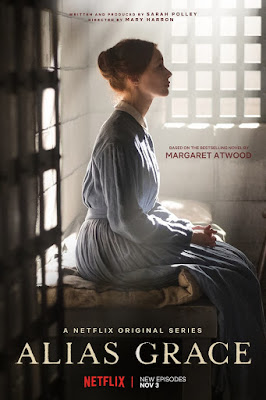 As a film-maker, Canadian actress Sarah Polley is predominantly attracted towards works that explore the slippery slopes of memory and fantasy. Polley’s deeply immersive debut Away from Her (2006), her audacious second film Take this Waltz (2011), and stupendous auto-biographical documentary Stories We Tell (2012) recurrently touched upon the themes of long-term relationship and how it could change a person’s perception of life, including love and sex. The narratives are perfectly perched to scrutinize the characters’ reality and imagination, unreliability of memory without ever losing its ambiguity. At its best, the three meditative pieces are soulful study of female restlessness or the deep female desire of re-inventing self-identity in a society that demands them to rigorously confirm to the preconceived gender roles. One of Polley’s dream projects has always been to adapt the celebrated Canadian novelist Margaret Atwood’s 1996 historical fiction Alias Grace.

The novel is about Grace Marks, a 19th-century Irish-Canadian servant who at 16 years of age allegedly helped to murder the housemaid and owner of the farm where she worked. Thirty eight year old Sarah Polley read the novel at the time of its release (when she was 17) and naturally as a famous young actor with no mother she instantly related to the plight of the celebrated murderess. The novel chiefly examines the rift between the image Grace projected of herself and the image others had about her. Sarah Polley, who had played her first serious adult role in the same year in Atom Egoyan’s The Sweet Hereafter, was also gnawed by the state of flux in self-identity. Polley’s later-day heroines (including her own mother in Stories We Tell) were born from this relentless search for the self. She had sought for Alias Grace' movie-rights back when she was eighteen. After two decades, Polley’s dream project was realized in the form of TV mini-series (with the help of Netflix) with a top-notch ensemble cast (which includes the great Canadian director David Cronenberg). However, Sarah Polley restricted herself to writing and producing duties and passed on the directorial torch to fellow Canadian director Mary Harron (I Shot Andy Warhol, American Psycho). 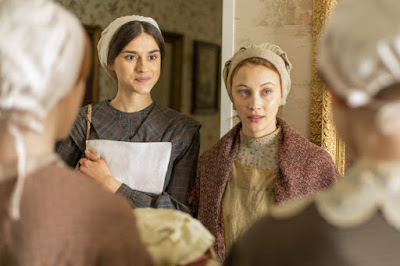 Director Harron perfectly marriages Atwood’s piercing yet equivocal prose with visceral images that’s entirely devoid of romanticized nostalgia of the Victorian Era. Furthermore, Alias Grace is the second Margaret Atwood adaptation of the year, following the Emmy Award-winning The Handmaid’s Tale, a dystopian sci-fi series whose arrival is seen timely for the current American political climate. Similarly, Alias Grace, although one of least adaptable novels of Atwood, is also a relevant tale which reflects upon the buried feminine rage. The mini-series unfolds between mid and late 19th century, the time when the fairer sex are expected to affirm to the standards of utmost femininity. Seen from a female perspective and that too from an immigrant female perspective, the era despite being bathed in warm hues looks horrifying and the well-spring of unspeakable abuses. Alias Grace opens with the close-up shot of protagonist Grace Marks (Sarah Gadon), in her early 30s, cloaked in grey-blue top, head covered by a white-bonnet and her beautiful grey-blue eyes’ incisive gaze switches from one expression to another, according to the rhythm of her inner narration and thoughts. Grace’s voice-over narrates, “I think of all the things that have been written about me…that I am of a sullen disposition with a quarrelsome temper, that I have the appearance of a person rather above my humble station……..that I am cunning and devious, that I am soft in the head and little better than an idiot.” Truer to her name, she is as graceful in conducting herself which wholly contradicts the accrued label of ‘celebrated murderess’. 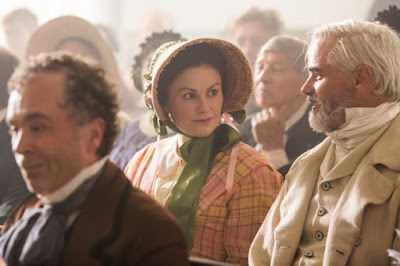 In 1843, 16 year old Grace Marks, who emigrated from Ireland to Canada, is convicted of murdering her employer, Thomas Kinnear (Paul Gross), and his housekeeper Nancy Montgomery (Anna Paquin). Grace is handed-down a life sentence and spent most of her prison life at Ontario’s Kingston Penitentiary, apart from the brief excruciating stay at a mental asylum. In 1858, Dr. Simon Jordan (Edward Holcroft), a practitioner in mental health issues is brought to examine Grace Marks by an empathetic reverend (David Cronenberg) who hopes to exonerate Grace based on the doctor’s report. Although, she has confessed at the trial, Grace says she only vaguely remembers the details of the murders and that most of her confession is engineered by the lawyer. Grace works at the Governor’s house, next to prison, in the day and is exhibited as an oddity to elevate the curiosity of upper-class women. Later, Dr. Jordan begins conducts his session with Grace at the governor’s house. She sits in a straitlaced posture, her hand weaving a quilt as her mouth weaves a personal tale of oppression and abuse.

There’s a sense of power and potency in the way Grace recollects her story, starting from the calamitous journey from Ireland to Canada. It’s as if the prolonged years of loneliness and emotional detachment at the prison had given her all the time to weave the perfectly balanced story. The young woman’s life history is riddled with traumatic experiences and tragedies. Every man in her life – from alcoholic father to the rich employer to the servants and asylum workers and police – has either desired or directly molested Grace. She remarks that one of the duties of being a maid is to avoid the advances of gentlemen. One of the significant event which has haunted Grace for years is the terrible death of her beloved, energetic friend Mary Whitney (Rebecca Liddiard). Through the meticulously detailed recollection of the past, she earnestly elicits the knight-in-the-shining-armor tendencies of Dr. Jordan. On one hand, Dr. Jordan (and we the viewers) wonders whether she is sincere or highly manipulative, while on the other hand he is increasingly besotted by her matter-of-fact narration and projection of sexual purity. Gradually, the series expands beyond the questions of ‘who is the guilty party’ or ‘what is the truth’ and rather explores how Grace intends to shape herself to live in the Victorian world where men process women through the image she showcases or suggests. 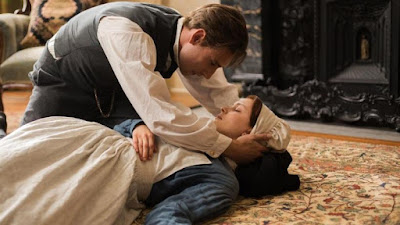 Alias Grace moves with subtle, restrained frequency which may frustrate viewers seeking a thrilling true-crime story. The mini-series is basically a hushed exploration of the themes of sexual abuse, objectification of women, white male privilege, etc; a lot of which seems as sadly relevant as it was in the 19th cenutry. The tale also jibes at the way we are programmed to judge women and doubt their inner feelings as deceitful (Polley’s Stories We Tell is also about the way we judge a person through others' collective memory). From the stylistic and writing viewpoint, Mary Harron-Sarah Polley team takes its time to unfold the narrative, emphasizing on each details. Harron’s framing devices shows fine restraint in depicting the brutal violence. I particularly liked the disorienting close-up shots of the doctor and Grace in the long-session, depicting how they occupy a different world. Gradually, as the session livens up, we see more of the shot-reverse-shot and mid or long-shots of them both in a single frame. Yet, Harron constantly hints at the impregnable barrier between them, probably due to the image they both strictly adapt which is partly thwarted when the doctor dreams of intimately cajoling Grace.

Ultimately, the series wholly rests on the shoulders of brilliant actress Sarah Gadon. Her facial expressions often carry a blankness which pushes us to project our perceptions on Grace Marks. The performance is so attuned at times that it’s hard to say if her words and gestures suggest good-intentions or pure malice. That uncertainty is what’s so fascinating and thrilling about her acting. The mini-series does seem to culminate with a satisfying solution, if not one beneficial to Grace Marks. However, if looked closely the ending is unmistakably grim. Grace is free from the bars of prison but at the same times she is domesticated by a land-owner (an old friend) who eagerly listens to her painful past and secrets before possessing her body. The question of whether Grace will ever be allowed to assume control of body and mind still hangs in the air. And, only a resounding chorus of no arises from deep within our conscience. Eventually, Alias Grace is a piercing tragedy about two women (Grace and Nancy) diffused with hate and fear by the unforgiving societal order around them. It’s a slow-burn and ponderous drama compared to the other Margaret Atwood adaptation (Handmaid’s tale) which was much-expansive and openly incendiary.