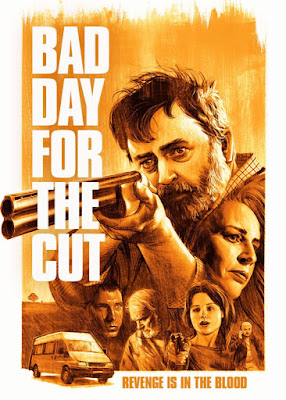 Irish film-maker Chris Baugh’s engaging revenge thriller Bad Day for the Cut (2017) immediately brings to mind the pragmatic, ominous and fascinatingly low-key indie films like Shane Meadows’ Dead Man’s Shoes (2004) and Jeremy Saulnier’s Blue Ruin (2013). The subject of revenge may be a well-trodden one, but when presented with panache and compelling characters, the path towards mayhem and murder will turn certainly bring forth solid genre entertainment. While Bad Day for the Cut isn’t as tightly packed and fully gratifying as Blue Ruin or other superior British revenge flicks, it elicits enough emotional investment to keeps us intrigued till the end. The idea of inescapable cycle of violence instills the narrative with certain hard-hitting notes, in the vein of bloody Korean thrillers.

The film starts off as a simple social realist drama that could have been cut from the same cloth as Lenny Abrahamson’s Garage (2007) or the recent acclaimed drama The Levelling (2016). Reticent, middle-aged farmer Donal (Nigel O’Neill) lives at his small Northern Ireland farm with his old mum Florence (Stella McCusker). He’s happy to restrict himself to the confines of the farm and limit his social life with a daily visit to the pub or repairing some old cars. A local man sells Donal a slightly battered camper van in exchange for some auto-work. He fixes it up and paints it in bright red and hopes that he would take the wee adventurous trip to the beach with old Florence. Soon, Donal sets upon a crossroads journey but without mum. One night, he wakes up in the camper van to his mother’s screams and finds her dead in the living room. He fleetingly sees a man getting into a car. The police and neighbors think of it as a botched robbery. Immediately after the mother’s funeral, Donal is visited by two masked tough guys. They take him to his garage and attempts to kill him by staging his suicide (by hanging).

A glaring mistake costs the life of one tough guy and the other one just turns out to be a frail, scared Polish boy named Bartosz (Jozef Pawloski), who’d been blackmailed to finish off Donal in order to free his sister Kaja (Anna Prochniak) from the human-trafficking gang. The situation leads to a darkly comic and relentlessly violent journey as Donal and Bartosz first sets off to Belfast. The mission is to save the girl from the gang’s den and also avenge them for mum’s murder. However, it doesn’t turn out to be that simple. For one, Kaja isn’t at that particular place and since she is sold for sex, only the gangsters know under which nickname she is operating. And, most importantly the murder of Florence doesn’t happen to be a mere accident. The ruthless boss of the trafficking syndicate Frankie (Susan Lynch) has deep personal reasons for the slaying. She says Donal’s mum isn’t as saintly as he believed to be. Nevertheless, Donal is determined to bring down the criminal queen and save the victimized Polish immigrants.

Chris Baugh and Brendan Mullin’s script maintains a sense of sardonic humor and diffuses credibility in the way the action on-screen unfolds. The opening scenes are pitch-perfect which makes us root for Donal even though his good-hearted nature is gradually taken over by his blood-lust. The duo keeps looking out for the absurdity in the scenario rather than just stage the actions in an adrenaline-rushing manner. For example, the scene they interrogate the local crime boss in the woods or when Donal goes to rescue Kaja and retrieve some key information in the process. Subsequently, the violence here is absurd and messy, not cathartic as witnessed in traditional revenge-thrillers. Of course, this non-conventional way of scrutinizing the theme of revenge has been expertly done in the indie films I mentioned earlier. Bad Day for the Cut is definitely riddled with a sense of urgency and necessity. And there are brilliant dead pan moments, especially in the interplay between Donal and Bartosz. But I didn’t for a minute buy the basic revenge set-up. A middle-aged woman taking pains to forge meticulous plan of revenge for a father she lost when she was five years old? No, the entire IRA backstory doesn’t have any credibility or plausibility under the closest of scrutiny. Susan Lynch whom I had mostly seen in benign or sympathetic roles (The Secret of Roan Inish, Waking Ned Devine) makes a fine attempt to channel her inner-Gary Oldman. But the character is often reduced to slamming, shouting and thumping that it becomes very one-dimensional. But still Chris Baugh’s adept direction and Nigel O’Neill exemplary performance as the flawed vengeful man (has a great knack for deadpan deliveries) provides solid genre thrills. A little suspension of disbelief is necessary to move through the second-half and Baugh rewards us with an unexpectedly lyrical as well as distressing finale.

Despite certain conceptual flaws in the narrative, Bad Day for the Cut (99 minutes) is a fairly entertaining off-beat revenge thriller. It diffuses strong emotional inclination to the proceedings which brings a more measured perspective to the destructive cycle of violence.