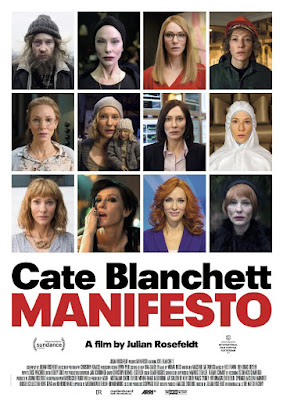 German gallery artist Julian Rosefeldt’s Manifesto (2017) originated as a multi-screen video art installation at the Australian Centre for the Moving Image (Melbourne) in 2015. The installation consisted of 13 giant screen spaces, where actress Cate Blanchett’s diversely accented voices recited extracts (in 10-minute video) from the seminal, incendiary texts that largely shaped artistic, cultural, and political ideologies of the Western nations in the 20th century. From Karl Marx and Fredriech Engels’ 1848 Communist Manifesto to Lars Von Trier’s Dogme 95 at least 50-60 significant manifestos or declarations are clubbed together under 12 distinct scenarios or themes. Cate Blanchett ptakes a different, extremely challenging avatar in each scenario. The actress’ tour-de-force performance along with Rosefeldt’s meticulous and contemplative observation of each man-made environment keeps the experimental feature vibrant and highly fluid.

Shot over 12 days, the 100-minute 12-segment movie stages each of the proclamations in an idiosyncratic, if not slightly absurd, setting. In the opening sequence, there’s a gorgeous drone aerial shot of a dilapidated industrial premise. The camera moves slowly, accompanied by a voice-over, before focusing on Blanchett who plays a homeless man ranting the words of Karl Marx. A mourner at a funeral quotes from Dadaism (the subversive ‘No More’ declaration); a tattooed & cynical British rocker throws around ideas of Creationism; a CEO at private cocktail party reciting excerpts from Abstract Expressionism; a master puppeteer pulling the strings of a puppet to patter on Surrealism and so on. Apart from the funeral speaker scenario, my most favorite one is the ‘Conservative mother’ scenario [Pop Art]. A housewife, her husband and three children sit at a dinning table, spread with a sumptuous feast. She starts saying grace which happens to be ‘I Am for an Art’ manifesto by American sculptor Claes Oldenburg. The ‘grace’ is inter-cut couple of times with other scenarios since it’s a very lengthy one, and the sheer absurdity of the situation is absolutely exciting. As the grace comes to an end, the camera roves through the opulent house revealing the bizarre collection of stuffed animals with a live crow cawing. 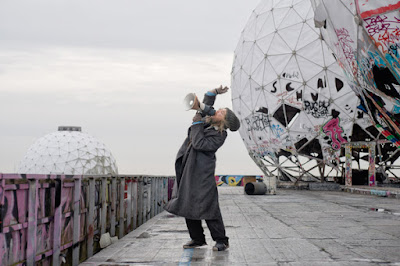 Cate Blanchett brilliantly maintains the perfect cadence in each scenario, despite the incongruous nature of her proclamations. It’s most amusing to see Cate as the newscaster and reporter (hence 12 scenarios, 13 performances) in a segment discussing about conceptual art. If we press mute and watch the scene, it would seem to be just seem like typical news weather report. As a cinephile, I was naturally intrigued by the staging of film manifestos. In this one, Cate plays an elementary school teacher and her eyes dilate with wonder while explaining the different cinematic school of thoughts to the pupils.  She starts with Jim Jarmusch’s ‘Nothing Is Original’ statement (from his ‘Golden Rules of Filmmaking’) and switches to Stan Brakhage’s evocation of ‘the untutored eye’ to Godard’s ’It’s not where you take things from—it’s where you take them to!’, and then to the ‘ecstatic truth’ idea of Werner Herzog (which talks of creating or stylizing realities). Eventually as the teacher monitors the student’s work, she recites Lars Von Trier’s Dogme 95 film movement rules, which actually stands as the perfect contradiction to Herzog’s notion. In the incredibly hopeful ending, the camera pans across a school playground in slow-motion, encapsulating the illuminated faces of the children, and the slow fluttering of a pigeon towards the sky signaling the new generations’ elated spirits (which may spawn more artistic strategies). 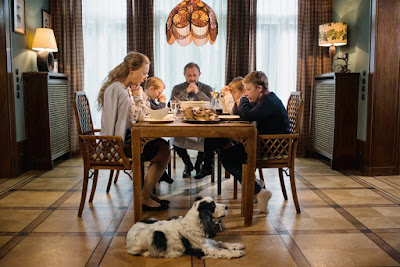 Blanchett’s impeccably staged readings are finely complimented by Rosefeldt’s keen eye for architecture (vividly elegant cinematography by Christoph Krauss). From the abandoned industrial campus to the colossal garbage incinerator plant to intricately aligned financial trading floor to the surrealistic chamber (the scientist in protective-suit enters into it) to the luxurious retreat of the one-percenters, the places and the expressed thoughts sublimely showcases our extremely polarized world (in terms of economical, artistic, cultural, sociological levels). Some of the cryptic, talk-heavy philosophies that are heaped upon one do endanger in watering-down the effectiveness of the polemical and contemplative words (and most of these are super-complex art theories). But the passion with which the director and actress addresses the ground-breaking artistic statements, offers quite a lot of sensory and visceral pleasures. The consistent stream of wit and subtle ironies inculcates the message of how this motley of celebrated edicts are capricious in nature, despite having been narrated in a definitive voice.

at November 15, 2017
Email ThisBlogThis!Share to TwitterShare to FacebookShare to Pinterest
Labels: 2017 Movies