Mudbound [2017] – An Earthy and Timeless Portrayal of a Segregated Society 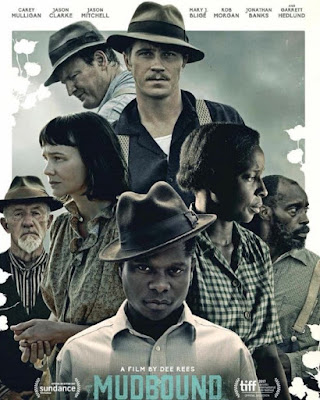 Dee Rees’ adaptation of Hilary Jordan’s 2008 novel Mudbound couldn’t be reductively labeled as a film on the ‘American race problem’. Yes, the story is set in a particular time (post-war America) and place (American South) so as to showcase the familiar, well-documented racial atrocities of the past. Yet the tale is told in a restrained manner with lively, well-rounded characters that it gains a universality, unveiling the fallacy of perpetually involving in the ‘us vs them’ debate. Mudbound tells the tale of two families, divided by race.  It unfurls from the multiple perspectives of the observant family members. Except for the final showdown, the film is devoid of the viscerally brutal racist activities. What we see for the most part is the much-nuanced, preexisting division in everyday life.  Unaddressed historical truths and unaltered, savagely archaic political system diffuses the concept of segregation deep down into the very DNA of the people. Mudbound tells the soulful transformation of few members of the family who takes an effort to break those societal shackles and come to stand on equal ground, finding warmth in each other’s humanity. Despite being occasionally driven by few conventional plot-mechanics and melodramatic turns, the film by and large takes an understated approach which may emotionally resonate across a wider spectrum than just contemporary Americans.

The script for Mudbound, written by Dee Rees and Virgil Williams, is structured in changing perspectives which in the earlier portions doesn’t bring much fluidity to the narrative. Each perspective (narrated through the characters’ voice-overs) doesn’t exactly fee disconnected from each other, yet the overwhelming amount of words falters a little in realizing the characters’ inner life. Or one could say the writer provides too much context and constantly interrupts before allowing ourselves to align with the characters. It gets a better once the characters’ inner thoughts are conveyed and their life is witnessed through everyday chores and unspoken emotions. This earlier approach of shifting point of views may seem to work perfectly for a sprawling novel, but on-screen the talky inner monologue only feels dramatically over-familiar. 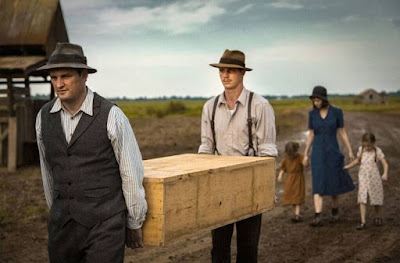 Although divided by race, the white-skinned MacAllans and dark-skinned Jacksons have attached their hopes and livelihood to the same, sprawling grim stretch of land. Henry MacAllan (Jason Clarke) relocates his wife Laura (Carey Mulligan) and two little daughters to their family’s cotton farm, situated at Memphis in the Mississippi Delta. Henry’s old father (Jonathan Banks) is a bigoted man who constantly utters the ‘n’ word in a coolly casual manner. Henry’s handsome and bohemian younger brother Jamie (Garrett Hedlund) has enlisted in the Air Force after Pearl Harbor, flying B-25s Bombers. Henry’s fantasy of leading a peaceful farm life crumbles in the heat and desolation of the unforgiving land. Laura is confined to fulfill the maid role, her youthful glow is replaced with a arid patches. For generations, the land has been worked by the sharecropping family of Jacksons. The patriarch of the family Hap Jackson (Rob Morgan) in the Sundays takes up the duty of country preacher. Mother Florence (Mary J. Blige) takes care of three sons and a daughter and staunchly supports her husband’s agricultural ambitions. The eldest son Ronsel (Jason Mitchell) also enlists in WWII. He is assigned to General Patton’s famous 761st “Black Panther” tank battalion. The two women and the two embittered veterans of the families are the tale’s chief narrators. Ironically, upon his return Ronsel feels he is seen more as an American at the war front than at the home-front. Afflicted by PTSD, Jamie starts to share his combat experiences with Ronsel. The myriad of personal struggles after returning home forges a kind of friendship between the two veterans. 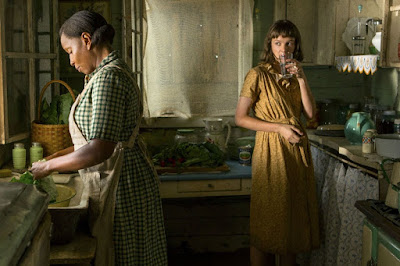 For a change, Mudbound’s technical crew predominantly consists of female technicians: Rachel Morrison (cinematographer), Mako Kamitsuna (editor), Tamar-kali (music composer), Angie Wells (make-up artist) and so on. Director Dee Rees debut feature Pariah (2011) was a Sundance sensation which told the story of a Brooklyn-based lesbian teen. Powered by the performance of Adepero Oduye, Pariah was a stirring coming-of-age tale that deals with conflicting identities and sexual expression. Even though Rees has taken six years for her sophomore effort, she has taken up far-ambitious project with a wider canvas and themes. Rees’ uninhibited vision and fine-tuned sensitivity plays a significant role to cut through the narrative’s irksome melodrama or unearned sentimentality. Rees and her cinematographer Rachel Morrison perfectly succeeds in creating a gritty atmosphere, oft making the visual landscape to signal the characters’ emotional nature. They effectively foreground the palpable cruelty of life in the farm: the omnipresent violence and harsh weather. As I mentioned earlier, the replication of novelistic structure with its internal monologue (uttered with Malick-ian eloquence) and shifting viewpoints slightly overwhelms the action on screen. Nevertheless, Rees and Virgil Williams’ writing at times provides clever insight to the dynamics between the two families, especially through Florence’s perspective. When Henry seeks the aide of Florence to take care of her daughters, she solemnly states in the background, “If something had happened to that woman’s child that would’ve been the end of us”. Hap’s meditation on ‘deed’ is yet another clever piece of writing. To Rees’ directorial efficiency, I must say the film’s memorable achingly emotional scenes happen when only few words are used: for example, the candy-bar scene between Florence and son Ronsel, or when Laura finally has the privacy of a bath and longingly gazes at the horizon, or when Ronsel and Jamie eventually acknowledge their deep friendship. What’s further more welcome of Rees’ visual choice is her good judgment in the portrayal of on-screen violence.

Rees has particularly done well in the realization of characters like Florence and Henry. The African-American matriarch’s watchfulness and quiet dignity consistently adds extra layer to the character who might otherwise be painted in a single note of pity. Henry might be wholly different than his bigoted pappy and his Klansman friends, but he still thinks of his whiteness as a privilege. Henry never uses ‘n’ words to address the black workers, but subtly claims his superiority over Hap (in the way he barges into Hap’s house or imposes economic hardship on the family). Both Jordan’s novel and Rees’ film, despite its gritty authenticity, boasts measured hopefulness.  The final coffin-burying act in the mud hopes for the disinfection of racial hatred from the land. Furthermore, the transportation of another hidden coffin is diffused with both hope and irony; ironical because the African-American finds his coveted freedom in the crisis-ridden post-World War II Germany. Eventually, Mudbound pays hefty tribute to the perseverance of the oppressed who might be figuratively and literally silenced, but never ever defeated. The film contains one of the grand ensemble performances in recent American cinema. Garett Hedlund, whose swagger often gets lost in the poorly conceived characters, has finally been blessed with a memorable one. Mary J. Bilge (hip-hop singer & songwriter) and Carey Mulligan play their role in a very non self-conscious manner, their feelings of empathy and concern well up deep from within. As in Pariah, Rees derives wonderful acting moments while subtly focusing on the characters’ private struggles.

Mudbound (135 minutes) is an ambitious historical drama which examines the familiar brutalities of Jim Crow era American South in a timely manner using engaging, dynamic characters. Even though execution doesn’t always live up to the grand narrative ambitions, it is rarely less than involving.