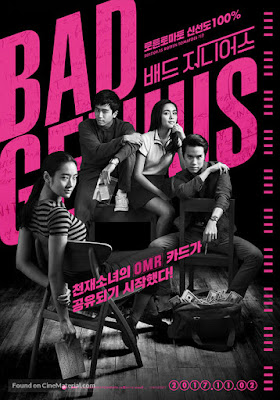 Thai film-maker Nattawut Poonpiriya’s Bad Genius (2017) immediately brings to mind films like Rian Johnson’s Brick (2005) and Richard Kelly’s Donnie Darko (2001); one put an interesting spin on the neo-noir characteristics by setting it in a suburban high-school, while the other brought mind-bending sci-fi themes to high school. Bad Genius brings the heist film setting to school. Instead of robbing truckload of precious metals or bursting through bank vault, the students’ mission here is to cheat on an international exam, which is actually made as intense and unexpectedly thrilling as a detailed robbery. Drawn from real-life exam cheating scandals, Poonpiriya’s second feature provides top-notch popcorn entertainment and savvy social commentary – from institutional apathy, class inequality to academic pressures. Right down to the melodramatic twists and misleading setups, Bad Genius includes all the caper-movie elements, for best and worst. Winning the best feature film award at New York Asian Film Festival (NYAFF) and becoming a huge blockbuster at domestic market, the film had resonated with and entertained audience around the world because of its universality (who doesn’t hate this exam-oriented education system!).

The titular anti-heroine is a timid, straight-A student Lynn (model-turned-actress Chutimon Chuengcharoensukying’s first role) whose excellent grades gives her a chance to enroll in an elite school. Lynn hails from a middle-class family, but her determined (recently divorced) father Vit (Thaneth Warakulnukroh) is eager to provide his daughter the best education. Lynn’s initial reticence to join the school is shattered by school headmistress’ proposal of a scholarship. At grade 10, Lynn enters the prestigious private school. The narrative is told in flashbacks with grade 12 Lynn and her classmates are being interrogated in a darkly-lit room. Lynn’s first friend at the school is Grace (Eisaya Hosuwan), a gregarious, chirpy and not-so-academically-smart girl with wealthy parents. She is naturally drawn to acting, but the school demands higher GPA to pursue ‘extra-curriculars’. Hence Grace makes Lynn to tutor her, further providing the title ‘Mentor Lynn’.  Excessively gifted in mathematics, Lynn easily finishes the exam, while her friend Grace desperately stares at the questions despite the tutor’s efforts. Lynn cleverly slips answers to Grace and this later catches the attention of Grace’s rich boyfriend Pat (Teeradon Supapunpinyo). 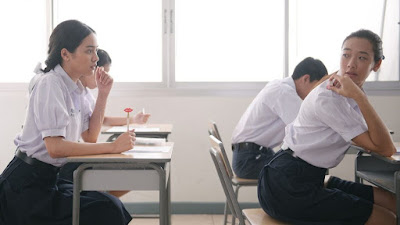 Pat offers a business proposition: a tempting amount for providing answers during the exams. Lynn discovers how her father scavenges for money to pay strange additional fees at school (despite the scholarship). Vexed by this, Lynn devises an elaborate code to relay answers at the exam hall. Soon, quite a few classmates line up to learn  Lynn’s ‘tutoring’ methods. The fool-proof quality of the cheating plan is tested when another poor, scholarship student, Bank (Chanon Santinatornkul) finds something amiss at the exam hall. Bank’s single mother runs a broken-down laundry shop and he finds the idea of cheating at exams disgusting. Due to Bank’s complaint, headmistress gaze falls upon Lynn, while simultaneously the reason for Lynn’s ever-expanding income is discovered by her father. But, unyielding Pat and Grace approaches Lynn with a far bigger business proposition: to help them pass the Standard Test for International Colleges (STIC) and consequently achieve their parents’ dream of going to Boston College. 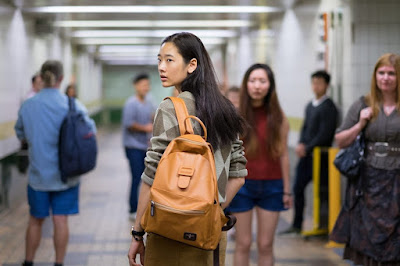 On paper, it may sound how a comparatively lowbrow activity like cheating in exams can provide the adrenaline rush of high-tech thieves breaking into a vault. This is where writer/director Poonpiriya and his script team (Tanida Hantaweewatana, Vasudhorn Piyaromna) completely surprise us. Their first victory lays in the mostly genuine characterization of Lynn, a mousy girl who embraces deceit after facing with double standards of the system (the golden rule of heist films: the protagonist always steals from the system that has stolen from them). The fine character development combined with detailed and precise evasive plans lends one delightfully tense moment after another. The director perfectly makes use of the visual grammar of heist films: quick cuts, tense close-ups, ticking-clock moments, etc. Except for the final confrontational scene between Lynn and Bank, director Poonpiriya cleverly embeds thematic elements alongside the entertaining portions. The acerbic commentary on the enlarging rifts between haves and have-nots and futility of academic tests largely follows the ‘show-not-tell’ approach. The detached shot of Bank’s mother doing laundry and later the highly focused shot of Pat’s parents having dinner at an opulent restaurant speaks for itself. We repeatedly see the shot of Lynn looking into her reflection on multiple mirrors, hinting at the multiple conflicts tearing her apart from inside. The darkly-lit room where the students conceive the cheating plan perfectly contradicts the final shot as Lynn enters a very white room. Such detailed visual schemes and carefully conceived angles predominantly drives the mood of this crime-caper film.

The performance by the group of largely inexperienced young cast is nothing short of astounding. Good-hearted caper movies don’t only succeed with the plans, but also triumphs over wrong temptations. Bad Genius follows such narrative thread, where we in a conflicted manner root for Lynn to succeed as well as hope for the ‘right’ thing to win over. Like the compassion showcased towards grown-ups wronged by the system, the narrative here boasts enough empathy for the students, including Pat and Grace who are relentlessly spoiled by their clueless parents. Good heist movies always make up for meaningful entertainment because the robbery isn’t just about high-tech gadgets and mastermind plans. It’s often driven by desperation, greed, burgeoning societal pressure among other things. In fact, the success of a heist movie relies on our very personal reaction to the material filmed. Bad Genius definitely prolongs the narrative for the sake of melodramatic twists and infuses misleading behavior just to surprise the viewers. Yet for all its narrative missteps, the film extracts an immediate reaction to its societal themes without getting in the way of lively action. In the end, Bad Genius (130 minutes) turns out to be a highly dynamic, complex and surprisingly poignant caper cinema.