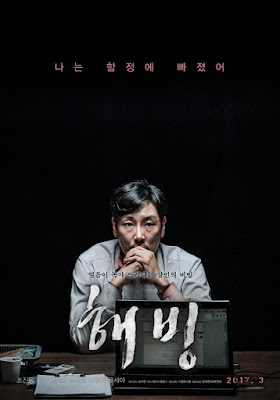 Korean film-maker Soo-youn Lee’s slow-burn psychological thriller Bluebeard (2017) opens with a radio broadcast of weather report ominously announcing the possibility of warmer winters, further adding how ‘once Han River used to unfreeze completely only by April’. Interlaced with this audio broadcast, the camera broodingly moves through an underside of a bridge before resting on the derelict river’s shore as a headless corpse bubbles up through the melting ice. The camera then gracefully pans up to reveal the bustling highway traffic and cuts to the distressed face of Dr. Seung-hoon (a terrific Jo Jin-woong who played the sleazy uncle character in ‘Handmaiden’), traveling in a bus that’s cruising through treeless lands of huge construction sites. It’s an introductory scene that reaches beneath the elegantly structured metropolis objects to gaze at its darkness lying within. It deftly makes a commentary on the turbulent urban societies, in a sort of Lynchian fashion, without making much fuss. Bolstered by Uhm Hye-jung’s cinematography, director Soo-youn builds upon this fascinatingly odd premise, promising to deliver a subliminally creepy moody piece. The brilliant stylistic composition, at least in the earliest parts, generates intensity that makes us clutch for the word ‘Hitchcockian’. Alas, with the predictable, if not inane, onslaught of twists in the third act, the narrative implodes, leaving us with strong dissatisfaction.

Director Soo-youn Lee made her directorial debut with the flawed yet strikingly visualized psychological horror The Uninvited (2003). After a thirteen year gap she has made her second film, which shares her debut feature’s themes of discounted truths and personal trauma. Despite the bizarre and annoying twists in the later-half, Bluebeard is watchable for its persistently effective first 70 minutes and for not following the typical thriller blue-print which we often witness in American works. Over the last decade, Korean screenwriters & directors have concocted some intriguing on-screen sadistic killers. While films like Memories of Murder (2003), I Saw the Devil (2010), and The Chaser (2008) occupies the top-tier in this unique sub-genre, there has also been less impressive, nonetheless greatly entertaining second-tier of killers’ movies like Midnight FM (2010), Confessions of a Murder (2012), No Mercy (2010), Tell Me Something (1999), etc. Bluebeard naturally falls under the second-tier. 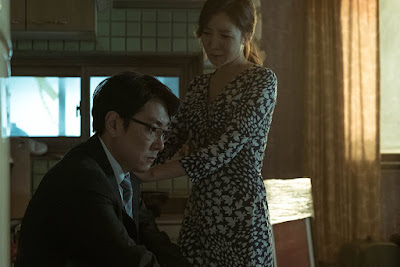 Recently divorced and financially broken Seung-hoon, whom we first see in the bus, is a colonoscopy specialist moving from the busy Gangnam district to a clinic in a small town, situated alongside Han River. Despite the menacing atmospheric tone, the narrative sporadically breaks into trademark Korean brand of black humor. First of all, we see patients, under the effects of the sedative used during colonoscopy procedure, babble out their awkward, dirty secrets. Seung-hoon has rented a cramped apartment, which is filled with medical text books and plenty of mystery novels (the doctor’s only pastime), and is situated above a family-run butcher shop. The family’s creepy old patriarch (Goo Shin) is seen consuming raw pork meat and his oddly cheerful son Sung-geun (Dae-myung Kim) tries to establish camaraderie with the visibly distressed doctor. The other members of the butcher’s family are Sung-geun’s chirpy second wife and the reticent teenage son. Dr. Seung-hoon mostly desires to be alone, fending off the amorous advances of his young nursing assistant Mi-yeon (Lee Chung-ah). He takes his 9 or 10 year old son to a restaurant in the weekend, and the boy is glued to his smart phone than indulge his father with a meaningful conversation. 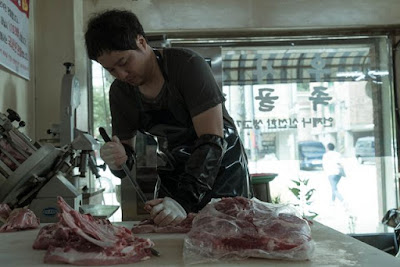 The doctor’s unease escalates when people in his hospital and news reports repeatedly talk of unsolved serial murders in the area that seems to have resumed after a long period. One day, the old man from the butcher shop has an appointment with the doctor. Under the clutches of the anesthetic, the old man whispers about scattering human parts across the river and other dumping sites; “Fingerprints? If you’re worried, cut off the fingers…” the old man offhandedly remarks as if he’s been doing this for decades. The paranoia that grips the doctor after this drugged confession provokes him to put the pieces of puzzle together and get to the bottom of the truth. Consequently, a mysterious retired cop (Young-chang Song) starts surveilling the doctor. Seung-hoon drinks with the old man’s son and in drunken stupor he slips into the shop’s freezer and finds an important evidence to support his claims: a human head packed inside a black, plastic bag. Soon, the narrative spirals off in different directions and the conflict between butcher and the doctor seems to get more personal. It all culminates with the predictable first layer of twists, over-explained with flashbacks. Later, we witness the purposefully convoluted and kitschy second layer of twists which totally robs the narrative off psychological profundity.

Director Soo-youn Lee abruptly cuts the scene, employs fade out and the diabolically framed scenes are often revealed to be the protagonist’s vivid nightmares. The nightmare episodes increasingly used to insist upon the blurring of boundaries between reality and imagination for Seung-hoon. The repetition of ‘it’s all a dream’ reveals, after a time gradually lessens our interest in the narrative (cheating the viewers too much). All the earlier disjointed cuts and nightmare episodes easily make us to guess Seung-hoon to be the text-book definition of unreliable narrator or beholder. Although the director unnecessarily prolongs these earlier scenes, adding more and more subplots, there are some memorable and deeply unsettling visual flourishes (for example the surrealistic scene where the butchers sharpen their knives as a naked headless body hangs from the hook). The other interesting aspect, from visual standpoint, is Soo-youn’s observation of these freshly popped-up cities. It’s as if she is representing such urban sprawls as the hideous facet of a society (of course, a great no. of outstanding serial-killer films has deftly associated industrialization and rampant expansion of urban spaces with serial killing). Nevertheless, the unconvincing and ill-advised point-of-view shifts in the last half of the film basically undo certain intriguing narrative threads. These insanely prolonged flashbacks and ‘story’s not yet over’ twists suffer from severe lapses in logic and pacing issues. In the end, the film becomes a mess rather than being a puzzle.

Even though Bluebeard (118 minutes) isn’t a path-breaking Korean thriller, it’s good for half of its running time, exuding a palpably menacing mood. And, those who love thrillers wrapped inside insane amount of twists (no matter how absurd it is) may find it alluring.