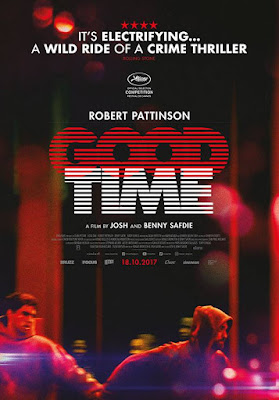 It’s not often we see a high-wire American crime/thriller without a single shot of a gun. Josh and Ben Safdie’s Good Time (2017) is bathed with frenzied energy and profanity-ridden paranoia, relentlessly generated by a reckless blonde-haired protagonist. It’s definitely a violent film that exposes a part of New York’s crime underbelly in a gritty and authentic manner. Yet the Safdie brothers smartly subverts from the usage of typical gun violence and still succeeds in showcasing the unconscionable brutality of one man with questionable morals. Good Time possesses the mad-cap energy of Martin Scorsese Michael Mann’s early movies. From incorporating guerilla-style film-making for observing the unforeseeably volatile street life to unveiling raw emotions of the characters, it owes a lot to those film-makers' idiosyncratic crime flicks.

Irrational behavior and self-destruction is pretty much the origination point of the Safdie Brothers’ New York based pieces. Their semi-auto-biographical first feature Daddy Longlegs (aka Go Get Some Rosemary, 2010) is about a disorderly father figure. Heroin-addiction drama Heaven Knows What (2015) is a sensational blend of fiction and raw documentary which was based on the unpublished memoir of Arielle Holmes who plays a lightly fictionalized version of herself. With Ronald Bronstein once again taking up the co-writer & co-editor duties, Good Time becomes a perfect canvas for the brothers’ oddly visceral character study: this time a feckless conman mad scrambling over the course of a long New York night. The narrative is uncomfortably contrived and disjointed at times, failing to replicate the staying power of the aforementioned film-makers’ works. Nevertheless, the film keeps us totally occupied throughout its running time and moreover Robert Pattinson’s pitch-perfect metamorphosis as a frazzled small-time crook is a marvel to behold.

The narrative that runs over the course of two days and one night opens at the office of a social services psychiatrist. He interviews the mentally challenged Nick Nikas (Benny Safdie) and gradually motivates him to not just give monosyllabic answers. There’s a sense that the psychiatrist is breaking through Nick to address his problems when Constantine Nikas aka Connie (Robert Pattinson) barges in and takes out his younger sibling. The chaos that starts there with Connie’s intrusion never relents from then on. Connie is fiercely protective of Nick whom it is early implied that suffered at the hands of their grandmother. Nevertheless, it becomes evident that Connie’s love for Nick can destroy things as we see them entering a bank with a rubber mask which disguises themselves as black men. Connie silently passes out a note to the teller and receives the money in a tightrope sequence. The Safdie brothers shackle us to the claustrophobic, tunnel vision shots of its characters throughout the narrative (similar to dazzling, single-take crime thriller Victoria) that we repeatedly fret over the dangers lurking outside the frames. The bank robbery plan is botched by the teller’s smartness and Nick’s ineptitude. On hindsight, the bank robbery seems to be the least preposterous of Connie’s schemes. What follows is a helter skelter chase through the grim alleys and neon-lights of New York, where our self-centered, belligerent protagonist makes a great mess of things.

Ben and Josh Safdie perfectly channel their peculiar, particular style into many of the typical genre scenarios. This tactic of putting a fresh-spin on familiar things brings forth certain fascinating visual designs and staging. For example, the scene towards the end, when the tunnel vision suddenly breaks into an agoraphobic shot in order to showcase an entirely different perspective, or the creepily-lit chase sequence at the fun-house. The other strong aspect of Safdies’ direction is how they hint at the inherent ugliness of the protagonist or his penchant for cruel decisions without often resorting to in-your-face violence outbursts. Sean Price Williams’ (Queen of Earth, Heaven Knows What) anxiety-ridden cinematography applies a lot of vivacious primary colors and perpetually suggests ominousness through extended & effective close-up shots. Daniel Lopatin’s pulse-pounding synth score (the musician is credited under a weird pseudonym ‘Oneohtrix Point Never’) finely attunes to the deliriously vibrant visuals.

As I mentioned earlier, Good Time doesn’t have much depth to it. It’s designed as an immersive visual experience. Whatever subtext or meaning it poses beneath is few and far between. Although the sheer unpredictability and bat-shit craziness of the narrative attracts comparison to less-seen masterpieces like After Hours (1985), it never reaches that level of thematic profundity [‘the kind of existential hell dreamed up by Sartre’, says the Sense of Cinema article about After Hours]. The one memorable, if not overt, social commentary in Good Time is its depiction of casual systemic racism. We are left wondering why the cops attending the alarm at Amusment Park immediately believe Connie’s words and assume the black guy as the perpetrator. In fact, the two people arrested in that scene are innocent ones, yet cuffed on the basis of their color [the white guys wearing African-American masks to rob a bank is taken from a real scenario]. The brothers’ also makes a slight commentary on the mental health industry, painting the fate of Nick with an ambiguity in the unexpected final sequence. Robert Pattinson takes a big leap forward with the role of Connie. But it would simply be myopic and unnecessarily hyped-up to draw parallels with the antihero protagonists of Dog Day Afternoon and Taxi Driver. The inherent problem with Connie is that he is neither likable nor his antics relatable on some level. The downward spiral of the character only stays amusing at times (never wholly disturbing) that the title doesn’t feel totally ironic. If not for Pattinson’s undeniably intense presence, the self-destructive journey of Connie wouldn’t have engrossed us this much. Apart from the vibrant performance of Buddy Duress as the gaunt knucklehead Ray, the supporting performers like Jennifer Jason Leigh and Barkhad Abdi are just recruited to play stock character types.

The young film-making brothers from New York – Ben and Josh Safdie – repeat their talent for constructing atmosphere of chaos and mayhem in their well-received, third feature-film Good Time (100 minutes). Bolstered by Robert Pattinson’s electrifying performance and the brothers’ singular creative energy, the film makes up for what it lacks in emotional depth.