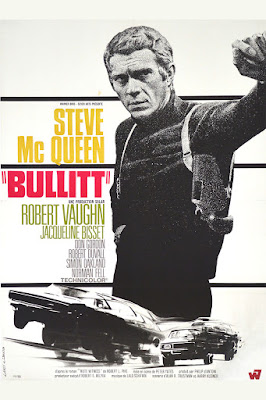 There are some great old movies that necessarily get better with time. The unspoiled emotional connection with the narrative and characters provides the staying power for those classics. Then, there are many old films, well-received at its time, but ultimately looks dated and uninvolving for new generation of viewers due to the unstoppable transcendence of cinematic boundaries. We can certainly appreciate the craft that has gone into making the film, but the thing which made it special in the past has been lost to time. Peter Yates’ police procedural Bullitt (1968) happens to be one of prime examples for such category of old films. Bullitt was famous for two elements: Steve McQueen’s (considered to be the personification of on-screen cool and suave) central turn as no-nonsense police detective Frank Bullitt; and the impressive car chase scene through San Francisco’s perpendicular, narrow streets. Released a year after Arthur Penn’s crime masterpiece Bonnie and Clyde, Bullitt’s stark, stylized portrayal of violence became another vital talking point of the film (Richard Fleischer’s Boston Strangler and Don Siegel’s Madigan also released in the same year – known for its discomforting on-screen violence in Hollywood cinema).

Bullitt was written by Alan R. Trustman and Harry Kleiner, which is based on Robert Fish’s novel Mute Witness. Critics who had compared the book and film adaptation have pointed out the overall change in narration and mood. Mute Witness is said to be murder/mystery, while its movie adaptation is a slow-burn action/thriller. Initially, Spencer Tracy was considered for the protagonist role, since the detective in the novel was less of a cool guy than in the film version. After Tracy’s death, the script was passed to producer Philip D Antoni and actor Steve McQueen. They both checked off Peter Yates to take over the directorial rein. Peter Yates’ impeccable direction of 1967 heist thriller Robbery (based on infamous Great Train Robbery) provoked the actor & producer to bring him on-board. Director Peter Yates' controlled pacing and detailed logistics in action sequences made him the right candidate to flawlessly actualize the car chase scene (which was brought into script by producer Antoni and the scene wasn’t left to be shot by the second unit). 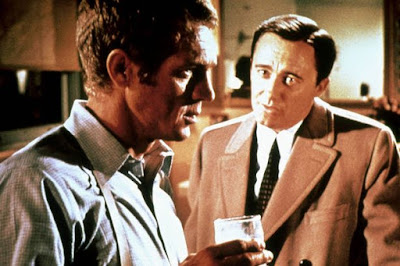 Right from the opening sequence, what’s evident is the undeniable sense of style in Peter Yates’ staging. The opening shot depicts the faces of group of gangsters, standing against dark background, ready for the action. The fleeing of former Chicago mobster Johnny Ross (Pat Renella) sets the narrative wheels in motion. Johnny is set to testify against the crime syndicate at an upcoming Senate subcommittee hearing, led by hard-nosed politician Chalmers (Robert Vaughn). The mob would do anything to get its hands on Johnny. Hence Chalmers asks police detective Frank Bullitt to protect Johnny until he is able to testify in court. However, that night two hit-men break into the hotel the witness is staying and fatally shoots him. A young police detective is also shot in the leg. The attempt to murder Johnny further continues in the well-guarded hospital. Later, Johnny succumbs to his wounds. Bullitt covers up the witness’ death to avoid facing repercussions from Chalmers and most importantly to get to the bottom of this murder before the superiors closes the case.

Bullitt is outright Steve McQueen the star’s show. Frank Bullitt is slightly different than the usual charismatic turns from Mr. McQueen. Bullitt is a man of few words with the saddest pair of eyes. There are many silent scenes, immaculately studying the star’s face. Incredibly talented Jacqueline Bisset (who’s often pigeon-holed to play stunningly beautiful girl) plays Bullitt’s art-loving girlfriend Cathy. Apart from a sequence where she confronts the ugly reality behind her boyfriend’s police work, she’s pretty much left to lie under the sheets in bed showing her bare-back or sensually kiss Bullitt. Underdeveloped is the word to express Cathy and Bullitt’s relationship. What’s more uninteresting is the butting-heads relationship between Chalmers and Bullitt. The overly restrained narrative style only allows Robert Vaughn’s Chalmers to be a blatant and abusive politician. Of course, Mr. Vaughn plays his underwritten character to perfection (diffuses it with cool menace). The verbal exchanges between Vaughn and McQueen are also written in a vague manner, never expressing the depth of their interdepartmental ego clashes. Although there’s not many flaws in the 60s style acting, the banal treatment of characters doesn’t provoke any sparks during the conversation. The supporting cast is full of good character actors like Robert Duvall, Simon Oakland, Don Gordon, etc although they are not left to make much impression. 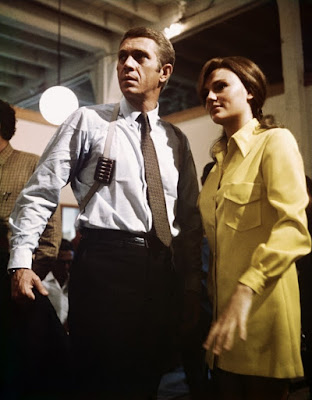 The most commendable aspect of Peter Yates’ direction is the use of location to add the much-needed authenticity and grittiness into the proceedings. Cinematographer William A. Fraker and director Yates’ distinct location shooting makes excellent use of light and space, matching the greatness of outdoor scenes in Hitchcock’s Vertigo (the great San Francisco film). The iconic car chase scene and the less-talked but equally wonderful‘airport confrontation’ scenes were the prime examples of designing realistic as well as hair-rising action set-pieces. On hindsight, Bullitt’s chase scene does seem to be trumped by the harrowing chase in the busy NYC streets in William Friedkin’s “The French Connection” (1971, the stunt coordinators – particularly Bill Hickman -- involved in Bullitt realized this great scene too) or the mad-cap mall car chase in “The Blues Brothers” (1980). Yet, the high-speed car chase in Bullitt still remains fascinating (an amalgamation of great editing and splendid stunt driving) and it was one of the instances that revolutionized Hollywood’s action standards (directors William Friedkin and John-Woo had immensely praised this scene). The solemn foot chase inside airport premises was also staged brilliantly as the tension simmers till the shootout. Such tight-rope scenes in the airport aren’t really possible to shoot nowadays. The documentary-realism approach employed by Yates doesn’t add any profound layers to the narrative or characters, yet it leads to few interesting scenes: for example, Bullitt’s mechanical shopping in the grocery shop or Cathy’s slow-buildup of nervousness before she runs up to the motel room. Furthermore, this documentary-realism approach was more perfectly used by directors like Michael Mann and William Friedkin (and by Yates himself in his 1973 drama/thriller “The Friends of Eddie Coyle”).

Bullitt (114 minutes) is a cop thriller with a wafer-thin story line and overly vague script stretched almost to two hours. It’s a special product of another age which may not be wholly involving to modern viewers. Yet, it’s definitely a watchable movie, bolstered by the cool presence of Steve McQueen and vivid outdoor shooting around the San Fransisco hills.