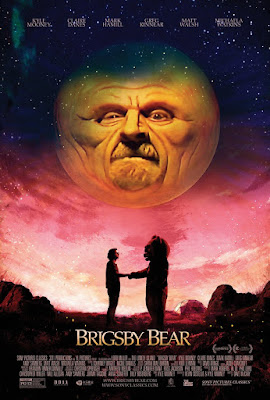 It would be better to watch Dave McCary’s directorial debut Brigsby Bear (2017) without reading the plot-line or reviews (like this one): not because it contains spine-tingling twists; but to just have an unadulterated experience of observing the opening scene. In fact, the slightly disorienting opening sequence stands superior to the narrative’s sporadic descent into fuzzy sentimentality in the later parts. We see a grown man, may be in late 20s, named James (Kyle Mooney) watching VHS tapes of a kids TV show called ‘Brigsby Adventures’. The big, furry space bear Brigsby goes on adventures around the universe to win over the evil Suncatcher with the help of Smile Sisters. In the process, the bear dispenses some math equations among other [‘If you have romantic feelings, touch your penis twice a day’, it quips] simple philosophies of life. It’s evident that the man-child James is obsessed with Brigsby enough to fill his room with Brigsby bedspreads, lampshades, huge library of all the episodes in VHS-tapes, and other variety of merchandises. He discusses about the show in an online forum he has specially created.

Over dinner, he talks with his parents (Mark Hamill and Jane Adams) about the odd convoluted plot development and we also see a weird bedroom poster that reads ‘Curiosity is an unnatural emotion’. In the night, father and son emerge from their underground bunker to see strange, dangerous creatures around their abode. In the morning, the father goes outside to work wearing a gas-mask. It’s probably a post-apocalyptic scenario or the family members are colonizers of a planet. But, that’s not the truth because the creatures we observe are made of cardboard. So the world James inhabits is entirely an illusion. Of course, Brigsby Bear isn’t a dark chamber drama, in the vein of The Castle of Purity, Dogtooth or Room to showcase the deep trauma of being confined to small space and strict rules. It’s a tragicomedy sprinkled with light-hearted moments. The ‘why’ is revealed sooner as FBI agents storm into the bunker and arrest James’ parents. James meets his real mom and dad and learns that the old ones are his abductors and the air isn’t actually toxic. Most disturbing of the revelations is that Brigsby is the creation of his abductor father and he is its entire audience [sort of opposite to Truman Show]. 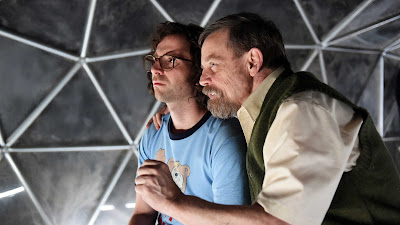 Despite learning the truth, James isn’t angry over his kidnappers and remarks ‘it’s cool’ to have a show for himself. The good thing about these initial portions is that James’ character is well-realized. We can understand his decision to not hate his old parents and the strange feelings in facing the real world and real parents (Michaela Watkins, Matt Walsh). James now also has a younger sister Aubrey (Ryan Simpkins), a high-schooler who often frowns at him. However, he makes friends with Aubrey’s pals Spencer (Jorge Lendeborg Jr) and Meredith (Alexie Demi). The detective Vogel (Greg Kinnear), the one who rescued him, steals some of Brigsby things from evidence room out of kindness. With the help of his new friends James wants to make one Brigsby Bear movie – the final showdown between the bear and Suncatcher – to seek some closure and move on with life.

The writers Kyle Mooney, Kevin Costello and director Dave McCary were all part of Saturday Night Live (SNL) show. Writer & performer Mooney and McCary have carried their childhood friendship and mutual interest by making videos for comedy group Good Neighbor. Later McCary has directed few segments featuring Mooney in SNL. The trio as expected has a fine understanding to balance the delicate emotions with goofiness. James was well-written, capturing his tragic predicament and vulnerability. And Mooney performs the role with good comic timing without turning him into an idiot. Mooney’s deadpan dialogue delivery, while facing the harsh reality or his bout of enthusiasm when talking about the beloved bear is fascinating to watch. McCary’s craftiness clearly brings to mind the works of Michel Gondry. 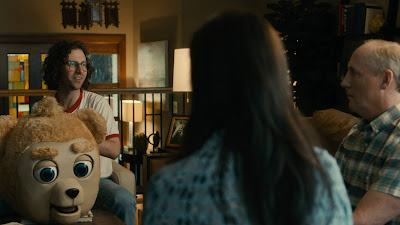 Brigsby Bear mostly celebrates the joy of creativity and imagination. Similar to coming-of-age movies like Son of Rambow, It’s a Kind of Funny Story, and Me, Earl and the Dying Girl, the film depicts the triumph of imaginative mind over deep trauma or depression; the socially awkward youths choosing the comfort of creation over the tiring societal interaction. Naturally, the script contains the pool of schmaltzy elements those films also had. Brigsby Bear definitely keeps us engaged for its running time but there’s also feeling that it has failed to address some deep layers in the narrative and simply settled for predictable pathos. Once after the ‘explosion’ scene, it begins to run out of steam with scenarios that’s either under-written or far-fetched. The questions about James’ mental health and wealth of psychological material are brushed off for the sake of a feel-good ending. The only interesting scene which deals with James’ psychological state is when he meets the waitress/smile sisters (Kate Lyn Sheil) at a diner. In the end, the conceits in the plot overpower the wonderful peculiarity of the opening scenes. Still, Brigsby Bear (97 minutes) is a watchable gentle comedy, which eschews narrative depth for light-hearted fun and sentimentality. Those looking for a gripping commentary on the pop-culture obsession can look elsewhere.