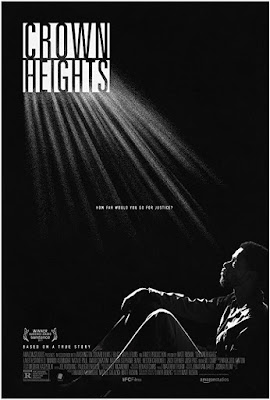 Matt Ruskin’s Crown Heights (2017) tells the story of gross injustice inflicted upon Colin Warner, an African-American who spent more than two decades behind the bars for a murder he didn’t commit. Mr. Ruskin mildly explores many of the themes of Ava DuVernay’s documentary on the broken American legal system (titled “13th”) whose righteous fury exposes the inequities that's only forced upon people of color. While DuVernay provides a broader overview of how the American justice system boosted up incarceration rates to turn prison into a thriving industry, Crown Heights tries to portray one man’s maddening experience of fighting against the apathetic judicial machine. Aided by nuanced performances from Lakeith Stanfield (Short Term 12) and Nnamdi Asomugha (also the producer), the movie ought to have been the rich study of a wronged man’s hard psychological survival. But sadly, an overly streamlined and hastened script seldom brings the gripping story to life and doesn’t bestow any deeper insight a documentary or Wikipedia article could do. Nevertheless, Crown Heights is watchable for the lead performances and Ruskin’s few admirable directorial touches amidst his scattershot approach to the material.

Crown Heights is based on an hour-long episode in ‘This American Life’ -- an American weekly public radio show. The program is said to have provided the detailed sketch of Carl King’s long-time quest for justice to free his wrongly imprisoned friend Colin Warner (Lakeith Stanfield). The film opens in April 1980 following the exploits of 18 year old Colin Warner, an immigrant from Trinidad and now a Brooklyn native. We see him steal a car few minutes into the movie and it’s hinted that he had committed other small crimes. However, when the racist NYPD cops force Colin into their car, it’s not for mere stolen properties. He is arrested for the murder of a young man named Marvin Grant, gunned down in his neighborhood. Threatened with extradition, the detectives turn the 15 year old Clarence Lewis (Skylan Brooks) into their stooge to point out Colin as the killer. Soon, the cops find the real killer Anthony Gibson (Luke Forbes) but the DA office and cops remains hell-bent to prove a possible connection between Antony and Colin, wrongly painting Colin as the get-away driver. Despite the legal aid lawyer’s assurance, the flimsy evidence and a predominately white jury seems enough to convict Colin and confine him to a maximum security prison (for  15 yrs to life). 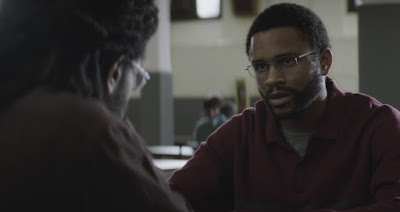 As Colin encounters disturbing violence within the prison, his childhood best friend Carl King (Nnamdi Asomugha) does everything he can to exonerate him. They both find out the harsh truth that the lawyers are willing to put in the bare minimum effort on the case, oft remarking that the judicial system rarely accepts its mistakes, especially in a murder trial. Carl King’s unbridled devotion so as to even learn intricacies of the legal process keeps him from the duties of husband and father. He tirelessly raises money and later spearheads an unofficial investigation of the crime that landed Colin at jail. Initially, Colin has a very tough time inside the prison, his rage against a racist guard brings him bout of solitary confinement. Thanks to strong support of his friend and newfound lover Antoinette (Natalie Paul) – an old neighborhood friend – Colin’s momentary desperation gradually vanishes. He channels his inner rage to study law and excel at GED.
Crown Heights mainly suffers from structural problems which never whole-heartedly realize the narrative in an intimate, human-scale. There are quite a few gripping dramatically coherent scenes, yet for the most part, Matt Ruskin rushes through facts of the story without anchoring a strong emotional context. Anything that has to do with establishment of the characters’ inner life is done through pseudo-poetic flashbacks and montages. In fact, these are so simplistic in its realization that it doesn’t reveal anything insightful about Colin as a person. We are perpetually kept in the dark about Colin’s life before the film’s events and hence his character simply remains as a mirror which reflects miscarriage of justice [or a symbol of inequitable suffering]. Colin’s recitation of the sad line ‘Please don’t let it be a cell’ [as the imprisoned guy’s vivid dreams repeatedly culminates with his realization that he is still inside the cell] would have been more emotionally resonant, had the narrative provided more depth and texture to the character. 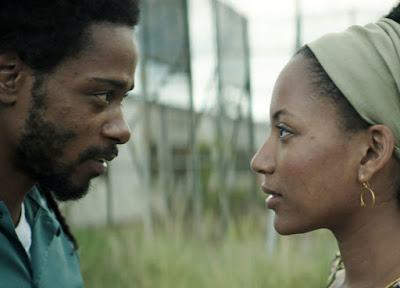 In fact, Ruskin shows the same approach he takes to build up the facts to establish the human emotions. In a subplot, Colin friendship, courtship and eventual jailhouse marriage with Antoinette moves hurriedly, offering only a hazy picture of what brought them together. Earlier, simple montage shots are employed to showcase Colin’s transition from raging prisoner to a bookworm. The narrative boasts rich potential to be an inspiring tale of friendship, but too many subplots, impassioned dialogues, and the hyper-urgency of the narrative only allows minimal glance at this great friendship. One (if not only) particular scene which clearly depicts the connection between Colin and King stands out: when King soulfully laments on his own inner imprisonment (‘it could have been me’). Even as a film that highlights judicial apathy, Ruskin’s narrative lacks the poise and profundity, the only thoughtful scene being the enraging parole debate. Despite such flaws in characterization and narrative, the performances are the saving grace of Crown Heights. Asomugha, the former NFL star, proves to be a brilliant actor delivering the much-needed emotional resonance in some stiff scenes. Stanfield does his very best to explore the character’s conflicted emotions without ever turning Colin into a selfless martyr. Both these actors instill warm emotions into the otherwise cold human-interest story. Eventually, in this era of profound true-crime documentary series, Crown Heights (100 minutes) falls short of directing its righteous fury to produce a deeply humane story.