Children of Men - The Breakdown of Humanity 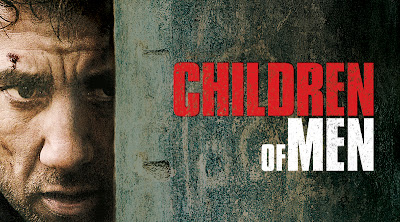 Presenting a bleak, harrowing, and yet ultimately hopeful vision of mankind's future, “Children of Men” is a riveting story tale of potential things to come. The movie “Children of Men” by Alfonso Cuarón, is set in 2027 England, and the human race has grown infertile, which leaves governments all around the world in chaos. The movie is based on the 1993 novel by British mystery writer P.D. James.

Plot
The story begins with Theo (Clive Owen), a white-collar drone in 2027 London. The film quickly establishes that no children have been born in more than 18 years, that the rest of the world is worse off than Britain and that the government's anti-immigration stance has the country on the edge of civil war. Theo was an activist once but has little time for anything except his pain -- until he gets pulled into an attempt to usher young woman named Kee, only pregnant woman and soon he embarks  a countrywide chase in which the goal is nothing less than the survival of the human race.
It's best to know as little as possible about this movie before watching it.The story is so fast-paced that you won't be thinking about this plot or any other.

Analysis
Children of Men indulges some of the most brilliant and dramatic organic displays of cinematographic finesse on screen ever. There's the sequence shot (by  skillful cinematographer  Emmanuel Lubezki) inside a moving car that shifts from jolly humor to sudden murder, chase and escape without a single cut, a harrowing long shot that follows Theo as he moves slowly from a liberated  detention centre into a full-fledged battle zone where rebels and militia are engaged in a  intense firefight. These scenes serves the story rather than distracting it.
The talented film-maker Alfonso Cuaron, creates the most deeply imagined and fully realized futuristic world. The acting is very solid under his direction. Owen is a strong, quiet presence in the film, playing a man who does a lot of perfectly ordinary things to achieve something extraordinary. Michael Caine, relishes the chance to play a wacky and noble character. Julianne Moore plays as a rebel leader, and Claire-Hope Ashitey stands out as Kee, the future of humanity.
Like the best science fiction, it holds a mirror on the present, as seen from the future. This is the world we're making -- poisoned, biologically altered, paranoid and violent." It's hard to describe "Children of Men" as a feel-good movie. Its setting is too demoralized, its palette too bared and its conclusion too mournful for that. Those who care deeply about film-making in all its technical and expressive potential -- will be glad to watch this movie.
Whether approached as a fantastically accomplished aesthetic experience, a fiercely intelligent and satisfying adventure story, or merely as a science fiction movie Cuarón's Children of Men is a formidably distinguished piece of film-making.
Children of Men" morphs into a movie with epic scale, but it's never showy or excessive. Ask yourself at the end: "How many of the good guys even carried a gun?"

Thanks for sharing Arun! Putting this on my watchlist now