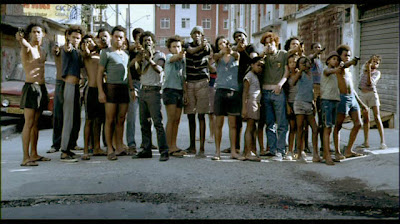 The turbulent teenage gangster drama City of God, directed by Fernando Meirelles is a Brazilian film that represents and portrays the violence and horrors of living within the Brazilian Slums, known as favelas. The slums of Rio de Janeiro – is, at the best and worst of times are hell. One third of the Rio de Janeiro's population are living in these slums. God is nowhere to be found. Poverty is the way of life. Greed, drugs, and violence rule these streets. The ability to use a gun is more important than the ability to read and write.

Plot
Analysis
The film has been compared with Scorsese's "GoodFellas," and it deserves the comparison. The script, adapted from the novel by Paulo Lins, proves tighter than one might feel while watching the finished product. It creates a complex, non-linear narrative construction while maintaining a clear through line, the eventful movie is given a lively dynamic by its constant shifts in focus to foreground different characters.
In addition to shooting style, color is used keenly. Devices such as split screen, slow-mo, jump cuts and whiplash pans add to the visual texture. The machine-gun editing, which makes stylistic transitions to differentiate between the each periods(60's, 70's, 80's). Director Fernando Meirelles has crafted a distinctive motion picture – one takes us into the streets with an unsurpassed intensity and immediacy. Despite the grim, serious nature of the subject matter, Meirelles unearths occasional moments of humor, although they are often of the dark variety.
Director Meirelles cast the film largely with non-actors, mostly young males, who were discovered in the various slums around Rio de Janeiro in an extensive and non-traditional casting process.The violence in City of God isn't glorified, but is extreme and shocking, even though there is virtually no blood. Death is no respecter of age in the slums of Rio de Janeiro. The immediate goal of a seven-year old homeless boy is not finding a family or a friend, but finding a gun.
The message of the movie might be, that, in a culture where violence begets violence, only the names change. When one gang lord is deposed, another will rise in his place. And, as often as not, it's the children, more than the adults, who have to be watched.
Trailer:
City of God - Imdb
at January 09, 2012
Email ThisBlogThis!Share to TwitterShare to FacebookShare to Pinterest
Labels: Based on True Story, Hard-Hitting Movies, IMDb Top 250, Latin American Cinema, Social Drama

Love the way you write about movies that I don't know about..will come back for more!

remains one of my All time favorites! As you rightly pointed out, for Cinematic brilliance, creativity these movie will surely remain in all time top 10! I started writing about this movie almost couple of years ago and that article is still incomplete. I am glad to read this post..kudos to you !!

Great to read your take on such a great movie from Brazil. Another great one from there is CARANDIRU. Highly recommend it. Also CENTRAL STATION, very moving. Keep giving us more reviews.

Excellent movie:).One of the best ever made:).