Forrest Gump - A Film Above Words 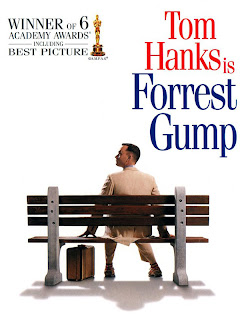 "Life is like a box of chocolates, you never know what you're gonna get." Ever find the day-to-day struggling in life threatening to drag you down? If so, there is a movie named 'Forrest Gump', which can refill your energy. It could be a cure for your tired spirit. It has sensitivity, honesty, realism, tragedy, heartwarming humor and has something substantial to say about the human condition. It also has incredibly gifted actor 'Tom Hanks.'


Plot
The story is about our character, Forrest Gump, with a relatively low IQ. His mental impairment doesn't seem to bother him, his mother, or his best (and only) friend Jenny. In fact, a limited understanding of the world around him gives Forrest a uniquely positive perspective of life. He goes through many phases in his life and through many historic events. He gets popularity by mere accidents. He is sent to fight in Vietnam, play Ping-Pong in China and do shrimp business on the Pacific. He emerges successful in every bit of his life, but except in the field of love. She is never far from his thoughts, no matter what he's doing or where he is. The movie always moves with a mix of emotional and humorous stuff.

Gump is one of the early movies to showcase the possibilities of CGI (computer-generating images), demonstrating that it isn't just science-fiction films that benefit from advanced computer technology. From the feather that floats down from the sky to the news footage of Forrest with presidents and newsmakers, Gump shows that a whole new kind of story can be told -- and instead of looking to the future, as many films using CGI do, Forrest Gump looks into the past and examines the relationship with it.

Life is unpredictable and throws things at us that we are not ready for, but we have to work with it and move on in life.

One of the greatest movies.
I really wish they would have also adapted the the second novel 'Gump and Co.', and made a sequel to it.
If that would have happened then the funny and best shot would be when Forrest Gump would meet Tom Hanks, in the story. It would have been fun to watch Tom Hanks playing himself ad well as Forrest Gump, in the same scene. :)

One the greatesttttttttttttt movie ever made
terrific screenplay and TOM HANKS is chance less !
Humor,philosophy everything in right proportion !
Glad to read about it !
DeePaK

One of the best movies i have seen:). Keep up the good work:).

The best movie I have seen till date. Truly should be seen by Everyone atleast once.

"Your blog is like a box of chocolates,I got this best one Arun."

Thanks for sharing with us