V For Vendetta - The Power of Truth 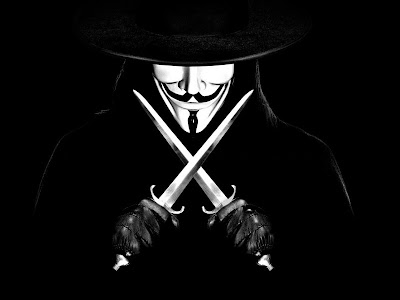 V for Vendetta is a visually grand mixture that combines political allegory, bloody action, and a few stunning cinematic moments into a solid piece of entertainment. It is a  adaptation of the comic series V for Vendetta concieved by Alan Moore, and the movie is written by Wachowski brothers, who gave us Matrix.

Plot
V for Vendetta is the story of one man’s fight to atrocities that were brought down on a future society(2020, England), that is held captive by a corrupt government. V(Hugo Weaving), the masked avenger, was tortured and held prisoner for years, before an explosion and fire set him free. Hiding his scars behind a mask and gloves, he sets out to kill those involved in the mass genocide of his country. One by one, people begin to die. And caught in the middle is Evey(Natalie Portman), a young woman who is rescued by V, then whisked away to his secret underground lair. She is both terrified and fascinated by the man in the mask, by his plight and firm convictions that those who committed crimes against humanity must die. A cynical cop(Stephen Rea) is entrusted with the duty of stopping V and finally realises the uselessness of ignoring V’s message to mankind.

Analysis
Hugo Weaving as (V) gives a Brillant performance though his face was never seen in the movie. He hides behind a mask that always has the same smiling expression. Dialogue delivery is one of Hugo Weaving's strengths and he does an excellent job in this. Natalie Portman is solid, and particularly good during the torture scenes and their aftermath. Portman’s Evey has expressions enough to  morphs from a dutiful citizen to V’s sympathizer, and the film is populated with a number of gifted character actors.

There are plenty of ideas in the Wachowski brother's writing. The movie asks questions about the price we're willing to pay by giving up freedom to feel safe , and argues that the term "terrorist" is defined by perspective. From a visual standpoint, V for Vendetta bears the trademarks of a comic book-to-film adaptation: rich images, deep shadows, and strong iconography. Director McTeigue ensures that the human element is not lost, by dragging a naive girl(Evey) into the brutal struggle.

This is actually a very daring film and wake-up call not just for the West, but for the world. It’s a premonition of things to come, if we allow our governments to scare us into give-up our freedom on false promises of security. We believe, rather naively, that we are a free society and our governments are run by us. Some of us even believe we do not have to worry about politics and leave all that to the government, believing them to have our best interests at hand. After all, we have a hundred million other things to worry about, our bills and debts, our children, our food, cricket, movies, TV channels. When a government gains more power than the people, corruption begin to set in, civil liberties begin to diminish. People who do not take the responsibility of the condition of their country, are a doomed people.

That is how, Germany, one of the most liberal societies in the world, became a tyrannical government under Hitler. In the movie, V doesn't reveal his face. May be the mask tells us, it could be anyone...you or me or any other person, and we all have the power to change things.
As told by V, A man can die, but his ideas are bullet-proof.


“Artists use lies to tell the truth, while politicians use them to cover the truth up.”

"You wear a mask for so long, you forget who you were beneath it."

hey that was such a nice review about the movie...

i was expecting you will mention about the month that V keeps repeating in the movie...i guess it was September but not sure .. ive seen it long ago...

but it was a masterpiece...

ive subscribed to your posts buddy....

Thanks for ur comment Rahul. V mentions the month of November in the movie.

"Remember, remember the 5th of November. The gunpowder, treason, and plot. I know of no reason why the gunpowder treason should ever be forgot."

I rmember watching the film some time ago and had liked it too.

In line with the plot of this film sooner or later our India may be in need of ( or already is it badly in need of !)V, given the Corporate friendly government caring only their bosses and leaving the rest to meet their doomsday.

Remember Remember August 15... i suppose,Freedom is one big fat lie diplomatically used by the rulers to sedate their people and keep them in a dreamy world(making them to believe that they are free while they're actually not!)