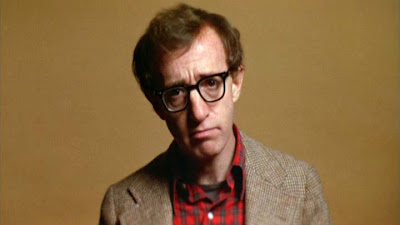 Multi-Oscar-winning and still amazingly prolific, Woody Allen is one of a handful of American filmmakers who can truly wear the label 'auteur'. Woody Allen remains one of the truly great figures in American humour and American cinema. In a circumstance unusual for Hollywood cinema, Allen wields a notoriously tight control over all aspects of his work – casting, writing, shooting and editing – and, beyond this, is so glorified that he is not required to submit a script for studio approval.

Woody Allen's Quotes :
"I'm not afraid of dying . . . I just don't want to be there when it happens."
"There are worse things in life than death. Have you ever spent an evening with an insurance salesman?"
"The two biggest myths about me are that I'm an intellectual, because I wear these glasses, and that I'm an artist because my films lose money. Those two myths have been prevalent for many years."
"Most of life is tragic. You're born, you don't know why. You're here, you don't know why. You go, you die. Your family dies. Your friends die. People suffer. People live in constant terror. The world is full of poverty and corruption and war and Nazis and tsunamis. The net result, the final count is, you lose - you don't beat the house."
"If my films don't show a profit, I know I'm doing something right. "
Woody Allen is known for revolutionizing the comedy film genre in the 1970's. Among the innumerable fine aspects of Woody Allen's films is the fact that he takes his inspiration from various forms of art - film, painting, philosophy, opera, poetry, music and others.
When asked if he wanted to achieve immortality throubgh his work, Woody Allen famously commented that he wanted to achieve immortality by not dying. At 76, Woody is as active and relevant as he's ever been at any point of his career. Maybe Mr. Allen will achieve his goal of immortality after all.
Woody Allen - Wikipedia
at January 08, 2012
Email ThisBlogThis!Share to TwitterShare to FacebookShare to Pinterest
Labels: Hollywood Movies, Masters of Cinema

Happy to meet another Woody fan.

I watched 'Midnight in paris' recently and had a thoroughly good time:) Woody Allen is that kind of magician!