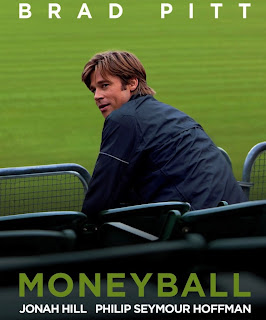 “Moneyball” is a crowd-pleasing baseball movie for people, who don’t know baseball or like baseball movies. The mark of a truly great sports movie is one that appeals to people who don't like sports. It is such a film joining the likes of  Million Dollar Baby as a movie to be enjoyed by everyone. Baseball is the quintessential national game of America, with its own built-in traditions, but it is also a cut-throat business where change and innovation are important.  Moneyball is about fixing your life, changing course, reassessment, and reinvention.

Plot
It centers on the character of the Oakland Athletics' general manager Billy Beane (Brad Pitt), who after a bad start as a  player, moved over to management and was driven by his hatred of losing. In his previous season, he'd taken the Oakland A's to the World Series, only to have them lose and see their best three players hired away by richer teams offering much bigger salaries.
Faced with rebuilding the team at bargain basement prices, Beane became persuaded by the theories of Peter Brand (Jonah Hill), a nerdy recent Yale graduate who grinded numbers to arrive at a strict cost-benefit analysis of baseball players.
He persuaded Beane that he should hire based on key performance statistics that pointed to undervalued players. Together, they assembled a team that seemed strong at first, but during the course of an agonizing season, proved itself the biggest bargain in baseball.
Analysis
In this compelling adaptation of Michael Lewis’ “Moneyball", Brad Pitt as Beane gives perhaps his smartest, subtlest performance ever. His Beane is a man at war with himself. He’s as superstitious as any baseball fan — he won’t watch his Oakland A’s play. He's basically the guy next door, even though one with control over a Major League baseball team. It won't be a surprise, if Brad Pitt is nominated for a Oscar. Jonah Hill, who steps out of his safety zone of comedies and away from his stereotyped image to take a dig at a serious role. Supporting cast with Philip-Seymour Hoffman is very solid.
Director Bennett Miller's movie feels like a curious outsider’s view of the game and this “system.” And that’s a great thing.
The great fun of "Moneyball" begins as we watch Beane and Brand assemble, in classic "Seven Samurai" fashion, a team of unwanted players. “Moneyball” could be compared to “The Social Network,” and they both are undeniably  long, leisurely, detail-rich stories of Information Age revolutions with long-lasting effects.
At 133 minutes, it’s a bit too long, and it has a bit shakier docudrama approach. Moneyball weaves toward the end trying to find the right stopping point. But it’s an honorably crafted movie spectacle with a generous spirit and enormous popular appeal.
In short, Moneyball is a thinking person’s baseball movie, and a baseball fan’s thinking movie.
Trailer:
Moneyball - Imdb
at January 15, 2012
Email ThisBlogThis!Share to TwitterShare to FacebookShare to Pinterest
Labels: Hollywood Movies, Social Drama

will give a try :)
DeepAk

I thought of seeing this and then missed it, its off the screen by now.Waiting for the DVD