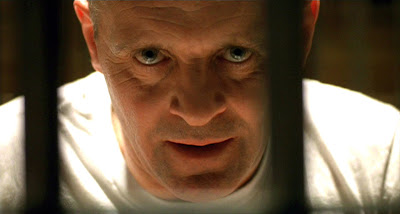 "A census taker once tried to test me. I ate his liver with some fava beans and a nice chianti." The Silence of the Lambs" is a sensational and creepy movie.The most exciting presence in the film is Anthony Hopkins as Dr. Hannibal Lecter, the brilliant, imprisoned cannibalistic psychopath. It's the kind of movie you can't wait to tell people you've seen ... and survived. The story for this movie, taken from the book of the same name by Thomas Harris.
Plot
A serial killer named Buffalo Bill (Ted Levine) is on a killing spree, kidnapping and murdering young women. Clarice Starling (Jodie Foster) is a young, upcoming FBI agent who is assigned to the Buffalo Bill case. Her boss sends her to meet with psycho serial killer Dr. Hannibal Lecter (Anthony Hopkins), a psychological genius that he hopes will give her insight into the mind of Buffalo Bill.
Dr Hannibal Lecter has been kept in a dungeon-like cell for eight years, and while doctors and investigators can get nothing out of him, he is willing to help his attractive new inquisitor. Because of her inexperience and honesty, Hannibal takes a liking to Clarice and begins to slowly feed her information to help the FBI apprehend Buffalo Bill. The movie is propelled forward with clues from Hannibal as the FBI races against time to find Buffalo Bill before he murders his latest victim.


Analysis
Director Jonathan Demme  wonderfully pulls off something as menacingly coiled as "The Silence of the Lambs." But he does much more than pull it off; he nails it cold. The director doesn't give an inch; at the same time, he doesn't give in to routine slasher tactics. As in the best tradition of great horror-thrillers, what he leaves unseen is absolutely petrifying. Both actors(Foster and Hopkins) are truly outstanding, with Anthony Hopkins in particular creating an icon of modern cinema with his portrayal of Lecter. It's important to mention Clarice(Foster) without noting that she is one of the rarest commodities in thrillers: a female hero. The film wouldn't have been the same without her. She is our point-of-entry into the twisted, grotesque world of murder, insanity, and decadence.


Watching this movie, I felt like I was a part of it. The way that Hannibal feeds the clues to Clarice and she slowly deciphers their hidden meanings was perfectly timed and executed. There are no car crashes, traditional chases, or stunts, yet the level of suspense remains high. For this, the credit must go to everyone involved in the production, from the director and actors to the technical staff.
The look and feel of the movie helps to solidify our involvement in the plot. There is absolutely no gratuitous violence – although some of the scenes are extreme, on every occasion it is certainly justified by the story.
Before her first meeting with the not-so-good doctor, Clarice is cautioned by Crawford, "Don't tell him anything personal. You don't want Hannibal Lecter inside your head." But that's just where this movie puts him -- right in the cinema's dark collection of legendary psychos. And that's exactly where he belongs.

"The Silence of the Lambs" gets under your skin and in your head.


The Silence of The Lambs - Imdb
at January 01, 2012
Email ThisBlogThis!Share to TwitterShare to FacebookShare to Pinterest
Labels: Hollywood Movies, Horror, IMDb Top 250, Thriller

My all time Favourite movie.Anthony Hopkins rocked in this movie:).

Anthony Hopkins, no doubt got into my head too. AFI has rightly listed him as the number one villain.
What a movie ! Loved it.
But then the other movies in the series failed to keep up with this epic one.

It was good to read and remember this movie that I had seen so many years ago!

Loved both the book and the movie....