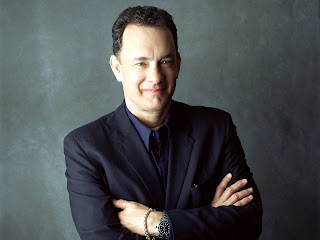 If you haven’t seen Tom Hanks movies, you have really missed out something in your life. Tom Hanks is not a show stealer like Robert De Niro or Al Pacino , no can one imagine him doing a violent gangster. He is not a dead drop handsome guy, who can make the girls go crazy, like Tom Cruise or Brad Pitt or George Clooney. Nor is he a top action hero like Sylvester Stallone or Arnold or Statham. But yet that’s where Tom Hanks appeal lies, as the guy next door, he is some one every one of us can relate to. He has been the most after-sought actor by audience allover the world and  by the movie critics.

Tom Hanks has played a wide variety of roles, from an AIDS victim( Philadelphia) to a war weary Captain ( Saving Private Ryan) to a gangster ( The Road to Perdition) to a FED agent ( Catch Me If You Can) to a refugee on an island ( Cast Away), and not one role is similar to another. A good actor’s performance is rated by his choice of roles, films, his body language and his ease to carry the character throughout the film. Hollywood is a world, where 9 out of 10 actors, try to put their best in the films and competition is gruesome. But still, he is one of the rarest actors, who can bring the mood of the situation with his voice.
Tom Hanks, undoubtedly a versatile acting genius, is deserved to be in the Hollywood Hall of Fame.
Memorable Movies : Forrest Gump ( OSCAR ), Cast Away, Saving Private Ryan, Apollo 13, The Terminal, You’ve Got Mail, Philadelphia ( OSCAR ), Road To Perdition, The Green Mile, Big, Toy Story, Charlie Wilson's War.
Tom Hanks - Wikipedia

at January 12, 2012
Email ThisBlogThis!Share to TwitterShare to FacebookShare to Pinterest
Labels: Hollywood Movies

Can never Forget Hanks' Breath taking act in CAST AWAY!

One of the greatest actors.
He may not be the show stealer like De Niro or Pacino but he is a great actor.
The kind of roles he has played throughout his career are breath taking.

You have already used the one word that best describes him.. "Versatile".. in the true sense!!

definitely a superstar , loved his role in Cast away :)
nice post :) keep blogging :)

do visit my blog :
http://campbuzzz.blogspot.com/

Chapters From My Life said...

My most fav actor... No one else could have made 'The Terminal' such a great movie.

Very true... One of the most versatile actors we've come across. He's not famous for no small reason. But his versatility, flexibility and adaptability have made him a renowned and respected one...

my fav. CAST AWAY ...
no Forrest Gump
no Green Mile
no Catch me if you can...


brrrrrrr...i can list down all his movies...such a versatile actor...

this blog was more fun to read about him here then on wiki :P

A wonderful tribute to a great performer. Two actors, for me, whose films can be watched without any hesitation are Tom Hanks and Johnny Depp. Your post captures the genius of this man very comprehensively. Wish you and your readers a wonderful festive weekend.