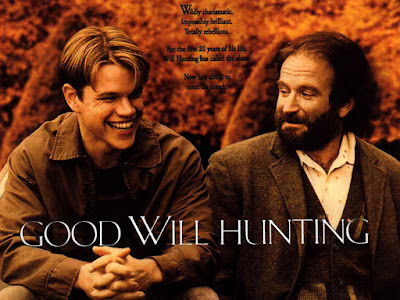 Plot
When big-shot professor Lambeau ( Stellan Skarsgard) presents a math challenge to his students, with a fine reward to match, Will(Matt Damon) anonymously solves the formula on a blackboard placed in the school's corridor. Lambeau begins a search for the mysterious student, and upon finding Will takes him under his wing. It's the only way for Will to get parole after a number of run-ins with the law. Lambeau makes two conditions: that Will meet with him once a week for a math session and that he begin therapy.
A succession of psychologists tries to reach Will, using various techniques (including hypnosis), but he won't cooperate. Finally, Lambeau summons his old, alienated classmate, Sean McGuire (Robin Williams), a community college instructor and therapist --- and the real drama begins.

Analysis
Most of the narrative consists of intense one-on-one sessions between Will and Sean, two equally stubborn, equally wounded men. ``Good Will Hunting'' becomes a poignant, embracing drama of hurt, scared humanity learning to reach out. The outcome of the movie is fairly predictable; so is the whole story, really. But meeting expectations and following a familiar path aren't always bad things in a movie, provided the film accomplishes those goals with a infinite amount of style and an attention to detail. Good Will Hunting does both.
Trailer:
Good Will Hunting - Imdb
at January 03, 2012
Email ThisBlogThis!Share to TwitterShare to FacebookShare to Pinterest
Labels: Feel Good Movies, Hollywood Movies, IMDb Top 250

This was a really good movie. Both Matt Damon and Robin Williams delivered great performances.

This, I think, is the best work of Gus Van Sant(including Milk). Thanks for writing a superb analysis.

Loved it, the story was so fresh and alluring.
No doubt that Ben Affleck and Matt Damon got the Academy Award for Best Original Screenplay.
And hats off to Robin Williams.

This movie was intense, thoughtful, inspirational, had realistic characters (a very significant difference from the majority of Hollywood) and entertaining (even when I saw it for the first time when I was in middle-school I was engaged).
This movie deserves every accolade and praise it gets and thank you for giving it much-deserved attention and an excellent review!

alright, added to my list of downloads .. i recently watched good fellas .. worth a watch .. do watch it if you get a chance