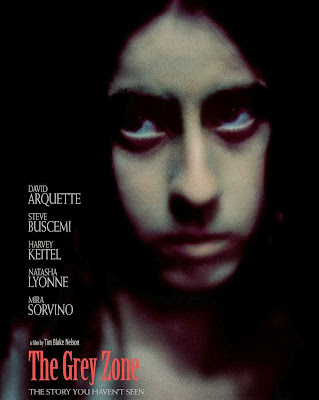 Claude Lanzmann, the director of painstakingly detailed Holocaust documentary, “Shoah” once said that the Holocaust should never be re-created or dramatized for the sake of a movie. But, movies like Spielberg’s “Schindler’s List” or Roman Polanski’s “Pianist”, says that not memorializing those lost lives is equivalent to denial. “Pianist” and “Schindler’s List” are masterpieces in its own way, but these two and most of Holocaust movies are a ‘light-at-the-end-of-the-tunnel’ kind of movies, because an accurate portrayal of a life in Auschwitz camp might be too revolting to make and too excruciating to watch. Also, repeatedly pondering over Holocaust with various hybrid drama varieties somehow diminishes the impact of those gruesome events. However, when I saw the smokestacks in Tim Blake Nelson’s “The Grey Zone” (2001), it dawned on me that there are still ‘must-be-said’ events of the worst human atrocity.

Miklos Nyiszli is a Hungarian Jew, who served as the Auschwitz camp’s doctor. He served under the execrable doctor ‘Josef Mengele.’ Miklos’ memoirs were found buried in the Auschwitz camp. “The Grey Zone” is partly based upon the memoirs and tells the tale of the twelfth ‘Sonderkommando’ – a word corroborated by Germans to describe those Jews who collaborated with the Nazis. The ‘Sonderkommando’ have few privileges, and in return they should do the haunting act of marching their fellow Jews to the gas chambers and crematoriums. 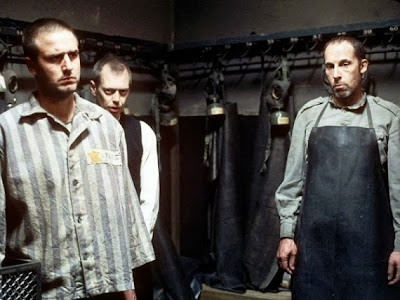 Time is a trapped thing for a ‘Sondderkommando’, since there is nothing to differentiate one day from another. They pull gold from teeth, burn or bury the stack of corpses. History has judged them to be traitors and inhumane, but director Nelson’s question to those who say, "I would never have done that!” is “How can you ascertain what’d you do to stay alive?” The twelfth Sonderkommando’s, in 19944, have worked four months in their duty – considered to be longer than any previous unit. The members of this unit are planning an armed uprising, by stocking some explosives and guns. The arms are smuggled by woman co-conspirators (Mira Sorvino and Natasha Lyonne) through the dead bodies of women, who worked at munitions factories.

Renegade Jews like Hoffman (David Arquette), Schlermer (Daniel Benzali) and Rosenthal (David Chandler) are planning to blow-up the crematoriums. One day, a 14 year old girl is discovered in the gas chambers, who have survived the gassing. She is revived by Dr. Nyiszli (Allan Corduner). For the Sonderkommando’s, the girl represents their need for redemption and so obstinately refuse to let her die, even when the Nazi camp commander Muhsfeldt (Harvey Keitel) learns about the girl’s presence, or even when it endangers their lives and rebellion. 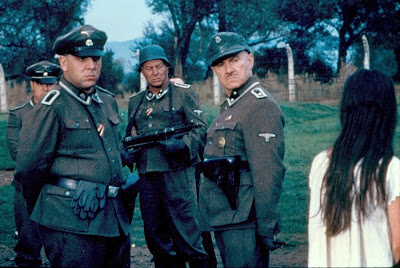 Blake Nelson’s atypical Holocaust take was taken only on $5 million dollars, in Bulgaria. In there, two crematoria were re-created based on the plans used at Auschwitz. Nelson is also veracious in depicting the Holocaust by denying any possibility of hope. One of the characters enunciates, “You're dead either way. It's just a matter of how." Dialogues like these are written to remind them about humanism in this inhuman existence, rather than to provoke heroism. The film based on a play, Mr. Nelson wrote, so at times it tends to get a bit talkative, but he brings out scenes, which might make a viewer to avert their eyes. Hoffman beating t a condemned man for a watch and a vicious torture sequence are some of the graphic imagery. You don’t see shooting or torturing sequences, but those screams will fire up your imaginations. The movie doesn’t have a finale or an opinion. It makes you think about the morals and meaning of life without any distractive epilogues. 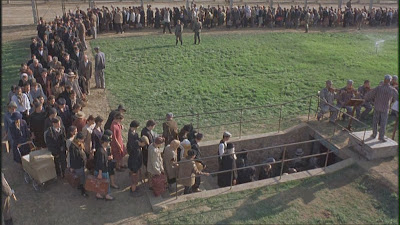 The cinematography (by Russell Lee Fine) perfectly freezes the shades of grey. In the smokes of crematoriums, in the dingy uniforms and in the every surface of the camp, grey settles in, giving the film a persistent authenticity. The exigent crosscutting and uncomfortable close-up shots adds something to the viewer’s anxiety. Nelson has amassed a known Hollywood cast, but their presence doesn’t capsize the film. All of the actors have a relatively small role to play but they do their best to heavily lift the characters. Harvey Keital, who himself is Jewish plays a German officer. Arquette and Chandler’s low-key performances makes raises all manner of frankly unanswerable questions.

Life of a ‘Sonderkommando’ was just a footnote in history books, but “The Grey Zone” gives a face to them and makes us witness everything and leaves the morality for the viewer to decide. Don’t seek for solace or hope in this tale. It is made to remind us about the abhorrence and inhumanity.

I should definitely try to watch it :)