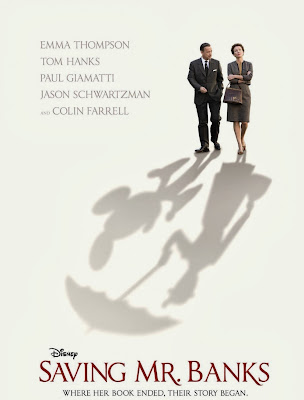 Writing a fiction isn’t just a technical process. The writer usually blends in with the characters he creates and develops a strong bond which is as equal to any flesh and blood relationship. In the case of author PL Travers, the adherence is so strong, since the characters and scenarios reflect someone from the past. So, how would Mrs. Travers feel about a movie, which brings her fictionalized personal memories into big screen? She would hate it very much, even though she was pursued for 20 years by the ever-smiling Walt Disney himself. What happened to Mrs. Travers’ resistance in the end is known to all. Travers’ “Mary Poppins” was eventually made into a movie in 1964 and has since then attained a classic status. But, what happened behind the scenes, when a less-cheery and determined Travers flew to Hollywood to meet with Disney and his team? That engaging ‘making of’ process forms the narrative for John Lee Hancock’s “Saving Mr. Banks” (2013), which gains an irresistible appeal by its two stars.

“Saving Mr. Banks” was made by Disney Pictures and so you can be sure that it offers a tidied-up glimpse of Disney entertainment machine. Walt Disney himself had a reputation for fervently protecting his legacy and brand. John Lee Hancock doesn’t contradict with Disney’s image of eternal optimism, but at the same time, he provides a mild criticism on Disney’s methods by indicating his distinctive feature of employing catchy songs to soften the sharp edges of legends and fairy tales. “Mary Poppins” was one of Disney’s most expensive live-action films (at that time). Mr. Disney had an uneven record with live-action fares, but this movie eventually turned out to be one of the most beloved and lucrative. 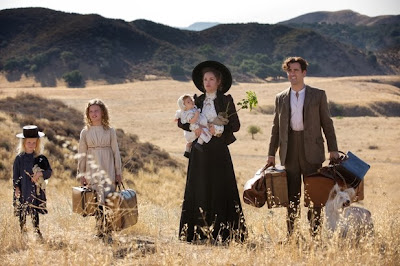 As the movie opens, we hear the hushed tone of a girl, uttering “Wind’s in the east, mist coming in / Like something’s a-brewing, about to begin ....” The eight year old girl named Helen Travers or Ginty or Pamela (Annie Rose) is sitting underneath scorched skies and palm trees in rural Australia, 1906. From then on, the story unfolds as two simultaneous stories: one has Mrs. Travers in Hollywood land; another feature the unstable childhood of Travers. The little Helen Goff (or Mrs. Travers) lives in a ramshackle home with her father, Travers Goff (Colin Farrell), a charming but an alcoholic ne'er-do-well banker. He dotes on her daughter and insists her to never abandon the dreams. Mother Margaret (Ruth Wilson) remains tepid about her husband’s alcoholism and is highly burdened with a job of raising three daughters (a five year old and a toddler).


When the story cuts to 1961, we witness that Mrs. Travers (Emma Thompson) is having some financial problems, since her book sales has come to a halt. For 20 years, she has resisted the charms of Walt Disney (Tom Hanks). Disney’s daughters have loved the book and he has promised them that he would make feature film of it. As a final attempt, Disney has Mrs. Travers flown to Los Angeles to convince her to sell him the rights for the book. However, the sharp-tongued Mrs. Travers first insists that “Mary Poppins” shouldn’t be a musical and is strictly against the use of animation. She consistently torments her screenwriter DaGradi (Bradley Whitford) and the songwriting/musician Sherman brothers (Jason Schwartzman and B.J. Novak). She disapproves Disney’s attempt at cuteness and even insists that their script conferences be recorded. The only thing she acknowledges in Hollywood Is the hospitality and friendliness of a driver (Paul Giamatti).  Eventually, Mrs. Travers yielded but portraying the difficulty in that process is what makes this a commendable film. 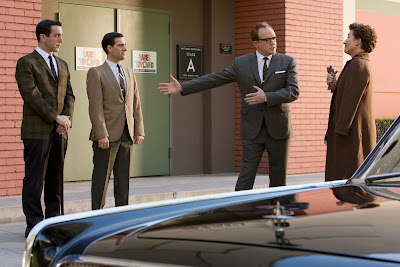 How much of what we have seen in “Saving Mr. Banks” is true is questionable, but that doesn’t matter, since this movie isn’t about Walt Disney or Travers. It’s an evergreen tale of artistic clash – between motion pictures and books. It also explores how an author’s relationship with characters makes them to see a film-maker more as a businessman than as an artist. Kelly Marcel and Sue Smith’s script would have had the emotional heft, if not for the extensive flashbacks. Without the back-story, we might view Mrs. Travers as an overweening elderly lady. There are also no commonplace traps in the script, which might have it maudlin. Director Hancock (“The Blind Side”) is sometimes too eager to tweak our heartstrings, but overall maintains the lighter tone and brings out the gumption of creative people along with their spirit of self-invention. There are few bumps, here and there. Nonetheless, the solid acting of a great ensemble takes your attention away from pondering over the flaws. 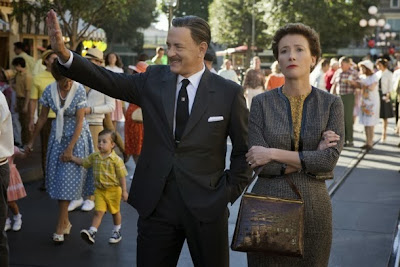 Even a little twitch of Thompson’s eyebrows conveys her characters’ stiffness. She’s funny without causing annoyance and in the last few scenes, she proves us that why she is known as a ‘classy performer.’ Thompson’s tears after the crumbling of the thawing resistance build a rich empathy towards Mrs. Travers. Tom Hanks in the supporting role of Disney once again reminds us how great an actor he can be. He doesn’t look like Disney but captures all of his folksy charisma and showcases him as an honest and kind daddy than as a movie mogul. Hanks bring in more depth to this master of persuasion, especially in the monologue, explaining about the power of storytelling. The performances of supporting players like Paul Giamatti and Colin Farrell elevates this film from being an ordinary "based on a true story" tale.


What happened in the real life of Mrs. Travers is somewhat more complicated than what is depicted here, but the version shown in “Saving Mr. Banks” is more powerful, seductive and crowd-pleasing. As the Disney’s song itself says, “A spoonful of sugar really does help the medicine go down.”