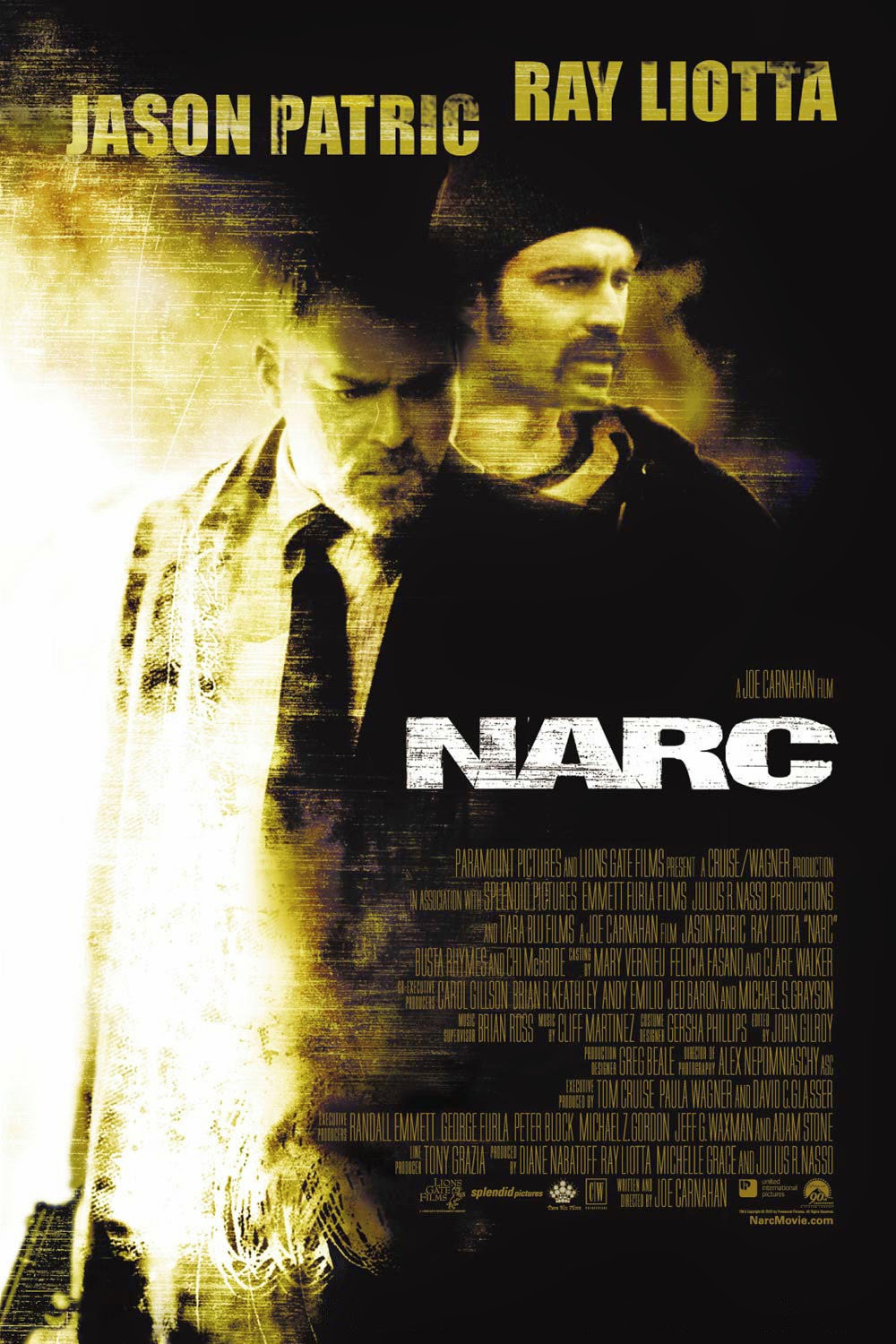 Director Joe Carnahan’s “Narc” (2002) has all the grit and violence to attain the ‘straight-to-video’ status. It was filmed with energy and bravado, but since it didn’t have a millions of dollars as budget, it became a tough sell to the masses and eventually got a limited theatrical release. “Narc” is better than a regular buddy cop thriller and it wears 70’s tough authenticity of the police flicks, as seen in “Serpico” (1973) and “The French Connection” (1971). Carnahan’s rough-hewn film-making style borrows a little from diverse sources such as Martin Scorsese, Quentin Tarantino. The plot is straightforward and simple, but the script is tightly written, which makes the film to rise above the generic roots.

The film opens with a nauseating, hysterical hand-held foot chase as undercover cop Nick Tellis (Jason Patric) chases down a psychotic junkie, scrambling over the fences and through the projects. The chase comes to an end, when the junkie pus a knife to child’s throat. Tellis has already lost one innocent bystander to this junkie, so without thinking he fires the gun incessantly. The junkie gets hit in the head. The child is not injured, but a stray bullet hits the kid's pregnant mother, filling the pavement with blood. Following the shooting incident, Detroit narcotics officer Tellis is sent off the force for nearly 18 months. Tellis also went through a rough detox program as his wife pregnant stood by him. At home he broods over his infant son. The restless Tellis was given an opportunity by homicide captain Cheevers (Chi McBride). 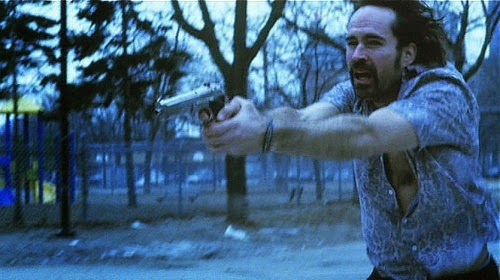 He has to solve the murder of undercover officer Michael Calvess (Alan Van Sprang), a crime that has no single lead. Tellis’ wife is once again afraid that he will put them through a private hell, but he eventually agrees to investigate the cop murder. He also asks for Calvess’ devoted ex-partner Henry Oak (Ray Liotta) to share the case’s burden. Oak has 93% conviction rate but also known for his short temper. We follow the course of investigation as the detectives move through a unimaginably dingy crack house, where a pathetic junkie has inadvertently vaporized his own skull with a shotgun, while trying to use it as a bong. We also get to know about the straining relationship between Tellis and his wife, and also about Oak’s personal sad story. 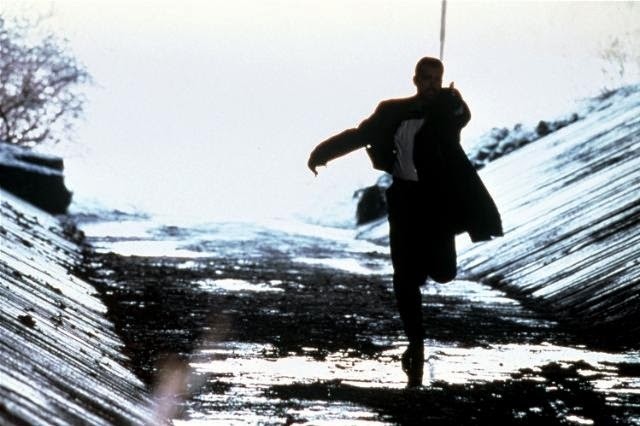 Viewers who have seen lot of cop TV shows and movies are liable to feel themselves like law officers, easily recognizing when and why someone is lying. The story of ‘Narc’ looks similar to these TV shows, but the gripping script keeps you guessing and care about the characters. Ultimately, you might feel less about the why’s of the investigation and concern more about the responses of the two central characters. Contrary to Hollywood’s buddy cop formula, Tellis and Oak never fits together. One guy ready to chuck out rules for justice, while the other play by the rules, even though he is battling the drug demons. The swaggers of the police investigations are stripped down because mainly the script never forgets about its characters’ vulnerability. Carnahan imbues a lot of energy through smacks of stylish film-making tricks. He uses the stark, colorless wintry climate of Detroit to reflect the fuzzy mindset of Tellis. The hyper-stylized techniques, as seen in Oliver Stone’s movies, never threaten to overwhelm the story and characters. Nonetheless, Carnahan could have kept down some of the repetitive flashbacks, visual stress and the constant emphasis. 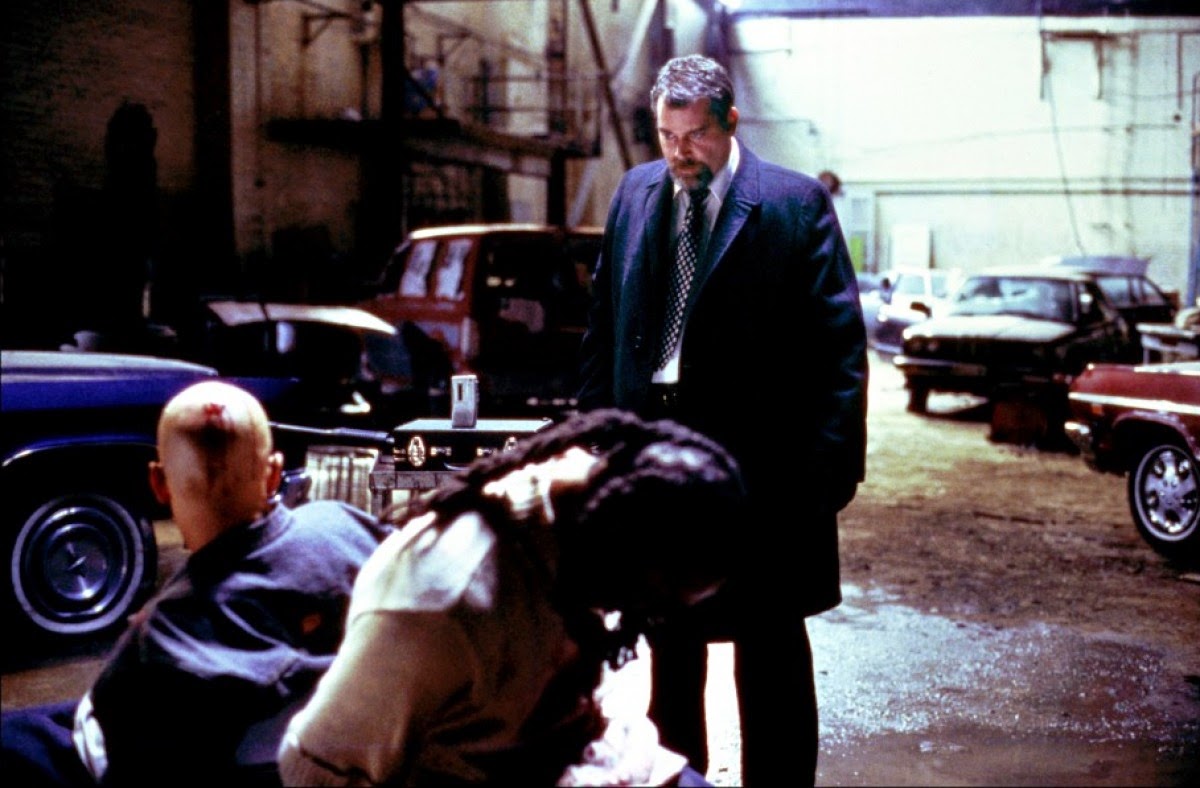 Both Patric and Ray Liotta sink their teeth into such complex characters. The understated edgy portrayal of Patric is riveting. He fills Tellis with a boiling anxiety. Liotta, who is often seen in nonsensical B-movies, gets a good role and he happily tears into it. He exudes the unstable state and frustration that comes with investigating such violent crimes. The lack of a solid conclusion (ends with an ironic close-up of a tape-recorder, where the truth may or may not be captured) may leave the viewers wanting more, but those who only expected a explosive buddy cop movie will be immensely satisfied.

“Narc” (105 minutes) effectively transcends the cop thriller genre and is never afraid to take us into darker truths. It’s worth a watch for its multifaceted character and deeply felt performances.

Narc -- IMDb
at May 23, 2014
Email ThisBlogThis!Share to TwitterShare to FacebookShare to Pinterest
Labels: American Indie Films

Nice review. Not my kind of movie, but liked the way you have written about it.

Narc is probably my favorite cop movie. I usually don't dig cop thrillers, but this one is just amazing. As a film critic, it's my honest and humble opinion that the acting between Ray and Jason when they're outside at their car (arguing and fighting, it gets bloody) is the best acting I've ever seen. Pure genius. Great write-up.

@Grimm, Thank you. Liotta and Patric are the perfect actors for the role. The twists and turns in the tale intrigued us mainly because of the two primary actors.

Looks interesting. Have never even heard about it but i Like Ray Liotta films, so i'll watch this soon

@ Haricharan, Narc is a underrated cop thriller and also one of the rare good movie from Ray Liotta