The Name of the Rose -- An Absorbing Atmospheric Thriller 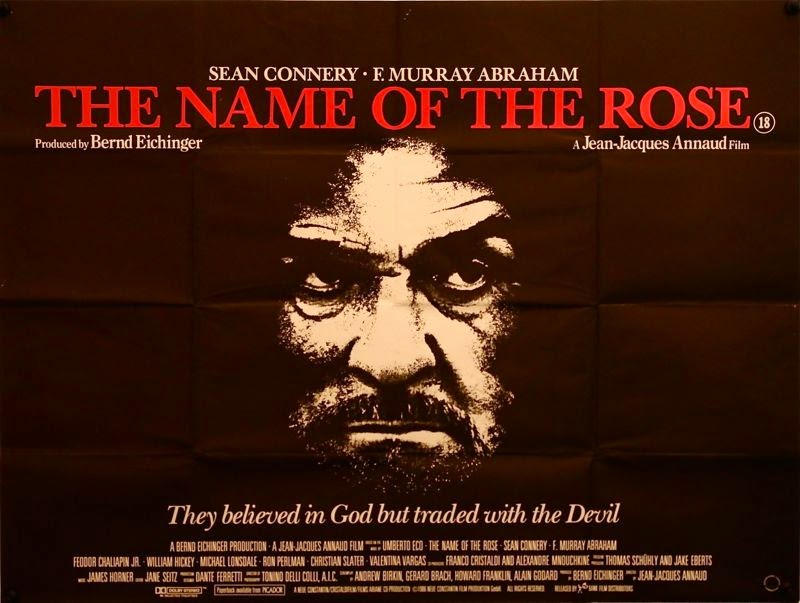 Italian professor and journalist Umberto Eco was very much surprised, when his first novel, in 1983, went on to become a best-seller. It is surprising because his novel didn’t have any middling story that was set out to please the readers. It was set in 1327, in a remote Franciscan abbey. But, what might have drawn the readers must be the murder/mystery, placed at the crux of the novel. However, as the main character Brother William says “The mystery is elementary”; what’s great about Eco’s novel is the exploration of European society, which was on the brink of a religious and philosophical change. It was an immense pleasure to delve into Eco’s historical background of the medieval churches. Director Jean-Jacques Annaud’s adaptation of Eco’s novel, “The Name of the Rose” in 1986 mostly pushed the historical significance to the background and concentrated on the mystery to make it as a labyrinthine Gothic ‘whodunit’. Nonetheless, the film is intriguing, especially considering the hardships involved in elucidating a 600+ pages historical fiction into a two hour movie.

In the 14th century, Christian churches faced challenges by the clashes carried out by Mendicant and Benedictine Church orders. The representative of Franciscans argued in favor of the Church to renounce its riches, while, the Benedictine argued about amassing great wealth in the service of God. In this setting, two Franciscan Monks, Brother William of Baskerville (Sean Connery) and his young protege Adso (Christian Slater) arrive in a remote abbey, situated in the hilly areas of Northern Italy. They are the first of Franciscans to arrive there for a theological debate. In that age of irrational religious belief, Brother William seems to standout from other monks as he always uses his voice of reason. Immediately after arriving at the abbey, he determines that something is amiss. He sees a fresh grave at the cemetery. 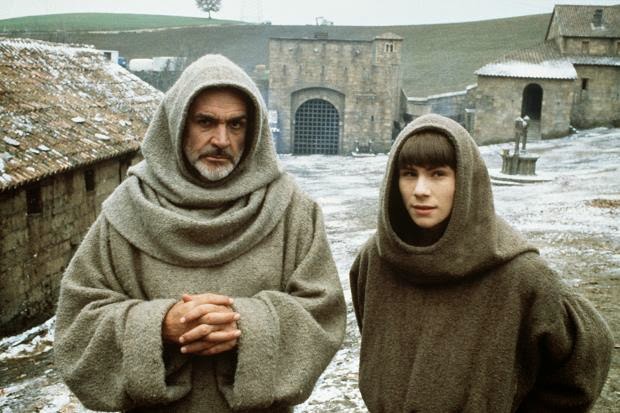 A little later, the Abbot (Micheal Lonsdale) confide to William about the mysterious circumstance surrounding the death of one of the Benedictine monk. The Abbot wants William to investigate whether the death of monk was a suicide or murder. Soon, a second death follows. A monk’s corpse is found in a vat of pigs' blood, which confirms that it was a murderous act and that the deaths seems to be linked to the prophecy of the Apocalypse. The third murder leads William to explore the dark secrets affixed into the walls of monastery, while the Benedictine Monks are surely convinced that the AntiChrist is afoot. William links a forbidden book to these mysterious deaths and the search for this book turns out to be treacherous. Eventually, the arrival of Holy Inquisitor Bernardo Gui (F. Murray Abraham) brings out William’s tangled past and hunts down heretics, irrespective of their crimes. 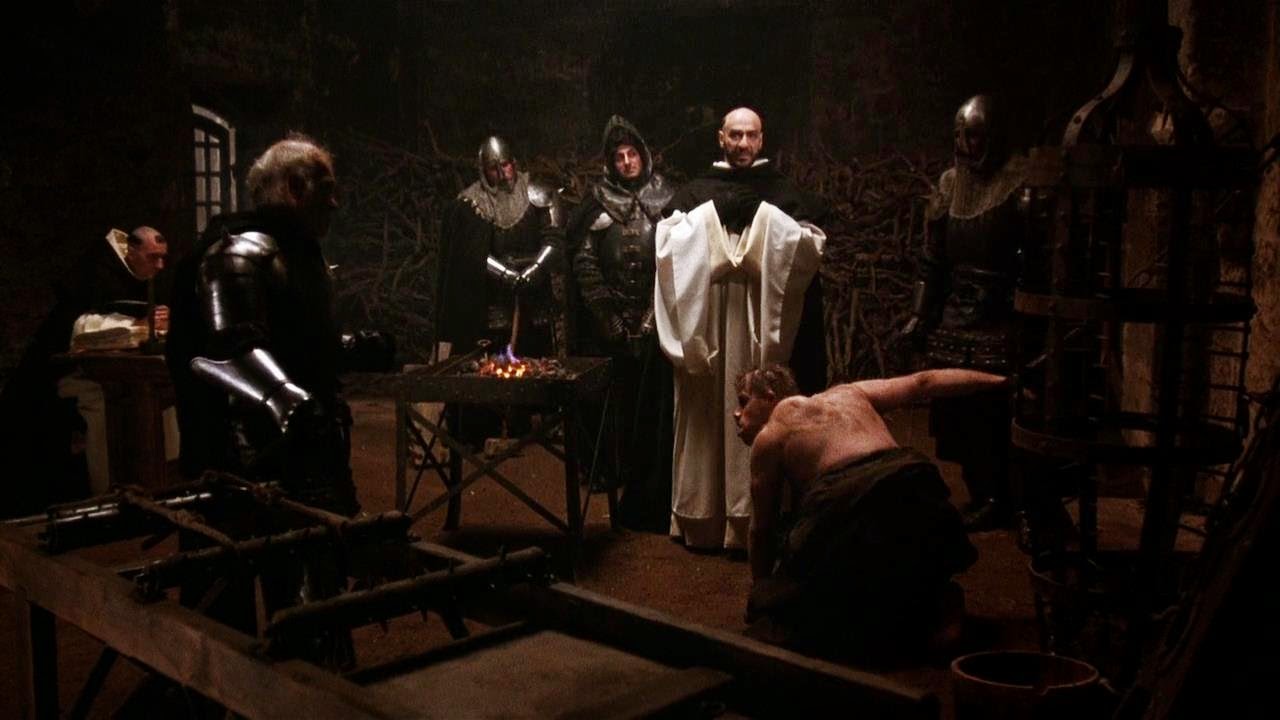 The best part of Arnaud’s direction is that the way he sets up the atmosphere (expertly photographed by cinematographer Tonino Delli Colli) and the characters. The mystery is fairly predictable, but the attention to detail in matter of sets and costumes gives a compelling force to the thriller. Annaud has also succeeded in the casting. His lineups of quirky monks and voice of reason characters are done by admirable actors. Sean Connery wears his usual intense look, which scours the barren landscape looking for a meaning behind its mysteries. Christian Slater finely portrays his perpetual state of confusion through Adso. Murray Abraham’s fiery and evil Bernardo Gui, and ‘Hellboy’ fame Ron Perlman’s hunchbacked, grotesque faced, multi-linguist Salvatore are the two most notable supporting characters. 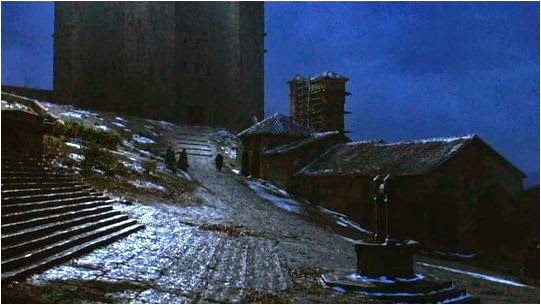 As a viewer, if you hate or can’t get into the atmosphere or strange characters, you will definitely take a strong dislike to the whole movie. It moves in a deliberately slow pace and showcases one gloomy affair after another. Annaud’s was also a bit more focused on an authentic look of the period than on involving the viewers in solving the murder of monks. If you have also read the novel, you might feel that the director must have placed more significance on the book's themes about truth and light and societal differences. That said, I enjoyed the film’s visuals and Connery’s charismatic outing.

“The Name of the Rose” (128 minutes) is an absorbing mystery/thriller that carries us back to the menacing primitive world ruled by primal emotions. It sheds light on the ageless themes of censorship, abuse of power and social afflictions.

The Name of the Rose -- IMDb
at May 17, 2014
Email ThisBlogThis!Share to TwitterShare to FacebookShare to Pinterest
Labels: Thriller

This is a very good movie that offers great insight into the medieval Europe... it's so chilling to see the dark side of the Church and its appointed inquisitors. Connery is brilliant to watch. You review does full justice to the movie.

Have never even heard about this film. Going by your review, it sure looks like a film to look forward to. Will watch it soon

I love the novel. I read it twice with a gap of some 20 years in between. Enjoyed it both the times. I would love to watch the movie too.