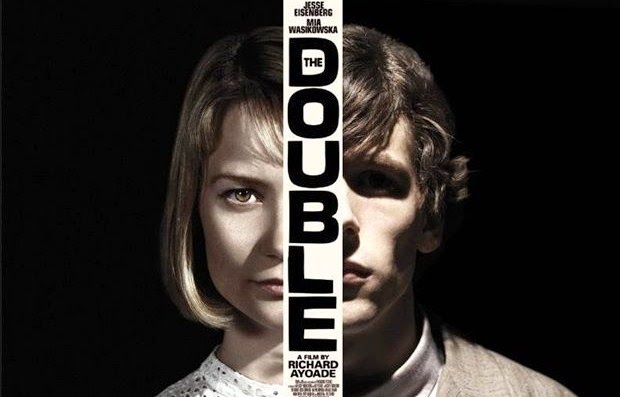 Two movies released last year, explored the enigmatic themes of double. In both these films, a young man crosses the path of his exact look-alike, who then gets inhibited by the other. One is Dennis Villeneuve’s “Enemy” – inspired by 2002 Jose Saramago’s novel “The Double.” The other film is British director Richard Ayoade’s “The Double” (2013) – inspired by Fyodor Dostoyevsky’s novella. “Enemy” and “The Double” raises the question of ‘What is self-identity?’ without giving any clear answers.  Although they explore such same themes, they are far away from being each other’s doppelganger, and “The Double” is more blackly comic than the grievous “Enemy.”

Ayoade takes the densely plotted Dostoevsky novella and sets it in a nowhere land of dingy office bureaucracy. The city is full of outdated sub-way cars, undifferentiated apartment blocks, and purgatorial offices. The weather is always windy and we don’t see sunlight. The people are all dour, lonely a live according to rules. Simon James (Jesse Eisenberg) lives in this nightmarish universe. He works as a low-level office clerk. When he travels in an empty train carriage, a man comes to him and asks to move because he's sitting in his seat. Simon immediately moves. He is a man who obeys orders no matter where it is coming from. The door man at Simon’s office never seems to recognize him, insisting every time that all visitors must sign the book. Simon’s only pastime is telescope-peeping on the girl across the courtyard from his apartment. 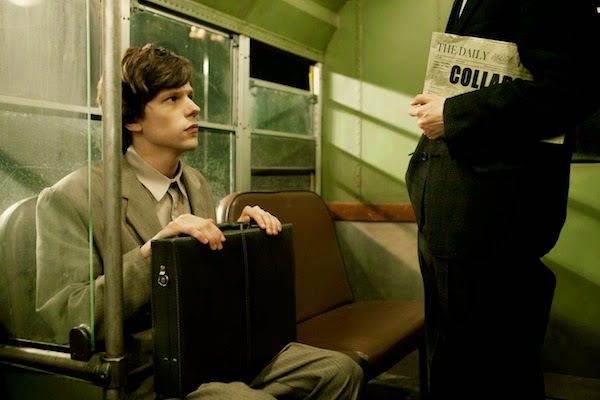 The girl named Hannah (Mia Wasikowska) is Simon’s co-worker. She works in the office's giant, clanking photocopier and mostly shuns Simon and he doesn’t have any courage to speak to her. Even the telescope-peeping is obstructed by a man, living above the Hannah, who commits suicide by jumping after waving to Simon. The suicide investigators of the city happily claim that the neighborhood has the highest suicide rate. They also bet among them that if the twitchy Simon would commit suicide or not. Soon, Simon’s nightmares reach a breaking point when James Simon is hired by his company – Simon James’ physical twin and personal opposite. But, no one in the office or anywhere else seems to notice the similarity. They just chuckle over this fact. James succeeds every where the faltering Simon fails. He dazzles the hotheaded boss (Shawn Wallace) and seduces the boss’ rebellious daughter (Yasmin Paige). James is also a back-stabber as he takes credit for Simon’s unrecognized, yet genius work and also hooks up with Hannah. 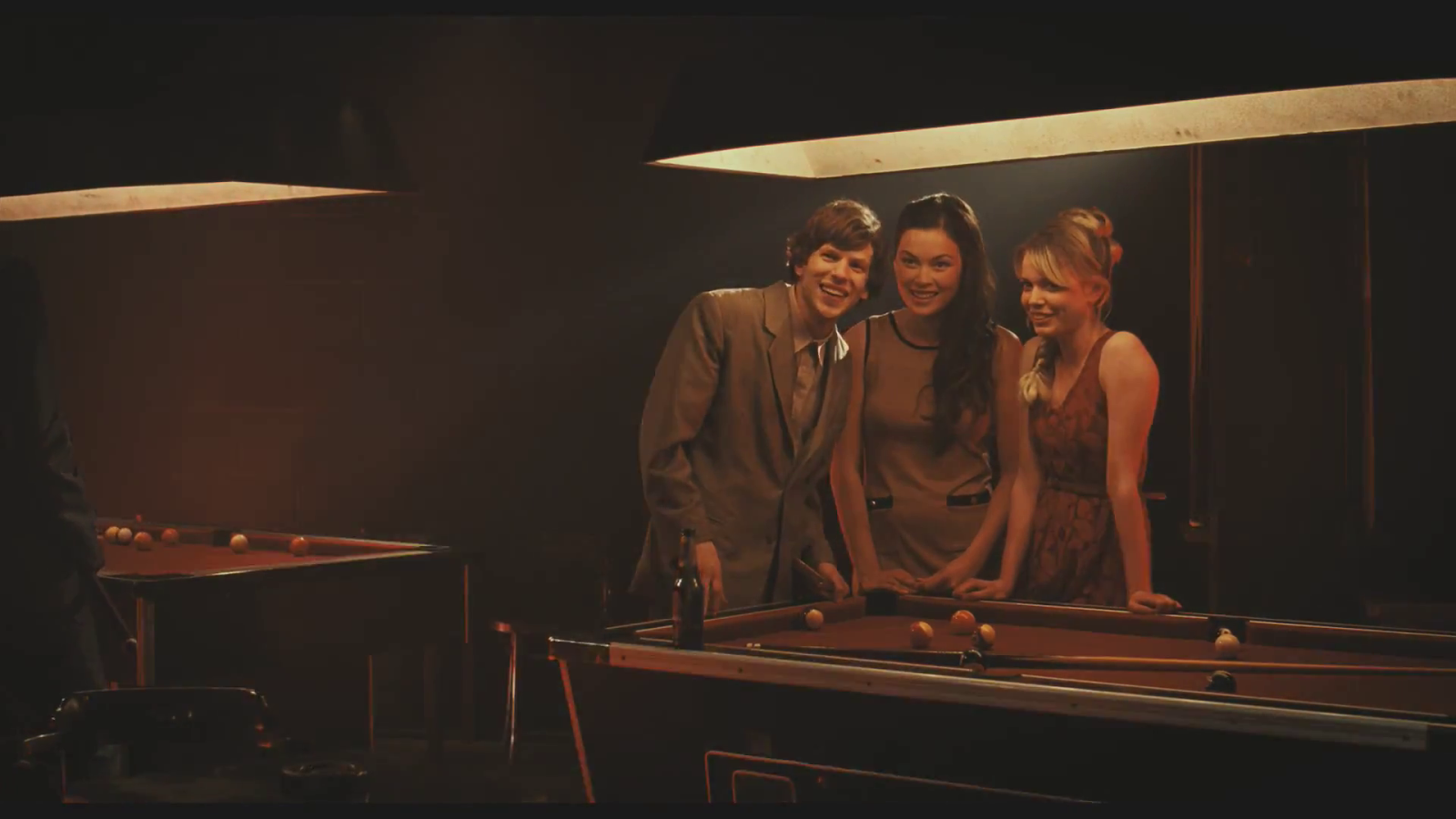 Director Ayoade is best known for his acting roles in TV series ‘Dark Place’ and ‘IT Crowd.’ He made his directorial debut in 2010 “Submarine”, a nostalgic romantic coming-of-age-tale, set in the 1980’s Wales. It was an unusually good modern romantic tale, but “The Double” a particular aesthetic style to his direction. He has taken a big leap by tautly bringing up a powerful nightmarish cinema, tinged with black comedy. Two movies came to my mind when watching the characters and ruthless bureaucratic setting: Terry Gilliam’s “Brazil” (1985) and Orson Welles’ “The Trial” (1962) – adapted from a Kafka’s dystopian tale. Ayoade and Avi Korine’s script sets the tale in an authoritarian dictatorship (run by a man called “The Colonel”), as seen in the propaganda campaign, run on TV. They have included a oddball romance, and deadpan humor to bring naturalism to an otherwise schizophrenic tale.

Ayoade’s direction shares the intricacies of Gilliam (plaster-faced old women and clanking office machines) and Michael Gondry, as “Enemy” shared Cronenberg’s and Lynch’s. Like “Brazil”, Ayoade makes it more a psychological study than a thriller. It repeatedly acknowledges that we are just random cogs built into a rumbling machine to run the world. At one level, we are eager to see how Simon will resist James, even though we know it all will end badly. On the other hand, we could feel that it’s just a parable for the conflict between our real personalities against our foreboding environment, to wish for something emotionally grander. 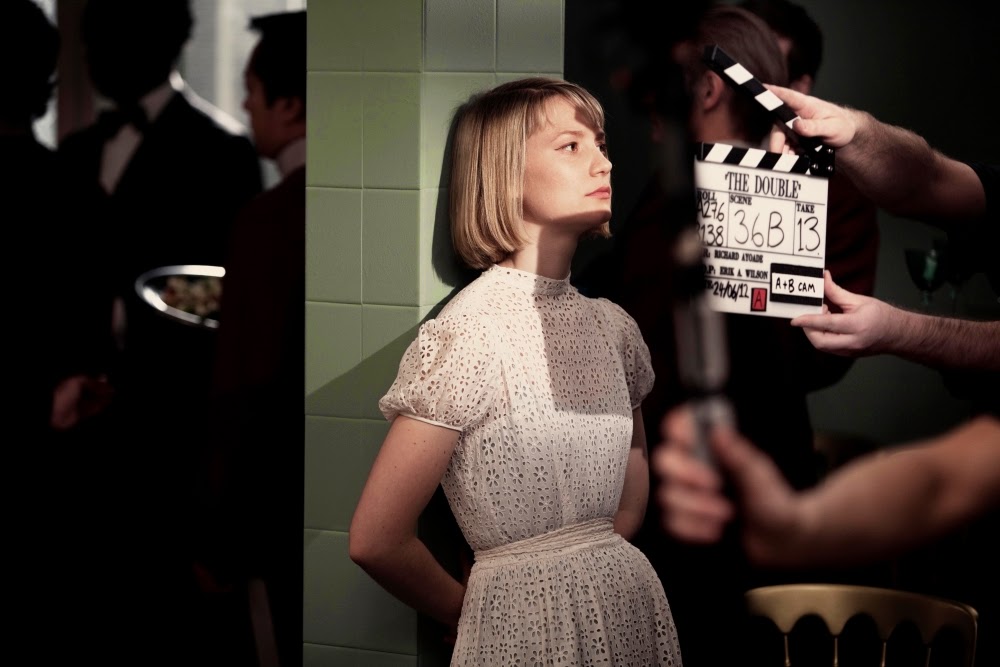 Jesse Eisenberg is turning out to be a superior actor at shifting persona, with only using his expression and posture. There is no confusion as to who is the lonely and ecstatic guy. The interplay between him and Wasikowska gives both the tension and the charms. Eisenberg is signed up for playing Super Man’s super villain ‘Lex Luthor’ in the upcoming Superman-Batman movie. Watching him in “The Double”, you could feel that it is a commendable choice.

Director Ayoade finely juxtaposes the hollow cheerful Colonel’s ad-campaigns with the grim viewers. But, for the most part the political parable aspect remains invisible. If the director has given equal importance to the environment’s politics as much as Simon/James personality would have reached great heights like the aforementioned works from the auteurs. However, despite all these influences “The Double” (92 minutes) possess something original (even in Dostoyevsky's time, his tale is not considered original) and an artistic courage to confront a nightmare.

The Double -- IMDb
at May 30, 2014
Email ThisBlogThis!Share to TwitterShare to FacebookShare to Pinterest
Labels: Allegorical Movies, Magical Realism

Waiting to watch a good movie, Thanks for this post !
http://www.ananyatales.com/