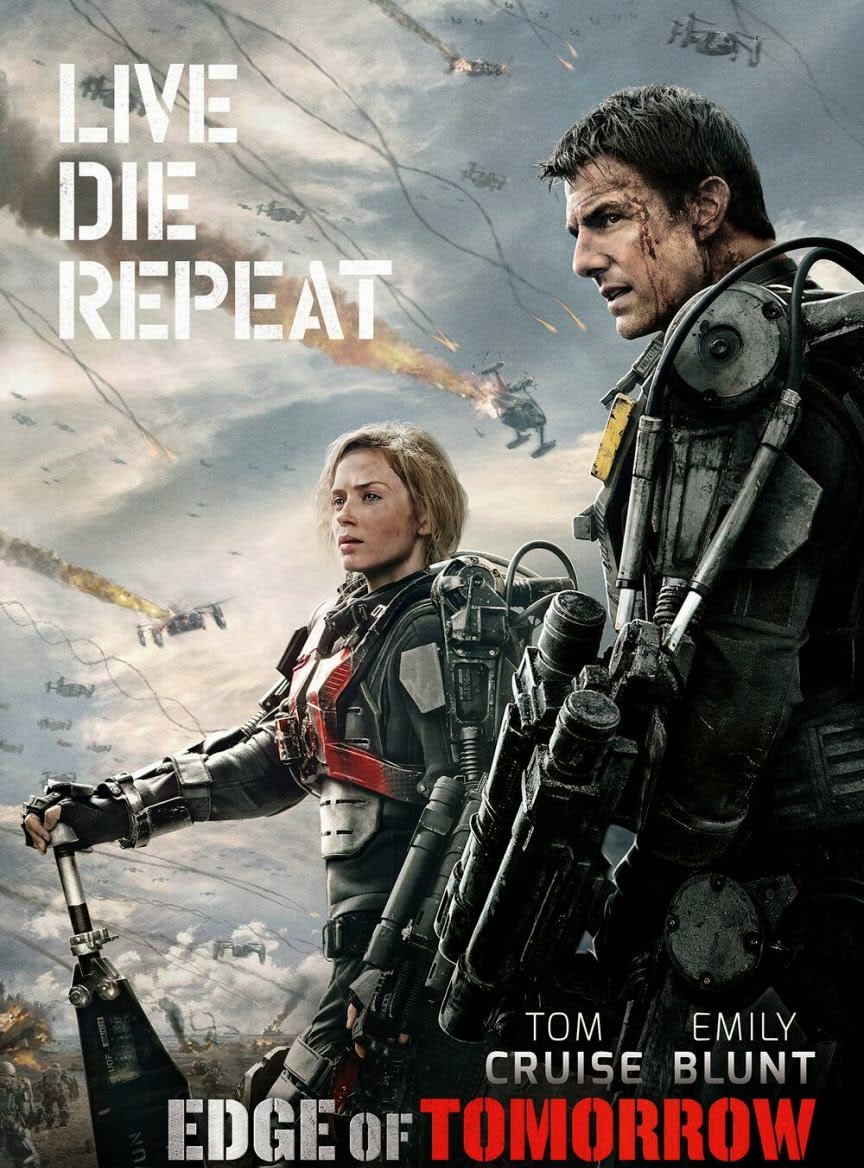 ‘All of humanity is at stake, and an American can only save the world’ – that’s the basic premise for most of Hollywood summer block-busters. Doug Liman’s “Edge of Tomorrow” (2014) pretty has that same beaten-to-death premise. Through the faux news footage montage we see a chaotic Europe under the control of extraterrestrials dubbed the "mimics." A hero needs to rise to change mankind’s fate, and so when you see Tom Cruise is the lead actor, you know he’s going to save us, without wiping the smirk of his face. No, this is where the unexpected happens. Thanks to a better script (which was based on a Japanese graphic novel called "All You Need is Kill"), ‘Edge of Tomorrow’ delivers an infectious entertainment and it is mostly airtight in terms of structure.

Tom Cruise plays William Cage, a military media-relations man who runs recruitment camps, but had never been on the battle field. In the battle against ‘mimics’ humans have lost France, Germany and many other parts of Europe. So, the plan is to launch a D-Day-like invasion on the Normandy coast. General Brigham (Brendan Gleeson) plans for an all-out attack led by decorated war hero Rita Vrataski (Emily Blunt). Cage is summoned and placed under the command of Brigham to film the war in front-line. Cage, being afraid of combat refuses the direct order and tries to run away. His rank is then busted on concocted charges. Cage is now thrown into a infantry squad named ‘J Squad’ under the command of raging sergeant (Bill Paxton). 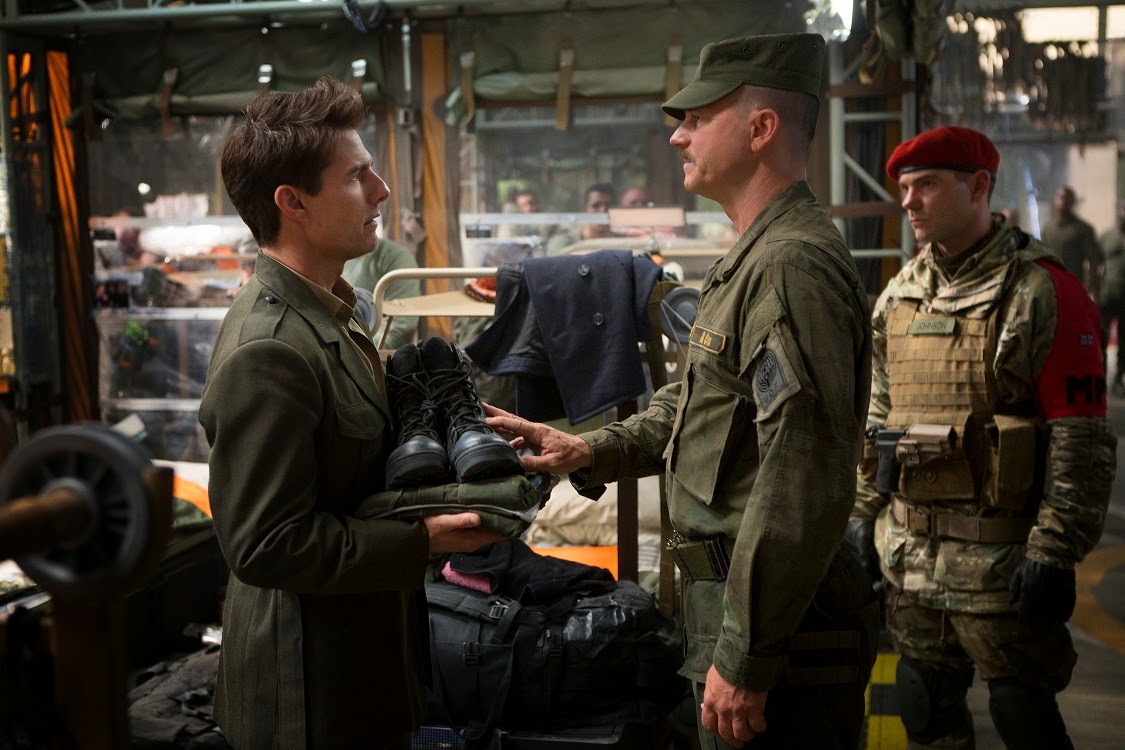 The next day, he is sent into the thick of the fighting and while using an explosive to kill a special mimic subspecies, he accidentally kills himself too. Right after that moment of death, he wakes up again at the start of day as deserter. He endures the whole ordeal again, gets killed, then gets reborn and the cycle persists. At first Cage finds it hard to make others to realize that he's caught up in a time loop, destined to continue forever.  But, things change when he contacts Rita, since she is the only of the few who knows everything about this situation. 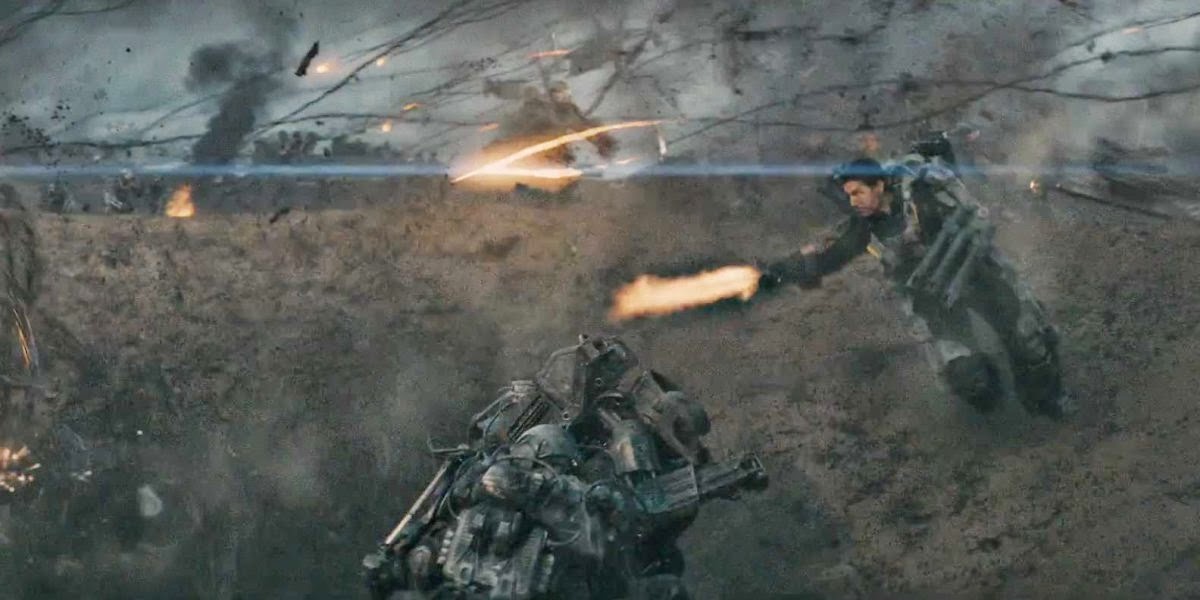 As in “Groundhog Day” and “Source Code”, Doug Liman fully uses the metaphysics of the situation, especially for dark humor. A viewer will definitely get bored watching the same sequence, over and over, even with variations. Liman overcomes this hurdle by showing just enough within a sequence to present that it’s another iteration of the loop. The black humor inherent within each reiteration boosts the momentum. Cruise is squashed by a helicopter, run over by a jeep, blown apart, and even shot in the head. Those who hate Cruise can have a good laugh at the various ways he gets killed. Liman is more impressive for providing precisely what the audiences have come to expect: aliens, roller-coaster effects and super-heroics.

Apart from the mission of locating the aliens’ brain, the other interesting aspect in the film is the subtly portrayed relationship between Cage and Rita. Each time, when Cage dies, Rita’s perspective is reset, but for Cage (like a gamer getting little further) it’s a continuation of a growing relationship. Right at the end, he still remains as a stranger for Rita, while Cage develops deep feelings for her. This inequality in how these two primary characters see each other is equally important as the ‘alpha’, ‘omega’ aliens. 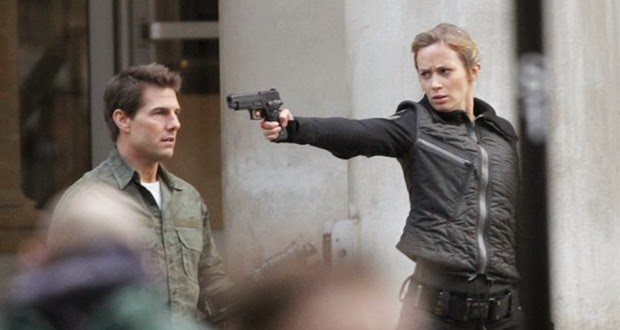 The energetic pace does fade in the second-half of the film, because at some point we know there is going to be a happy ending. The aliens, ‘Mimics’ also never developed beyond being generic extraterrestrial monsters. However, “Edge of Tomorrow” never feels repetitive (considering the film’s built-in repetition) and tedious. It’s a clever action sci-fi film with enough wit and agility.

I was waiting to read you review and I'm glad you liked the film too. This was one of the smartest sci-fi flicks to have come out of Hollywood. It is smart because it knew where to entertain with humor.

It was absolute delight to watch this one. But too much happy ending in the end..no?

@ avirandom, yeah, considering the premise and black humor in the film, it is a very happy ending.

@ Vinay Nagaraju, thanks for the comment. Edge of Tomorrow is a lot better than 'MI4', 'Jack Reacher', and 'Oblivion.'