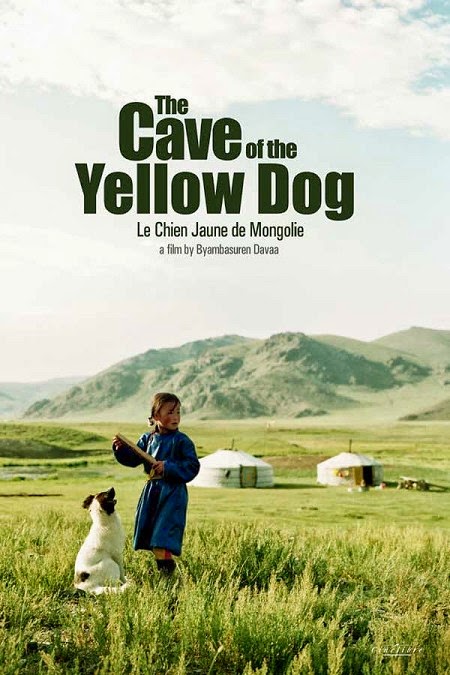 Ethnographic cinema offers an eloquent portrait about a way of life. Sometimes, we see people living in a city that is far away from ours, but facing the same problems of modern ideals. We see the same suited ant armies, yearning to climb over in the ladders of urban life. At other times, we witness an ancient way of life, followed in these modern times, which has an exotic charm to it. We are overwhelmed with emotions in seeing people, who embrace nature and time-honored rituals. The grassland nomads of Mongolia pursue such a centuries-old way of life.  Their nature-friendly life is often loaded onto wooden-wheeled carts. Mongolian filmmaker Byambasuren Davaa’s “The Cave of the Yellow Dog” (2005) depicts the cultural predicament and everyday life of a nomadic Mongolian Sheep-herding family.

In 2003, director Davaa co-directed a beautifully fabricated ethnographic documentary “The Story of the Weeping Camel,” which was based around a Mongolian nomadic family’s newest Camel colt. “The Yellow Dog” follows a different Mongolian family in a different area (grasslands). Like her previous film, Davaa once again portrays the emotional blend of human and animal interdependence. Davaa follows the real, Batchuluuns family and adds lightly dramatized scenes that are gentle and charming. The Batchuluuns live in their yurts and have adopted life that is an exercise in self-sufficiency. The father Urjindorj, in his traditional garb, rides a motorcycle to the nearby town for selling sheep skins and to get the 21st century necessities. The mother Buyandulam is engaged in household chores, makes goat cheese, and looks after her three children. 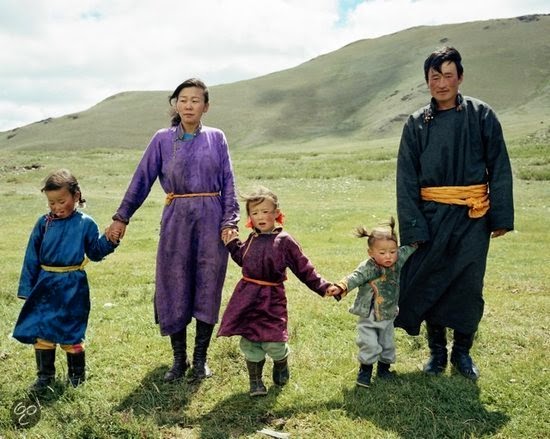 The 7-9 year old Nansal Batchuluun is the eldest child, returns to her rural home from school in the city. Nansal’s younger siblings are the jubilant Nansalmaa and Batbayar. While collecting dung, Nansal finds a black-and-white spotted stray dog near the pasture where her family grazes its sheep. She names him ‘Zochor’ and takes him to her home. But, her father asks her get rid of it, fearing that it is feral dog, which might attract wolves for attacking the sheep herd. Anyone who has seen a ‘girl-and-dog’ story might know the ending, but the way it unfolds towards the finale is absolutely fascinating.

“The Cave of the Yellow Dog” is deliberately slow, making us to mull over the family’s serene life. So, the impatient viewers may find it hard to sit through long, uncluttered takes that esteems the tranquil grassland life. However, a contemplative and compassionate movie-lover may find the same serene rhythm, simply seductive. Director Davaa keeps the domestic routines of the family in the forefront, but at the same time, she also reflects on the Tibetan Buddhist beliefs of reincarnation. The recurring images of a spinning windmill seems to state the theme of reincarnation. At one point, Nansal, while tending her herd gets stuck in the rain and takes shelter in an elderly woman’s yurt. The old woman tells Nansal , a fable about a yellow dog and insists on the importance of human life. It’s a highly resonant emotional sequence. 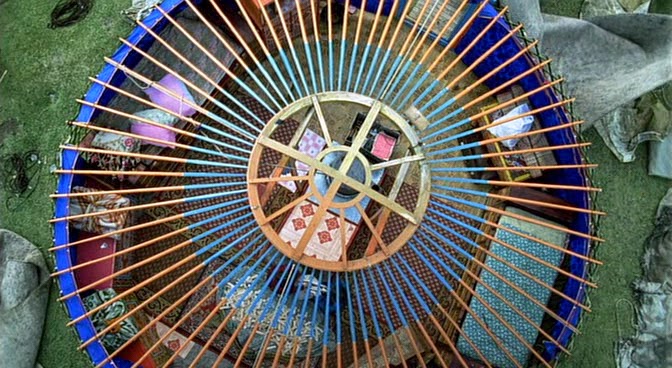 The film ends with a climax that disrupts the air of unaffected naturalism, but for the most part it valiantly depicts the archaic, quasi-mystical Mongolian culture. In her interview, Davaa states that, she wanted to put this way of life on film, because it is about to disappear. As we see the final vision of the nomads' caravan, we couldn’t stop thinking about the devouring modernity that might kill away this atmosphere friendly culture. The father, in one of the scene, talks about taking a job in a department store in the town, mainly to stay close with his children. So, may be in a decade or two, this exalting nomadic life might totally get integrated into the ‘status and money’ pursuing modern life. The ‘Yurt’ plays an important role in the film. Yurt is a portable, circular domed dwelling that was used from ancient times by nomadic Mongols and Turks of Central Asia. The silent dismantling of the Yurt, towards the end, makes us think about our obsession in buying up properties. 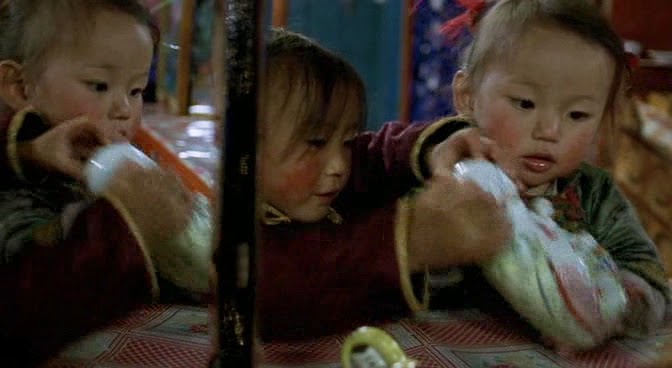 Davaa’s unobtrusive camera not only captures the exotic Mongolian landscapes, but also exhibits a strong chemistry with the family, especially in the way she captures the little actions of children. Davaa completely immerses us into the children’s mind set and makes us see the world through their eyes. In one of the unscripted scene, the toddler Batbayar plays with a Buddha statue. His little sister, Nansalmaa comes in and says in an admonishing manner: “You’re not supposed to play with God.” It was such an extraordinary statement by a little kid that was passed on to her by the mother. Such un-staged sequences are what make it a spectacular cinematic trip.

“The Cave of the Yellow Dog” (90 minutes) transcends the documentary genre, imparting us with soulful messages. It offers essential human truths that are timeless.