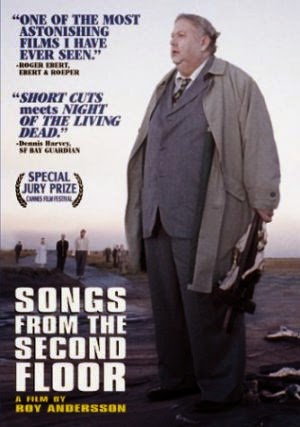 Swedish film-maker Roy Andersson was an internationally renowned cult figure, best known for his handful of short films and innovative television commercials -- even described by Ingmar Bergman as the best in the world. After a 25 year gap (made “Gilliap” in 1975), he returned with a surrealistic black comedy, “Songs from the Second Floor” (2000), which revolved around the upcoming millennium.  Partially self-financed, the film was in production for four years and the end product resembles a Kubrickian, evident especially in Andersson’s overweening perfection. Every shot in the film indicates control and precision. Despite the precise look and original vision, the film has no script or story to speak of.

"Beloved be the ones who sit down,” reads a text at the very beginning of the film.  The text belongs to avant-garde Peruvian poet Cesar Vallejo (1892-1938). The same line is repeated in the film many times and one of the interpretations of that poetic line is that it is addressed, with sarcasm, to the patient movie-lovers. Andersson is said to have first come across the Peruvian poet in 1965. In the 1980’s he tried to make a documentary based around Valejo’s poem, but deferred the idea, thinking that the poem would be better served by the medium of fiction. But, only in 1996, after Andersson honed a supreme aesthetic style, the film’s production began. The results indicate that it was worth the wait for both Andersson and cinephiles. 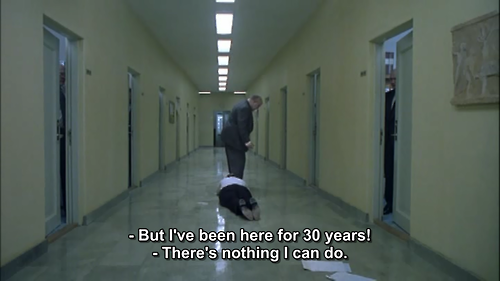 “Songs from the Second Floor” shuns the conventional narrative form and unfolds in distinct episodes, each one examining the absurdity of human existence and the perils of modern life. The episodes are set in a chaotic, millennium-fearing city, where eight-hour traffic jams occur. All the random anecdotes take place within a static frame, eschewing close-ups. The unmoving, (only once in the entire movie Andersson move his camera) distant camera transforms all the forms of on-screen human tragedy into a unique brand of black comedy. In the opening scene, CEO Lennart (Bengt CW Carlsson) says, "This is a new day and age– you have to realize that" to Pelle (Fahlstrom), a submissive chief executive. The CEO stays hidden beneath a tanning machine (only his feet could be seen) and orders Pelle to downsize.

The old, worn-out Lasse (Sten Anderson) brushes off his wife’s request to stay home and goes to work only to find out that he's been fired. Lasse, who has worked there for thirty years -- without taking vacations – couldn’t believe this gross injustice. He grabs Pelle’s leg as he is dragged down the hall. Pelle contemplates a better life and so seeks to escape from the mass unemployment and from the city’s misery. He and his lover, Robert pack all of their belongings, including the golf sticks. In the next vignette, we see a magician making a mistake as he cut into the stomach of the volunteer, while doing the traditional ‘sawing-a-man-in-half trick.’ The central vignette of the film features fat, middle-aged Kalle (Lars Nordh), who travels in the subway with his face covered in ash. Kalle have torched his own furniture store for the insurance money. 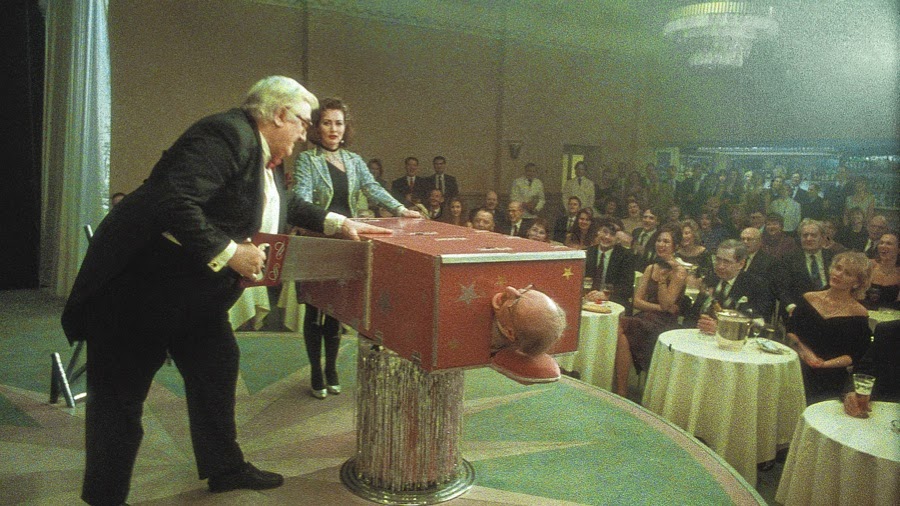 Kalle could sense a sense of guilt creeping on him. His eldest son, Thomas is in a lunatic asylum. Thomas stays in silence and Kalle comments that:  "He wrote poetry until he went nuts." Kalle’s other son Stefan drives the cab his brother has left for him. Stefan is depressed by the confessions of his passengers. In the film’s most surrealistic episode, we watch Kalle getting visited by the ghost of a man who loaned him some money before committing suicide. The fellow haunts him and has also brought with him a boy, who was hanged by Germans in World War II. Kalle also gets in business with a hard-nosed entrepreneur, who believes that there will be surging interest in crucifixes, since millennium or end of world is just around the corner. 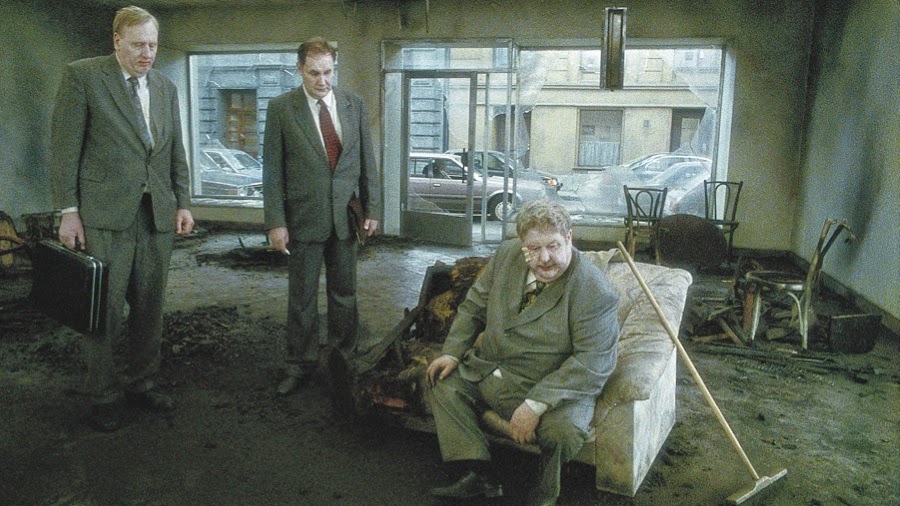 Trying to write down all the vignettes as it is somewhat absurd, since the absurdly comic tone could only be savored by experiencing the film. The deadpan nature of characters resembles Jacques Tati’s movies. The characters are more absurd than funny. All of them live inside some kind of bubble, unable to communicate. Director Andersson relates the painful human existence to the numbing effect of capitalist systems. Through the image of Lasse, clutching the ankle of his golf-playing boss, Andersson shows that how men have become emotionless engines, unbothered by their inherent cruelty. He shows various vistas of societal breakdown (a lot of them surrealistic) in the film: racial violence goes unchecked; suited protestors flagellate themselves in the streets; dead walk among the living; corporate bigwigs inside a multi-storey building perceives that the buildings are moving; A impassive crowd of religious men, financiers and dignitaries sacrifice a child in a last effort to fend off the economic ruin and apocalypse. All these scenes don’t provide any standard revelations of meaning, but resonates with us in a pure visceral way. 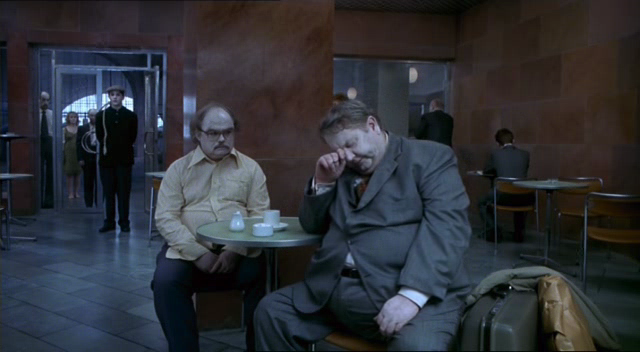 Andersson exhibits human frailty in the sequences involving the toothless, 100 year old army general, who is confined into a hospital crib. The old timer has a bedpan under him as the uniformed soldiers arrive to celebrate his 100th birthday. The enormously wealthy, senile general offers a Nazi salute and asks to convey his best wishes to ‘Herman Goring.’ Andersson religious paraphernalia are intriguing to a point. Through one of Thomas’s fellow mental patients, Andersson says, “Jesus was not the Son of God; he was only a man who preached kindness.” By this statement, he raises the question: why would humans torture and crucify a man who only preached madness? Once again the unrelentingly pessimistic answer is that men are innately incapable of kindness. The final ten minute single take -- where ghosts of past come back to human beings -- depicts a deep allegorical meaning. 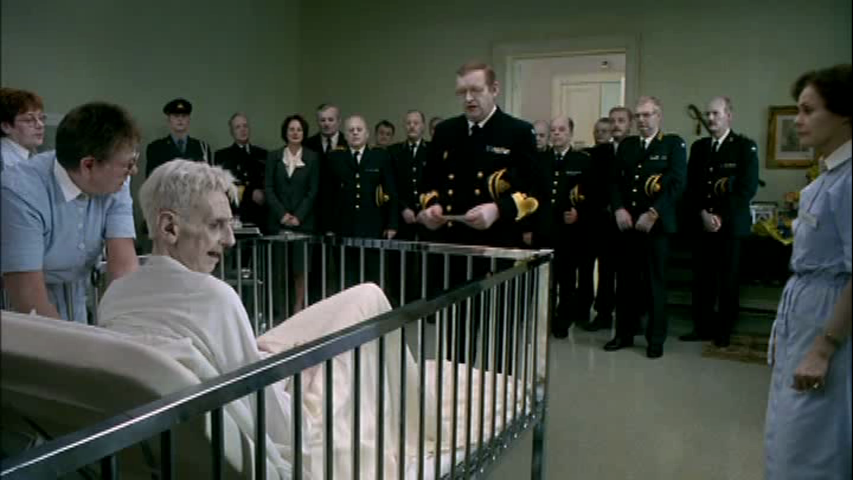 All of the non-professional actors have lumpy bodies, dressed in ill-fitting clothes with a ghastly pale make-up, expressing a weary despair. The character are mostly chosen for their physical structure rather than acting skills. Each and every shot of Andersson has the precise compositional balance of a photo-realistic painting. A subtle blue and green color is used to strengthen the film's bleak emotional landscape and pale characters. There are some down sides to this unrelenting tone. After a first-hour, the continual practice of this consistent technique may cause some fatigue. It gives a feeling of getting trapped inside a never-ending dream. There are also many Y2K references, which make the doomsday hype irrelevant and dated. Despite these flaws, there is no doubt that this movie is an unsung masterpiece from a genuine artist (Andersson’s follow-up “You, the Living” (2007) is equally astonishing).

“Songs from the Second Floor” (95 minutes) is a strangely amusing allegorical drama that points out the absurdities of human behavior. Its dystopian vision asserts that misery, despair and guilt are the inescapable, universal human condition.