Poetry -- A Poem of Anger, Compassion and Yearning 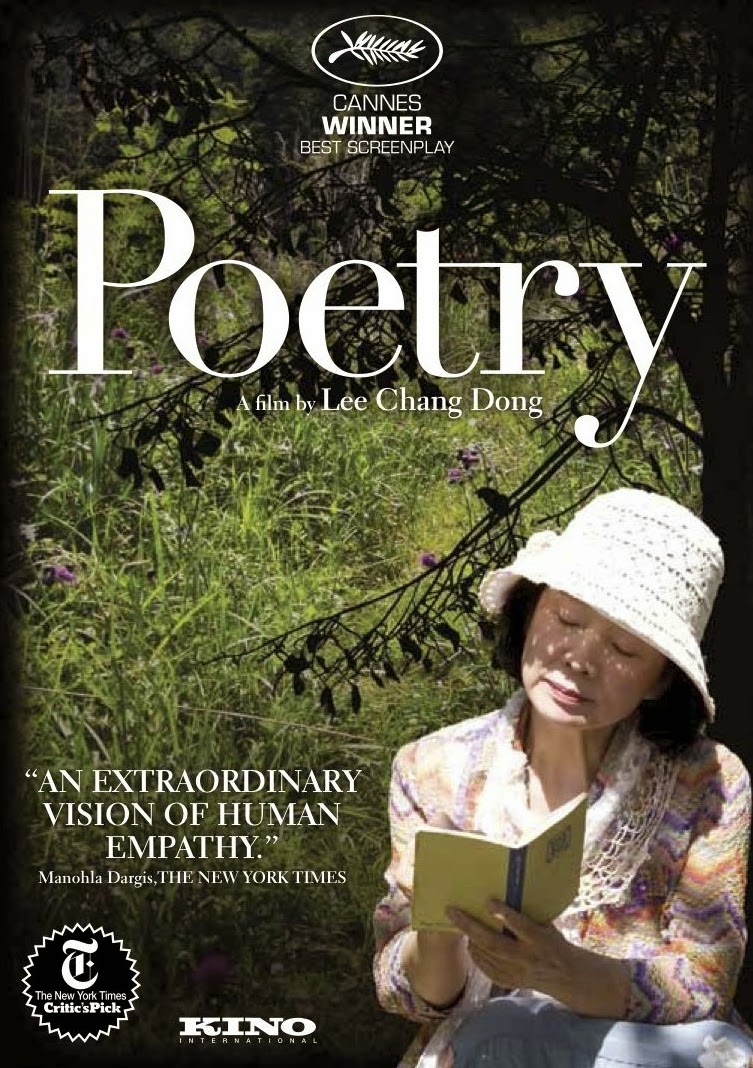 Contemplating grief and guilt of the human existence is what defines the work of South Korean film-maker Lee Chang-dong. Lee’s meticulously crafted psychological dramas “Peppermint Candy”, “Oasis”, and “Secret Sunshine” was all thought provoking and emotionally shattering, without ever stooping to melodrama. His recent sobering metaphysical work “Poetry” (2011) tells the tale of a grandmother caught in a circle of guilt. ‘Poetry’ won the best screenplay at the Cannes Film Festival in 2010 and is blessed with a nuance performance Yun Jung-Hee as the grandmother.

The film starts with an unsettling silence, in which children playing along the banks of Han River see a body floating down. Then we are introduced to sixty-six year old Mija (Yun Jung-hee), who wears beautiful, graceful clothes and white hats. For the last few days, her hands have got prickly and she isn’t able to remember mundane words like ‘electricity’, ‘wallet’ and ‘bleach.’ Her doctor recommends exercise for the hand and to get a thorough check-up for forgetting the words. Mija works part-time, taking care of an elderly, unpleasant stroke victim, cleaning and cooking for him. On her way to the job, she sees the mother of the girl, who has committed suicide by jumping off a bridge, falling into the river. After witnessing the mother’s grief, Mija feels something deep inside, which couldn’t be expressed by words. 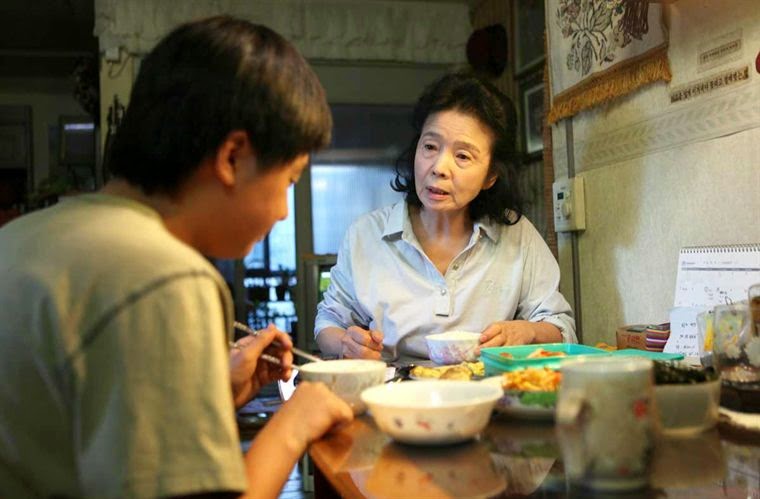 She returns home in the evening to take care of her teenage grandson, Wook (David Lee), who always wears an irksome expression on his face. Mija’s daughter lives in another city, leaving the son under her care. Next day, she enrolls into a poetry class and her earnest poetry teacher asks his group of students to find the inspiration for writing poetry. Mija looks for poetic inspiration. She talks to trees, observes flowers and fruits, and takes notes of the words as it comes to her mind. But, her poetic quest is barricaded by two problems. Mija’s ill-behaved grandson was one of the classmates of the girl who committed suicide. The girl has left a diary, which says that Wook along with five of his friends had repeatedly raped the girl at school. 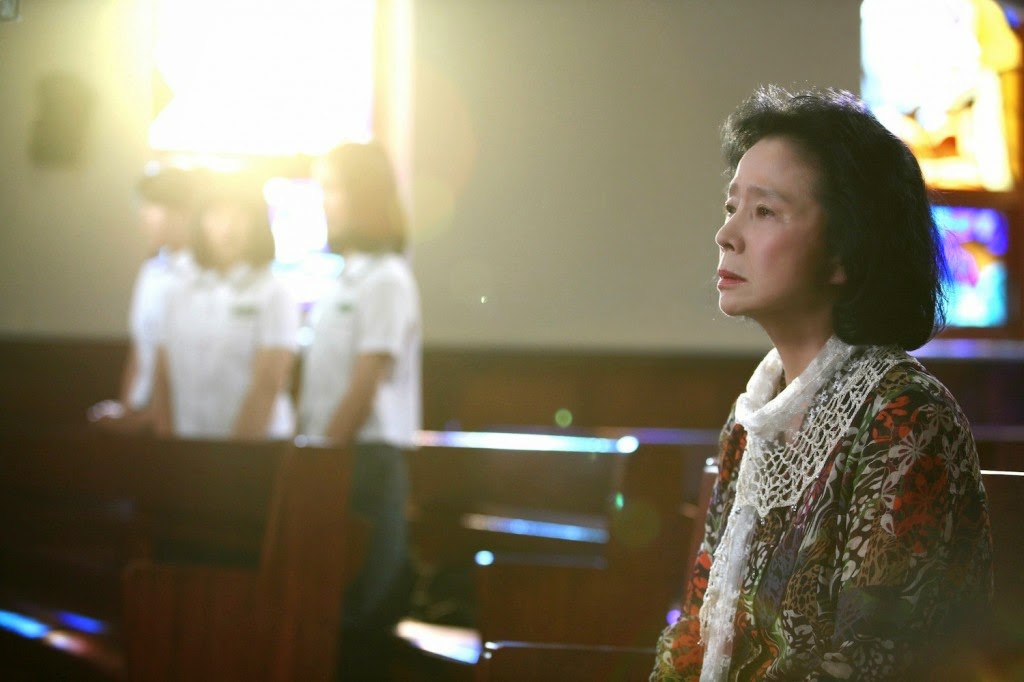 The boys’ fathers and Mija have banded together to talk financial compensation that is to be offered to the mother of the girl. They have also made measures to keep this incident out of police and newspapers. Mija is shocked to hear that her grandson has done such a despicable act. She frantically looks for the money to pay off the mother and at the same time she can’t cope with this moral ugliness. The other problem she faces is her memory. The doctor tells that all her recent memory problems are due to Alzheimer’s disease. But amongst all this frustration, Mija seeks for the beauty that might inspire her to write the poetry.


Director Lee Chang-dong shows Mija’s sudden interest in ‘poetry’ as some sort of existential panic. Mija seems like a chatterbox, but no one around her seems to be listening to what she says. She takes poetry class to express herself in a crisp manner. Then as problems strikes, her quest to write poetry becomes a way of coping with the struggles she had experienced with her consciousness. In one scene, Mija sits under a tree and stares blankly at the paper, unable to find the inspiration for the poem. At that time rain falls down on the paper, like tears falling down from the eyes. This extraordinary scene aesthetically articulates her feelings. The poetry writing is also expressed as some kind of irony: a woman trying to learn to speak a new language, while she is unconsciously forgetting the one she already knows. “Poetry” also shows us a patriarchal society, where men throw money at others to contain their problem. Men, who are trying to protect their sons, without showing any real regret for their brutal crime. Mija is the only symbol of compassion among these men. We know through her compassion that she is the sanest person among the problems. However, her innocent questions and concerns make her an outsider. The hurt Mija endures is shown to have affected her role of caregiver. Her wealthy, crippled, sad-sack boss takes a pill and asks to have sex with him. Mija first refuses him and later submits to him as an act to empathize with the dead girl. This act, later, leads to an epiphany. This was one of the disturbing scenes (similar to the one we witnessed in “Oasis”) that showed the psychological effects of her grief and guilt.


Lee Chang-dong avoids the usual melodrama that is inherent within such a story and takes a more patient approach. He slowly and impeccably forms a haunting picture of a woman whose every behavior is an act of yielding to the institutionalized male aggression. Lee and his cinematographer Kim Hyunseok perfectly captures all the moments of serenity and spiritual succor. This crystal clear natural world, full of poetry, seems to confront the muddled inner guilt of human beings. Two wonderfully directed scenes stayed with me: one was that of foul-mouthed cop trying to impress the poetic circuit; and the other was when Mija placing the girl's photograph on the breakfast table, looking to force out some kind of reaction from her grandson. The poetry in the end is very poignant as the central character is only heard not seen. There are no big flaws, but the long interviews of Mija’s poetry classmates, though feels prosaic, could have been trimmed. 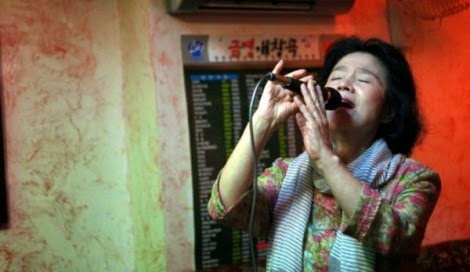 Veteran actress Yun embodies the pleasantness of a talkative grandmother, whom we may have encountered in our life. She registers earnest curiosity when looking for poetic inspiration and expresses a muted discourtesy when faced with anger. There is something touching in the manner she drags her grandson out to play badminton with her. She is looking to see a little boy playing with his grandmother, but what she only encounters was a surly guy. Yun was said to have returned to films for the first time in 15 years to portray Mija.


In “Poetry” (139 minutes), director Lee speaks a language of his own to exhibit a haunting expression of life – that is full of disappointments, wickedness, beauty and fresh possibilities. It is a brave and resplendent work.